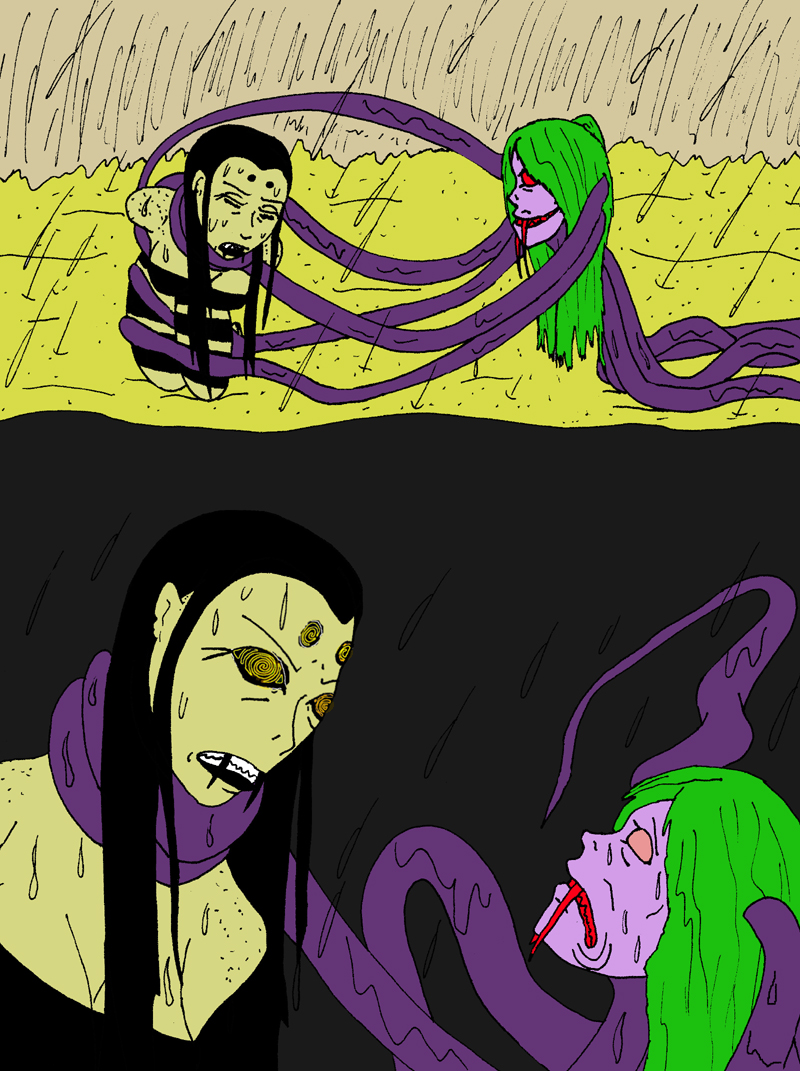 "Well, I'm here, buttercup," teased Argilla. "Is this better, fool? Oh... your eyes are closed. Now, how could that be? I thought I heard that I was the coward and-"

Bali's eyes, including the small glassy orbs above her brow, opened, revealing a swirling spiral pattern with a orange glow. Argilla stopped mid-boast, staring confused. "What is... wait... what are you... feel... weird..." she said, stammering.

Bali's expression was dark and angry, her eyes wide and intense, glaring into and through Argilla's eyes, which began to dim from red to a soft pink. "You think you're the one to conquer me? Master me? YOU?" hissed the spider woman derisively. "You haven't earned it. You haven't earned any of this. You think I'm something you can win? YOU HAVEN'T EVEN TRIED." The more she spoke, the angrier she became. "Pathetic!"

Argilla began to cower and twitch, almost convulsing. She found she could no longer look away, blink, or assemble cohesive thoughts. The spiral gaze entered into her skull and began to dismantle her thoughts and speech, piece by piece. "What... is... stop... stop i-it..."

"You think I'll die to you... for some lackluster reason such as your boredom? This is not how mastery of another works, Argilla! I will not bend my knee to you willingly so you can torture and kill me on a whim, let alone anything else. I don't respect you even vaguely enough to acknowledge you as an Alpha or a victor!" Bali's voice began to echo and reverberate, sounding alien and unnatural.

Argilla's tentacles began to slide off, trembling out of control as she lost motor functions. She couldn't think straight, move, speak, or react. Only now did she begin to howl and shriek, as the spiral began to trigger instincts of her own powerless oblivion. "Purreaassse.... muah.... sshhhtop....!" she slurred, reaching incomprehensibility.

Argilla could only scream incoherently, her now whitened eyes tearing, unable to look away from Bali's hypnotic gaze. Bali knew her opponent's mind was broken. She had suspected her aggressor wasn't truly strong and the ease of this proved it. Now it was time to tie a bow on the mesmerism before her reserves of shadow essence faded.

"Upon first light, you will stare into the rising sun until you can witness it no further. Know this, you're not even worth killing. The worst thing I could leave you trapped in your own mind as you are, with the realization that every day you awaken, you'll still be you. Pathetic, inept, and weak. Get out of my sight, worthless mongrel," snarled Bali-la. The command issued into Argilla, she blinked and recoiled away into the water, screaming shrilly. Unable to resist, she would be struck blind the following day, at least for a time until the shadows allowed her to recover. But because Bali drove home the point of her weak character, Argilla's will to survive would be diminished, which would make the recovery take much longer.

Released, Bali closed her eyes and slowly reopened them, revealing them to return to their softer orange gaze, sans a spiral. Panting a bit as the rain struck, she readjusted her thong loincloth, and shook her head wearily. If she had not fed on Saiya earlier for shadow essence, she knew she might not have had the strength to use her gift of hypnosis. And in her fatigued state, Argilla likely would have followed through with physical violation, near lethal feeding, and ultimately execution of Bali.

Had Argilla more thoroughly beaten Bali, instead of demanding a 'prize' quickly after little more than a grapple, Bali might have been forced to surrender, although she still would have fought for her life, albeit poorly, when the time came. It was not something humans would easily understand about their kind, let alone want to, but Xibalbans were driven to follow pecking orders in a complex system of domination and neck baring actions. Xibalba was not a kind place and she was not above it. But some people, like Argilla, were beneath it. And for that, there was a price to be paid.

A code of conduct among predators, eh? It does make sense, since outright slaughter would not only thin the ranks, but possibly lead to much bigger conflicts. Somebody "going renegade" against these rules would not only be seen as deserving of harsher treatment, but couldn't convince the clan to avenge them.

Quite. There's actually even more background reasoning to it, but that delves into the history of the Xibalbans and why they uphold their specific standards. Still, you get the idea. If someone gets labelled as a 'killer', they're ostracized from their clan (their own people will even out them to other tribes) and their time is potentially very limited. Xibalbans practically hold the laws of survival as a religion in itself. 'Live to fight another day' is important to a lot of them, not only for sake of actually living, but personal honor.