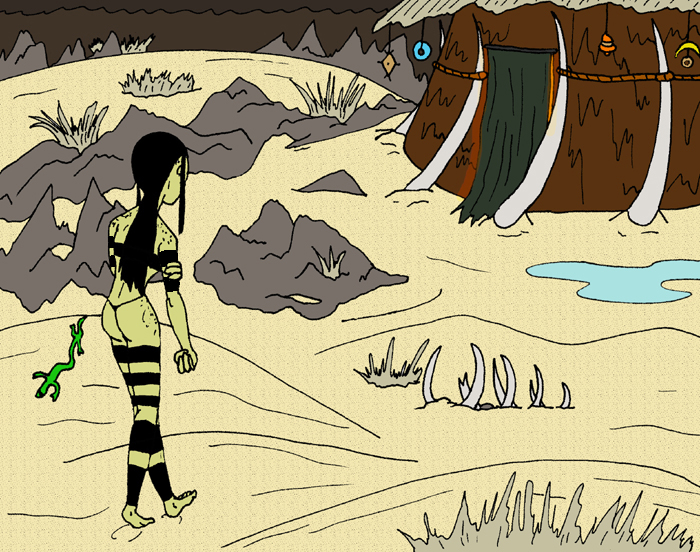 Allowing herself some modest piece of time to recover, Bali shook off the experience of the attack and stretched. She was not concerned that Argilla might return- she could see the suggestion was drilled well into the tentacled head from the Sandbar tribe. She would not return easily and would probably experience an abrupt and inexplicable mental trauma if she saw Bali-la anytime soon. Her hypnotic gaze was not to be used lightly.

She learned the trick a very long time ago, alongside dancing, singing, and other skills that would benefit her caste. But hypnosis was definitely amongst the more advanced ones. Although her clan was filled with assassin types, regardless of their castes, Bali generally preferred not to kill. She enjoyed softer forms of thwarting others. But the gaze was something that could be easily misused. Against the weak minded, one could inflict terrible thoughts and visions on someone's psyche, and that was something even the shadows did not fix easily. That said, it had limitations. It only worked on the sapient, so animals and many other creatures were right out. The strong willed could resist and even break her suggestions in time. If a creature didn't have eyes, it was completely useless. And further, it could only be focused upon one other being at a time, which usually required time. If she were being attacked by multiple aggressors, she wouldn't be able to break anyone's psyche without being vulnerable herself. And of course, it required use of her shadow essence reserves. Fortunately, she was still satiated from feeding off of Saiya earlier.

Bali returned to her quest of finding cover from the rain, but it soon abated on its own some time after her engagement with Argilla. The air was moist but cool and she found herself wishing for some heat to refresh the strain in her bones and muscles. The fight left her even more sore, thanks to Argilla's less than gentle grappling. She needed to recover before she could find out what happened to Karolina.

However, as she scoured the area, she found it was a mainly barren small island. Just sand, rocks, dune grasses, and tiny animals such snake bodied geckos called it home. There were hardly any trees. The sky remained dismal and dark. And still, she had no idea on her bearings.

One feature alone stood out; at the higher point of the island's rockier elevation, she spied upon a yurt made of animal hides and giant tusks, secured with a hemp or flaxen rope. The roof was thatched with local dune grasses and decorated with a number of wooden and bone bangles, which chimed haphazardly in the damp wind. A soft orange light emanated from behind a draping fur tarp door, which spoke to her of someone civilized living here.

She was uncertain if it was wise to happen upon anyone else now, as she was still not in fighting trim. But it was rare that she did not take a chance or at least try something when presented with an option, so with little hesitation, she approached, trilling a soft wordless tune which might soften a more severe response to the listener. Or so she hoped.

I dunno, is approaching this hut a good idea even with the rain? I would think that the weather would not be as deadly as potentially another opponent. Or is there something about the weather that makes it far more dangerous than normal?

More to the point, it's not even raining anymore! Just wet and soggy outside now. She wants some shelter (she was originally hoping for a cave but there's nothing on this island apparently) since she feels like a drowned rat since waking up on the beach. But you're right, this is probably not one of her better ideas. By her own earlier admission, Bali is reckless at times. This is certainly one of them.