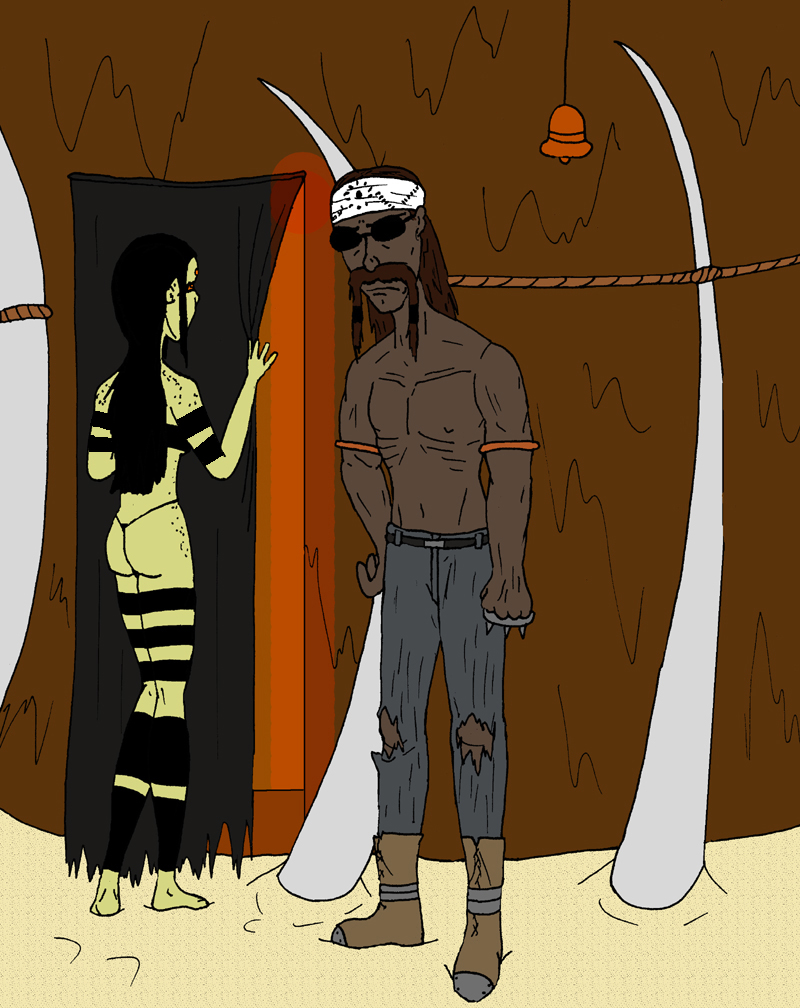 It did not take long for the tarp curtain door to waft before her. Someone looked back ever so briefly, but said nothing before releasing the shroud. There was a grumble on the other side and what sounded like concise movement. Bali slowed and stopped her song, wary. She knew this wasn't necessarily the best course of action now; seeking shelter for exhaustion's sake, despite the ceased rain. But she was naturally a bit impulsive and was no stranger to just diving into a situation. She also didn't fear other people or Xibalbans... not on their own, anyway. She suspected the yurt could not have held many people inside it and seemed unlikely to her that more Sandbar barbarians would be inside. Patiently, she waited, ready to apologize and back away if she wasn't welcome.

A tall man of dusky dark skin emerged forth, gazing at her from behind a thick horseshoe style mustache. He was bare chested, wore sunglasses, ragged jeans, and cobbled together boots of metal and leather. He was tall and rather strong looking, with a single spiked knuckle clenched in one hand. Above his brow, he wore a stark white patterned bandana which helped cascade his long brown hair. Although she had announced herself with a soothing song, he looked upon her sternly, and with irritation. "Blimey... what now??" he grunted out in some accent that was only partly Australian. He looked her over up and down. She couldn't get a good read on him, thanks to those glasses.

"Excuse me... my name is Bali-la. I don't mean to bother you, but your hut looks warm and secure. I've recently washed up on this island and I can find no other cover. I was hoping I could catch my breath by a fire, perhaps?" It was forward, but better to put her cards on the table.

"Of coursin' there's no other cover here, bloody galah. There's nothing here, period. I swear, I set up me yurt in the loneliest place possible, and suddenly... everyone is knocking on my door. Oi. Just can't win." He looked her over up and down again, and sighed. "So what bloody group are you with there, shiela?"

"Erm... Death Clan," she said, swallowing hard. The tribe was feared, and anything but popular as a result.

"Oi. A spider girl? Asking MY permission? Surprised you didn't just try to take the bloody house for yourself. You must be out of all sorts to be askin' me nicely."

"I'm sorry... I can see I'm unwelcome," she said, quite aware of his suspicions. "I'll take a breather down by the beach, then. I wasn't looking to cause any trouble."

"Eh, the beach? Nah, I don't think so, spooky. There's some right nasty piece of work always lurking by the shoals and dunes. She'll just as soon eat ya or something."

"No, but she's been neutralized. I don't think she'll come back anytime soon," said Bali, not wishing to gloat over her vile attacker's humiliation and mental maiming. She was quite content to forget all about her, if anything.

"Well, shite! That's different. Last thing I need is another bloody freeloader, but you've done me a fine enough service if that monster is gone. Come inside, if you will. I've got company already. But keep in mind- you try anything? It won't end well, lass. I've dealt with 'Xibbies' before and I'm still here. Do we understand each other?"

She smiled cautiously. "Yes, thank you for your hospitality. Don't worry, I won't stay too long."

He watched her peripherally enter his hut, and then scanned the scenery outside once more. Sniffing the air, he sighed to himself. "Blimey. Bloody damn rain never ends lately..." Moments later, cool drops fell again, albeit softer than before.

No tentacles. Good. Not hungry for flesh. Good. Your classic gruff hermit (how many hermits are actually sociable?)

Hard to say. Many of them don't want to appear on a census!