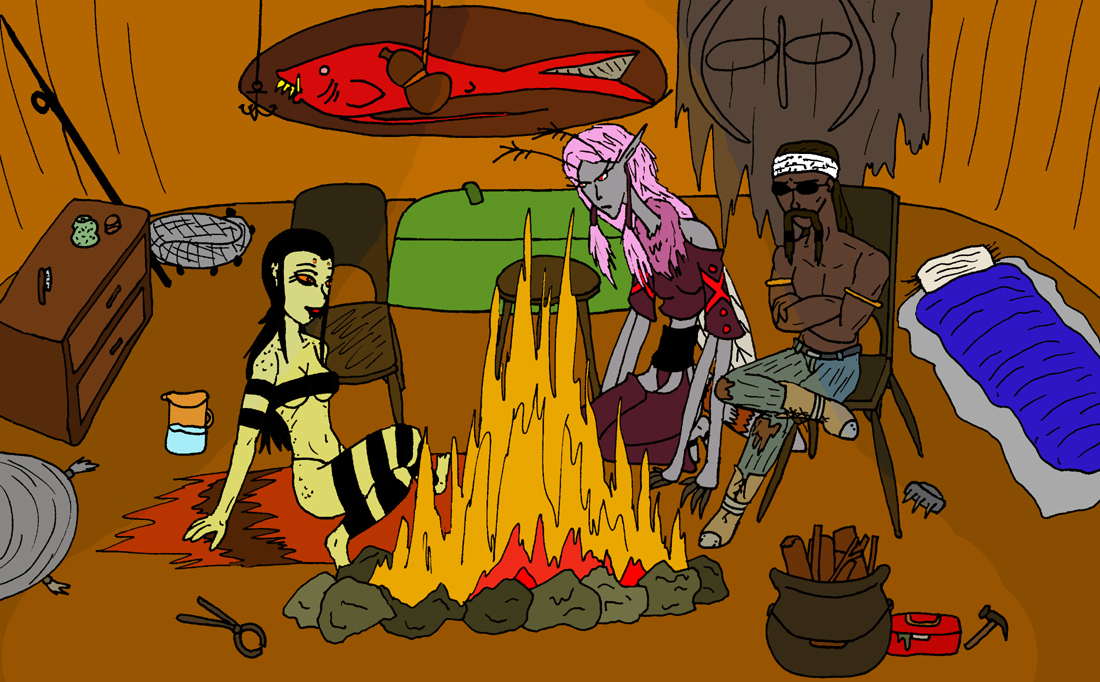 Slipping inside, followed shortly behind by her host, Bali found the man's hut was delightfully warm and dry, as the the pitter patter of rain slowly began again beyond the animal hide tarps that composed the walls. Various tools of humans and fishing gear were scattered about, but it wasn't messy either. With the inclusion of an unusual red scaled fish dried upon a mantle and in light of the bone supports outside, she concluded this man was likely a skilled hunter. His home had a dresser and chairs, which suggested he lived here full time and was quite capable of independently surviving.

She then noticed the guest he mentioned, sitting aside of the fire as the owner sat down next near to that person. It was a Xibalban woman of mosquito-like features, one of the Bloodflower clan. They were reasonably common, occupying areas similar to the Longtooths, but mainly content to be anywhere where other living creatures could be found, due to their highly vampiric needs. Their two clans were not allies by any means, but Bali knew she had little to fear from one of them. The Bloodflower woman looked at her with a mix of suspicion and disagreement, recognizing her for what she was as many barbarians could, but there wasn't likely to be a fight. Her people were not particularly tough on their own, as far the assassins of the Death Clan were concerned.

She was much taller than the man or Bali was and notably thinner. Her hair was pink and full, with long pointed antennae and brow, while her muave toned clothing covered much more than what Bali had on, being a bit more concealing a modest margin than what many Xibalbans in their hybrid forms preferred. Bali gave wonder to why she was here. She didn't seem injured or visually exhausted, and the man seemed to imply she wasn't a permanent resident.

"Hello there," Bali said, sitting down on the opposite side, trying to remain at least be diplomatic. After all, she had no reason yet to hold ill intentions towards her. "I'm Bali-la."

There was a lingering cold stare and then a resigned sigh from the Bloodflower. "Hail, Death Clan," as if announcing it meant something. Maybe she wasn't aware the man already asked.

"Good. Glad to see you're not at each other's throats," he grumbled, crossing his arms as he observed Bali. "Dont' mind me saying, but Xibalbans can be unpredictable with each other sometimes."

"Tulsan Mune," he grunted. "I'm not formal, so don't bother with a title, thank you. And yeah, you're welcome about the fire."

They looked towards the long faced Bloodflower woman, who shifted awkwardly in the social expectation, although Tulsan almost certainly knew. "Astrile," she said after a moment of hesitating, pronouncing it phonetically as 'Az-trial'. "Mm... that song just before, that was you?"

The Bloodflower woman took a deep breath. "I must say I liked it, however short it was. I didn't associate the Death Clan with such sounds." Her face was still suspicious and it almost seemed like the compliment was a strain on her psyche.

"We're all quite different. Some of us have learned to carry a tune. We're not all true assassins as you might know of us," Bali offered, although she knew it wouldn't be convincing in the face of inquisition.

Astrile shifted again. "And yet, it was you who 'dealt with' that Sandbar killer on the beach, were you not?"

"Ah... well, um... that is true. But she isn't dead, I assure you. Just... hmm, very discouraged from picking on anyone from here again."

Tulsan remained quiet, just observing their conversation, as Astrile seemed to take that in. "You're being vague, but... I believe you," she stated dryly. She glanced to Tulsan for a moment, wondering if he was going to say anything, but he remained almost intangible behind his shades. Fuzzy pink pedipalps that Bali originally assumed were fronds of hair from behind her long pointed ears, scratched idly at Astrile's rather elongated throat. It was here that Bali could tell it wasn't simply suspicion that Astrile was harboring towards Bali, if at all. It was anxiety, just not as obvious as Karolina's.

Tulsan coughed and sat forward a bit. "So, how does a spider get out here in the middle of nowhere, across a dangerous sea?"

Bali blinked, as it dawned on hers why there was discomfort in the tent. The two of them thought Bali had ulterior motives still. Knowing that simply saying she didn't wouldn't suffice, she nodded and began to share her story from the beginning with Karolina. There was nothing like a good tale to take one's mind off more immediate worries.