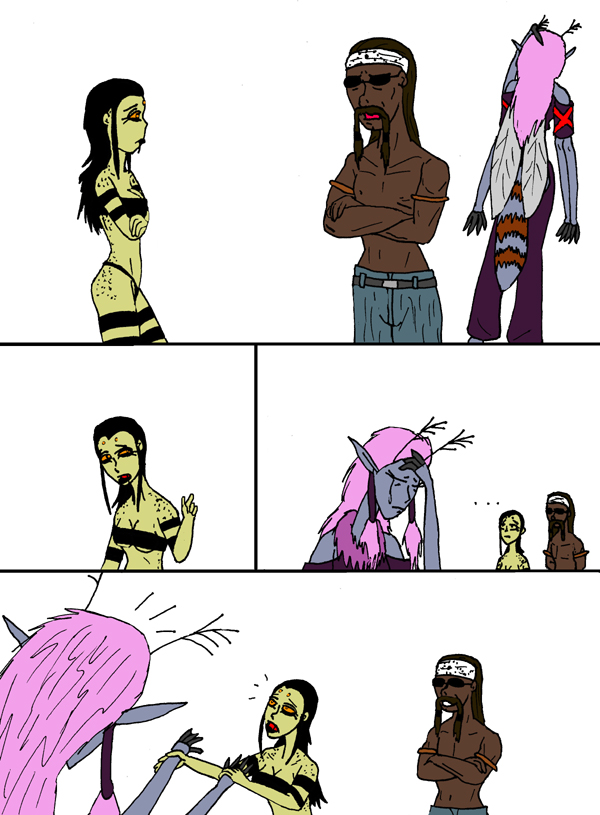 She regaled them over the course of an hour, about her more recent adventures, beginning with meeting Karolina in Adelaide. Events were largely as they happened, although she glossed over certain more intimate details. In the end, the tactic seemed to work. Both Tulsan and Astrile seemed more relaxed around the storyteller, offering her at least a basic level of social trust.

"Quite the dog's breakfast of an account there, hon. It's almost hard to believe you're even alive," observed Tulsan. "So... do you think your mates are dead or...?"

Bali frowned uneasily. "I... I don't know. For the record, I don't know if I would consider Saiya a friend yet, but I want to believe they're both okay. All I know is they're not here. Ultimately, I need to get back across the water as soon as I have the strength and the storm dies down. There's more than one place they could have ended up. I also have a time sensitive obligation to complete, albeit without Saiya's trinket. I think... there's a possibility that at least Karolina looked for me, if she made it. She might have also made her way to the Longtooth's territory, or at least tried, in order to save Siouxsie. Agh... it's all such a mess right now."

"Well... I wouldn't recommend swimming the span across, shiela," said Tulsan. "Don't know how familiar you are with the oceans these days, but they're not safe for anyone."

"Eh. Nothing is safe," observed Bali rather casually. "Besides, I've swum in the sea before, even long distance."

Tulsan shook his head. "Bali, you really have no idea. Just... trust me on that. Stay out of the salt, aye? Maybe you got lucky in the past, but nothing is worth the risk."

"What else am I going to do, Tulsan?"

Suddenly, Astrile stood up and faced away from them, as if needing immediate privacy.

"Huh? Something I said?" Bali whispered to Tulsan, after a moment of wondering what just happened.

"It's not like that... hang on," said Tulsan, walking over to the Bloodflower. "Astrile? Are you alright?"

"You know the answer to that," the mosquito woman said grimly, holding her forehead and mid-section with her twinned set of arms. "Just a bit of pain, nothing serious..."

Tulsan shook his head and sighed. He patted her on the wings of her back. "Of course." He then returned to a confused Bali.

"I should make mention that, eh, she's not doing so well, shiela. In fact... well, not to be bleak, but she's dying. She's actually staying here with me for company. She doesn't want to be alone when it happens."

"Wait... what?" asked a now startled Bali. She had no idea. Astrile showed no obvious injuries. As a Xibalban, it was almost impossible to die a lingering death due to the Law of Shadows stating one's will to survive could give them a chance to overcome most any injury. There were exceptions, but that was generally how it worked.

Hearing Astrile stifle a small cry to herself, Bali focused on Tulsan. "What happened?"

Leaning back in his chair, he sighed. "Something strange... she fed on something she claims was a living geist. Or at least, it looked alive. She didn't notice until it was too late."

"A... a living geist?" Bali repeated, incredulously. Was that different from a zombie like Siouxsie? She never heard of such a description. And geists were easy to pick out in most cases- they were scarcely more than a jet black humanoid form with teeth and white eyes.

"She said it was something she had never seen before. Rightly, I don't know what it was either, shiela. Point is, she's got shadow poisoning. And she's going to turn into one of those bloody shadow people at this rate. I'd love to do something for her, but I don't know how to stop an infection like that. She's been getting painful cold spells in her head and belly- she's not even eating anymore. Blimey, I've even offered."

Bali was quietly horrified, her eyes searching. Shadow poisoning was frequently a death sentence, and no amount of will power would end it, typically. It was most commonly inflicted upon the living by the touch of actual shadow people; they were phantom-like entities that wandered in the depths and lonely places of the world, but they were mainly avoidant of the living. Geists could potentially cause it through wounds, too. But to feed on a living version of one of those creatures? How could that even exist?

Yet not all was lost. Bali took a moment to reach inside herself, steeling her nerves. Although she played it nonchalantly when she first spoke to Karolina back in Adelaide, the shadow beings of the world concerned her and she was no stranger to their unique properties. Long ago, she had several serious run-ins with the deepest of shadows that haunted Xibalba. And as a result, she would take what she heard very seriously.

Approaching Astrile, she took two of her clawed hands into her own sandy colored palms. With an earnest look, she gazed up at the much taller Bloodflower.

"If you give me a chance and can hold it off a little longer, I will do everything I can to save you."

Astrile searched Bali's orange eyes. But there was no treachery, no trick, no lie being told. The Death Clan seemed utterly sincere and full of conviction.

"I don't understand..." Astrile said cautiously. "But I feel you're telling the truth. If you know some cure, please... tell me. I don't want to die like this. I don't... I don't want to become one of those mindless things."

"Help me help you," stated Bali, her gaze probing with possibilities as she spoke. "Do you have the strength to lift me into the air for a distance? I need to get back to the mainland. I'll have a better chance to help you if Karolina is still around."

Astrile was immediately suspicious. "What? Your witch friend? I know what I just said, but that sounds more self serving... as if you want me to take you back home and then you'll leave me to die."

"No, no, no... I'm being serious. She has some kind of magic that can disrupt geists at their core. If she's around, I could strongly use her help. I need you to trust me. I have a way to potentially beat back the shadow poisoning, but it's not easy. Karolina could be the difference between the chance of saving you to a near guarantee."

He shared a rare smile as she knew of him, as he was trying to be encouraging. "What's the real harm? If she can, then go for it. It's better than anything I can offer."

Troubled, but wanting to believe, Astrile made one request. "Would you accompany me? Just in case? I know I can't carry both of you, but..."

Tulsan nodded modestly. "I've housed you this far, Astri. What's a little longer, right? The world could use some hope. If that's what you want... sure. I'll try to catch up later with my boat."

Astrile turned to Bali, trying to put her faith in a natural enemy of her clan. "Alright... one more journey before the darkness claims me then. And if we can't find Karolina?"

"Then I'll attempt it alone," said Bali with a smile of modest confidence. "I'll do everything I can to stop it."

The mosquito woman nodded. "Then let's not delay any more than necessary. The minute this storm clears, we're going. I may have a few days left in me at best."

Seems as if in this world, peril and compassion can come from the most unexpected places.