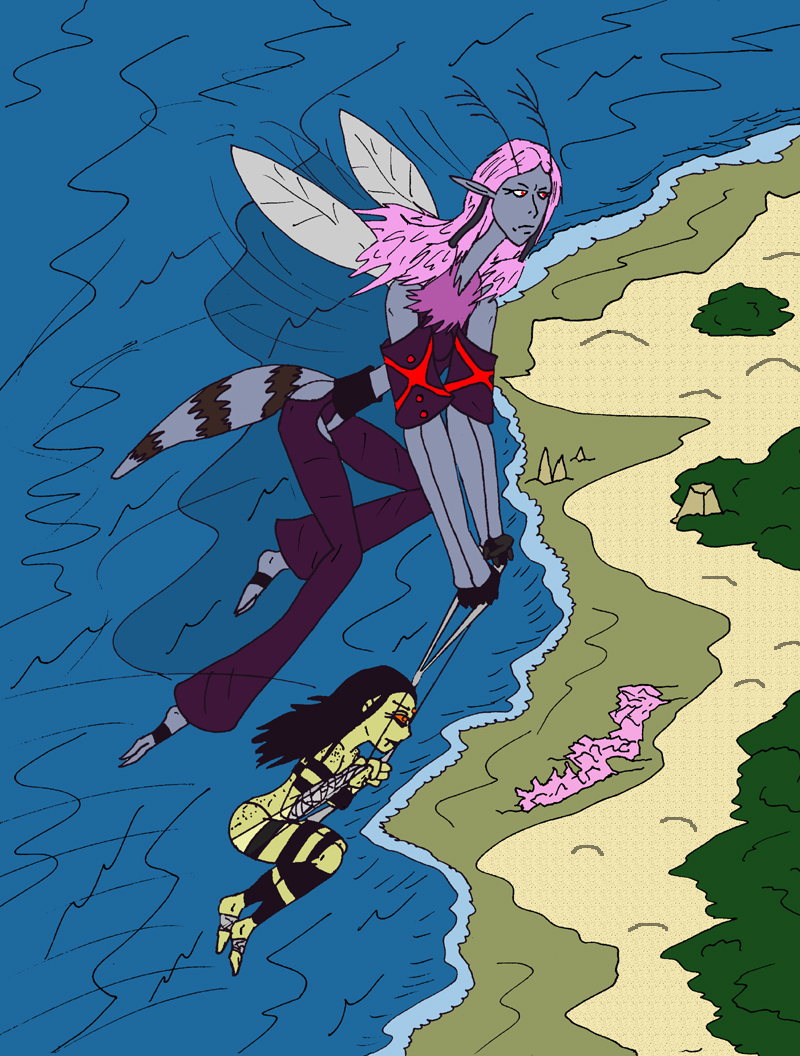 Taking time to recover from her fatigue on the beach, Bali slumped down into a sitting position as things died down. Resting her head between her knees and folding her arms over her brow, she drifted into a semi-conscious state as the rain outside began again. Astrile soon laid herself down on a nearby mat and turned away. Bali didn't need to look at her to know she still didn't fully trust the spider woman. It was to be expected, but she was a bit sad for it all the same. For ultimately, she meant what she said and had no intention of harming or exploiting the Bloodflower woman for several reasons. Not only was she a guest in someone else's home, but she was desperately ill and had done Bali no wrongs worth righting.

Tulsan had been something of an inanimate object on his chair for most of the time she had been here. Perhaps he dozed off quietly behind his sunglasses. She wondered what his story was... a human living out here on a barren island in the middle of nowhere? And how did he get all the supplies for this hut? On a smaller note, she thought he was rather handsome, but neither the atmosphere or the time was there to express it. With humans, it was best to wait and watch how they reacted. Some of them really did not like Xibalbans at all. The fact he housed a dying mosquito-like woman said otherwise, but his story was the only one not shared in her presence.

Bali's mind stayed within the shallow states of dreaming, not drifting off too hard as she kept her ears and those sensory nodes on her forehead aware. She was often plagued with bad dreams and she felt that the day's events would have led to more. Karolina and Saiya were either missing or drowned, which was a horrible thought. Siouxsie still needed rescuing or she was as good as compost to the Longtooth. Astrile, her only ride back to the mainland was dying of shadow poisoning, a horrible way to die. And as for what did it... a living geist? Bali prayed the description was a mistake or hyperbole. It reminded her of some of her worst dreams. And though she didn't want to state it outright earlier when Karolina was around, but the geists in general bothered her on a subconscious level, but she wasn't sure why exactly. It took a good amount of her cheer and good nature not to let onto the fact when they first met in Adelaide.

At some point, she heard Tulsan get up creakily from his seat, and calmly walk outside, where he shared a cough with the rain outside. She could vaguely sense him standing on the sand beyond his hut, probably facing away from it, or so her forehead nodes suggested from his footsteps.

Who was he? He seemed to be of aboriginal descent, at least partly, and his home suggested he might have been a self sufficient hunter, but that was it. He was aware of Argilla, but maybe he had the sense to know how to avoid her? How was he surviving here alone like this with a dangerous unstable Xibalban nearby like her? And where was this boat he spoke about? Unless it was buried somewhere, she felt pretty certain she would have come across it while exploring the little island.

She considered for a moment getting up and having a chat with him, but her bones pleaded that she stay in place, warm and dry. She also thought it might have come across as insincere to ask for help and then fritter away the time before leaving with Astrile to have a random conversation with him. So, she remained, half awake as she stayed in the confused shallows of consciousness between lucidity and sleep.

Later that day, everyone was up and about, as the rain had stopped.

The Bloodflower looked at Bali, this time more neutrally than suspicious. "Are you ready to do this? We seem to have a pocket of serenity between storms again," Astrile said.

"Certainly," Bali nodded with a smile. She was fixing her arm wraps with new webbing, as well as upon the arches of her feet, as she had when she met Karolina. She had been running around without them for a little while now and it made her feel more naked than not. "Since I imagine I won't be riding you, of course, I've come up with an idea." She presented Astrile with a silken sash of sorts, although the creation was lost on her.

"In essence, just a little seat. It should be easy for you to grab. Don't worry, I don't weigh a great deal."

Astrile soon pieced together the idea. Using her clawed hands, she grabbed the sash underneath her in four places, as her many arms would allow, and Bali sat upon it like a child's swing. "Ahh... I see now. If you're comfortable with this, then let's go. I assume you can guide me where we need to go?"

Bali searched within herself and found her Blood Sensing had returned. She could picture a fragmented map of distinct places she visited. With this image in her mind, she seemed to be a small distance off shore from the mainland, but enough where it would have been an effort to swim. "Absolutely. Ready when you are."

Tulsan watched from behind as he observed Astrile airlift Bali above the salty water, going higher and higher, until they reached the rough height of coastal birds. Then they embarked towards the mainland proper. He scratched his chin and went to gather his things he would need for this trip. His way of following them was going to be very different from anything Bali, let alone most Xibalbans, could attempt.

High above, Bali wafted below and a bit behind Astrile, who seemed absolutely huge in height now that she stood up straight in flight. Bali smiled, rocking in her silken chair from the elevated winds, as she was carted over the churning waters. Astrile wasn't particularly fast in flying, but she was steady and seemed to have some way of determining oncoming gusts and breezes before they hit. No doubt it was a talent of many fliers.

"How are you holding up?" Bali asked aloud, her voice needing to carry a bit against the background wooshes and gouts of oceanic wind. "Not too heavy?"

"I'm fine," Astrile said plainly. "If you're too difficult for my arms to carry, I'll just dump you in the drink below."

Was that humor? They were up some two thousand feet. All the scenery looked like a child's idea of the world made with colorful clay.

"So, where first?" the Bloodflower asked.

"Let's scan the beach. If she washed up there, I should see her," said Bali.

"We'll head island to the swamps of the Longtooths. She might be somewhere along there, too."

Bali interrupted, knowing what was going to be asked. "I'll try to help you, if she's not. I gave my word. I won't make you go into Longtooth territory."

Astrile was quiet for a moment. "You would go there alone? To help a zombie?"

Bali nodded begrudgingly. "They're all part of my pack, Astrile. I'm their Alpha and their friend. I'll do what I can. My word has to mean something when I give it."

Two thousand feet?!? Wow. Astrile has a lot of flying strength. Why so high, especially with a passenger? Is she that afraid of some sort of ground threat?

All of her kind are quite capable of lifting a fairly light weight Xibalban like Bali off the ground, they're just not quick about it. Imagine a truck built for torque so it can ascend hills with a load, but its top speed is fairly poor.

That said, that size and slow flight coupled with generally undefended bodies makes them punching bags for the more hostile ground based barbarians, so they adapted to flying higher than most can reach. What few other flying Xibalbans there are, generally don't have a ton of reason to go that high, so it becomes their niche. Bloodflowers want to avoid trouble because they're bad in dangerous encounters, yet their feeding requirements demand they single out someone. So, using a wide ranging view from above to find a choice target, they have to sluggishly ambush, grab someone, and lift them off. This is usually made with the promise of returning someone below safely for their cooperation while feeding on them, at least if the prey is dangerous. And because they can perceive oncoming most gusts and breezes, they can usually navigate competently that high up.

So in short, yes, she has reasons to fear attack from below. She's not fast enough, strong enough, or skillful enough to fight off ground based dangers. And she's a very big target. Also, you might have been able to tell, but she still doesn't trust Bali anymore than she has to yet. Aside for protection from below, she knows Bali wouldn't dare attack her this high up since falling would not be the Death Clan's best idea.

Real mosquitoes may be a hassle for us, but their Xibalban counterparts have a whole different set of problems set against them. Not everyone can be truly brutal or equally matched in Xibalba.