57. Where the Whole Mess Started 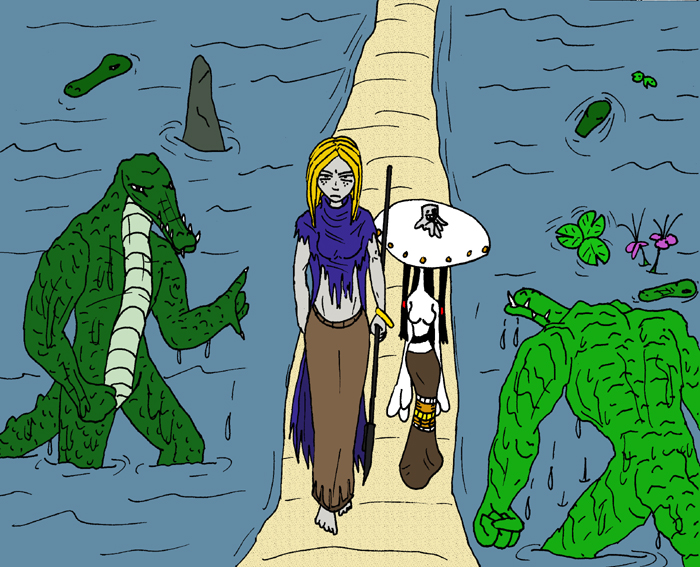 Elsewhere, Karolina followed the trail left to her through blood sensing to find the Longtooth's territory again. Rottkap was quietly following in tow, with Tom Thumb riding upon her disc-like mushroom head. They were well behaved companions as things went, sharing only meaningless pleasantries along the way. She was particularly surprised with Tom in particular, as she imagined he would have been more grating as Brand had occasionally been.

But her focus was hardly on them. Rottkap had her own business in these lands, and she hers. Part of her felt elated as she came upon the lands of Siouxsie's captors, for she navigated in a foreign land successfully on her own without Bali leading her. But if not for these damned alligator people... Karolina felt the black bead necklace under the cowl Brand gave her.

Journeying through swampy land until she reached water on two sides flanking a sandy land bridge into the heart of the Longtooth's outpost, she saw several rising from the water lazily, only watching her this time. How many had she passed already that she failed to notice? No doubt, they knew of her arrival befor she was aware of them.

As she made her way inward, she felt a growing sense of disgust. Why, she asked of herself. Why couldn't they have left her, Bali, and Siouxsie alone? If Bali was as dead as she imagined... this had almost entirely been all for naught. Of course, if she had not raised Siouxsie from the dead, then none of this would be happening either. This whole misadventure seemed to be one long chain reaction of an error she created.

However, instead of feeling self loathing or lament, she felt increasingly hostile towards these Xibalbans. They were no threat to them! Bali's apparent demise again reminded her of the misfortune arising from this place. Her self loathing became disdain for these reptiles instead. Maybe it was the awakening by Rottkap that made her feel that way, she wasn't sure. But she felt much less intimidated by them now, somehow.

Before long, a Longtooth stood before her on the path, motioning that she stop. She glared up at him, breathing slowly out of her nose in irritation.

"You're pretty bold to just saunter in here so casually. I know you made a deal with the old shaman Rathalos... clemency for proof of the spy's death, I believe. So, where is it?" he grunted, gurgling.

Karolina grimaced further. Who the hell was this guy? Where was Rathalos? "My deal isn't with you," she said tersely. "Where is Rathalos?"

Rottkap and Tom seemed invisible to the Longtooth. They looked uneasily towards Karolina, who seemed to be struggling with something.

The witch looked down at Saiya's torq on her wrist. To think, everything they had gone through, just to tell a more convincing lie with this scrap of metal. Planting her shovel head first into the soft earth, she went to remove the bangle. However, Karolina paused mid-way.