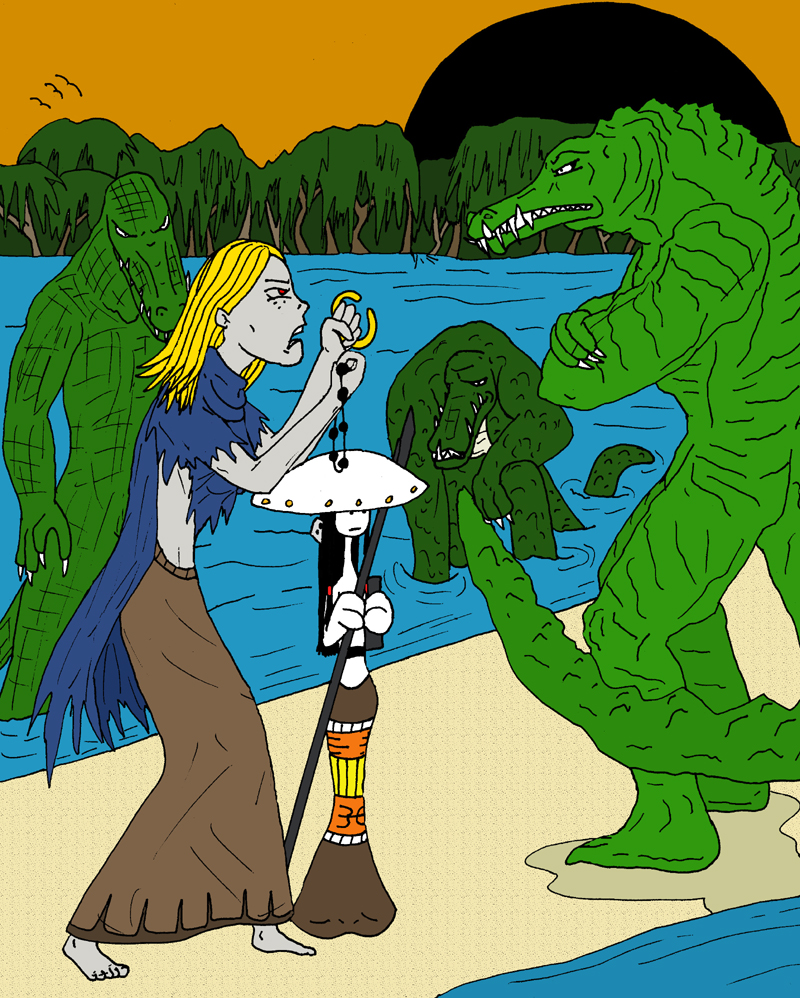 As various other Longtooths near the watery land bridge came to investigate the disturbance, Karolina paid them little heed, instead shoving Saiya's gold torq and Bali's black bead necklace at the reptilian guard. "THIS IS MY PROOF, you prick. I have the stupid bangle the old man wanted. My friend Bali paid the price for getting this god damned thing back. This was her necklace. Now... are we done here? I just want to finish my business and leave. We never wanted anything to do with you in the first place." Rottkap held her book and shovel momentarily, as the witch nearly knocked over the latter.

The Longtooth groaned pissily at her tone, staring her down, but she wouldn't look away. Another yet spoke up. "That's right. She had a Death Clan woman with her before. Now, there's just this little mushroom toothpick." Tom Thumb had since hidden himself in Rottkap's lengthy black hair when he noticed more were gathering. The lead gator man had been focused solely on Karolina the whole time, so he didn't give Rottkap any thought until now.

"Fine. And what of this one?" he said, boredly acknowledging Rottkap. "A replacement for the spider? Trying to start your own little clan, human? Weak creatures band together with irregulars from other groups, I've heard."

Karolina trembled, her eyes reddening with her new born inner fury, but she bit her bottom lip, as she slipped Bali's necklace back on under her cowl. "Grr..."

Rottkap spoke for herself. "We have no such alliance, sir. I am called Rottkap, and I'm here only behalf of updated territory changes, as per my duties under the Mushroom Queen. I am to report to whomever is in charge of this tribe." She kept her profile low, despite the importance of her claim.

Karolina noticed a small anxious twinge in the Longtooth's demeanor, if just briefly. When she mentioned 'territory', he seemed anxious and suddenly uncomfortable. "It is... good news, yes?" he groaned throatily back.

"There has definitely been a change in your favor. Miss Karolina has been responsible for leading me here, nothing more. Our meeting together was chance and our missions are not the same."

"Oh... er, well fine," the gator acknowledged, still uneasy. Karolina could tell something odd was going on, if just by how Rottkap stated her business. It sounded silver tongued enough to slip past an arrogant guard's ear, after all. What was she up to?

"Take this stripling witch to see the old shaman and... the other one. Envoy of Zanza-Anzulu, please come with me. I'll take you to our chieftain."

Karolina took back her things and the two separated. Several Longtooths escorted her down the land bridge while the main speaker shot her an evil glance before leading Rottkap away. The mushroom didn't turn to look back at Karolina, as if there were no importance between the two. Perhaps that was true. But the shovel witch managed to spy on Tom Thumb peeking out of her hair, giving her a quick wink, before ducking back in.

Karolina was now alone among her enemies. Despite fulfilling Rathalos' request on time, she could sense that something was wrong. But what it was, wasn't known to her. She gripped the shovel's haft tightly as she often did in times of concern. There was no outside help now, no words of encouragement from Bali, and no back up plan. It was time to end this damnable misadventure and all the high prices she paid, as well as those still pending.

Apologies for the lateness on this one, I've been sick all week. And thank you to whomever's been upvoting the comic recently, it's appreciated.