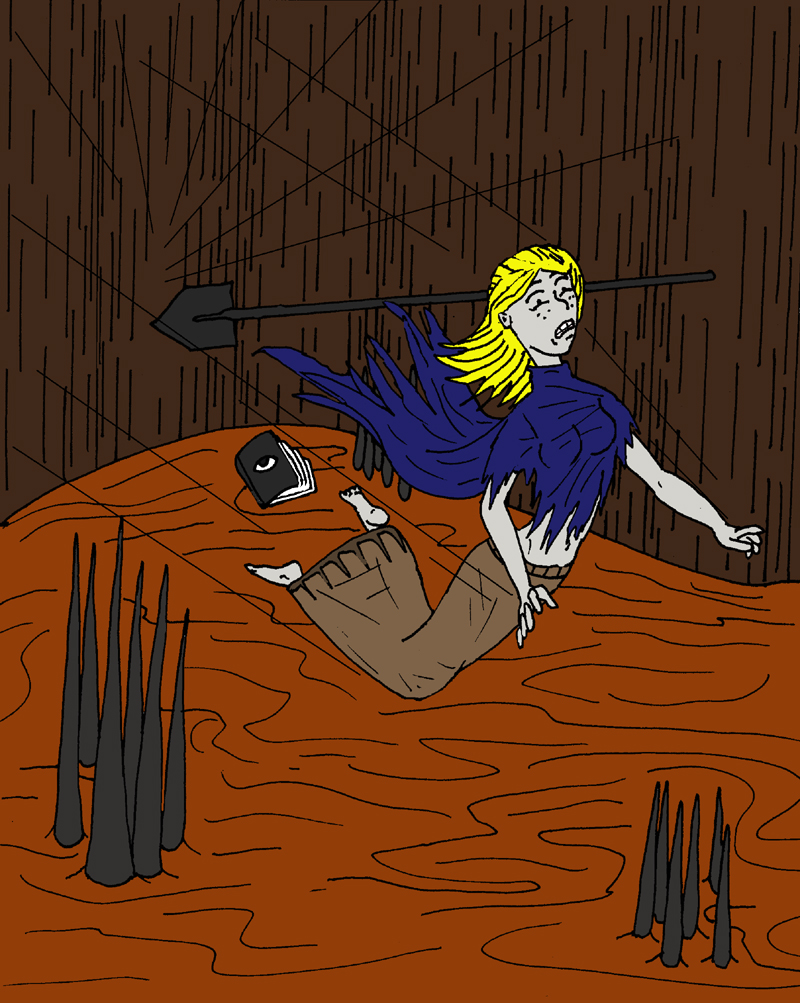 Once again entering prime Longtooth territory, Karolina found herself looking upon large ponds and saturated wetlands in nearly all directions. There were a few standing huts, but no shortage of burrows. She wasn't familiar with this part, having once entered from the opposite direction when this all began, but it wasn't entirely foreign either. A dank odor entered her nostrils, very different from the red peppery grasses she arrived from. Ahead of her, Rottkap and Tom were taken in one direction, while Karolina was escorted in another.

She wondered what she was going to say to Rathalos. She had no bond with him, at least barely more than anyone else here. She wanted to snap at him, but then again, he was the only one willing to cut them any sort of deal. But at what cost? It didn't feel right that Bali wasn't here. And while she had no exact proof, she was leaning towards the idea that the poor spider woman drowned during that blurry moment between the underwater geyser and Karolina awakening alone on the beach. After all, the signage indicated that Saiya had no idea where Bali was, and she was a scout.

The moment of reflection was interrupted by the brusque Longtooth guard, who put his large scaly hand on her left wrist suddenly and yanked off the gold torq. "Hey!" Karolina protested, rubbing her wrist. "What's your problem?"

"I wanted to see it," he said plainly, unconcerned with his rudeness. "Hmph. So, you really killed the Ophidian woman? Is that what I'm to understand? Or more realistically, was it the Death Clan leading you by the nose, who did it? I somehow doubt you had the base prowess to kill a barbarian, witch."

He was really getting on her nerves. Why was he so mouthy and abrasive to her? The other Longtooths seemed less provocative, comparatively. "And what's it to you? She's dead," said Karolina with a sneer, holding up the lie effectively. "You got what you wanted."

He looked at the torq and then her, with a glance of smug bemusement. "See, that's the thing. I'm not convinced a skinny armed weakling like you did jack. You were probably just brought along for whatever gross interest the Death Clan wench had in you, and like a good little puppet, you walked the rest of the way here once all the heavy work was done. Huh. You want to know what my problem is? You, human. I have no patience for your kind. You should have been eaten the moment we saw you. You're a dying remnant who can't do the slightest thing on your own, like the rest of your dwindling lot. Oh... but wait, maybe you were going to join the Death Clan, hm? Was that it? You were going to be recruited? Perhaps, elevate yourself to something more worthy than you are?"

Gnashing her teeth, she shook her head. "Bali was my friend and I don't need to explain anything to a walking talking handbag. My business, that torq, and everything else has to do with Rathalos, not whoever you are. Don't like humans? I don't care! And, I'm not going to care. Now lead on or piss off already. You're wasting my time."

"Heh, feisty. I guess you found your spine since my tribe and I caught you lurking in our territory. I remember that gormless scared expression on your face. Oh yes, I was there. It was a treat to see a human looking stupid out of her natural environment. But you know, it's somehow even better now."

With that, the Longtooth swiftly turned her around by the shoulder and before she knew what was happening, he kicked her hard in the back, causing her to fall into a muddy spike strewn pit filled with mud, encircled with tall standing logs. Karolina grunted, having no time to react and was cast forth.

"You'll find everything you're looking for in there, witch. Oh yes. And we'll see just what a bad ass you want to pretend you are. Nothing in there that an Ophidian slayer need worry about, anyway! Ha ha ha!" Such were the words that followed before she landed in the wet muck of a pit some twenty feet down. Just narrowly had she avoided a random cluster of spikes which would have surely impaled her.

A golden ring of some size soon landed nearby. It was the torq. "Go on. Take it to him, girl," the bullying Longtooth mocked. "He's not far now."

Let's face it, was she going to get a gentle reception from a bunch of alligator men? They probably had to restrain themselves from biting her head off.

Maybe it was naive of her, but she expected they would have fulfilled the arrangement they had. In her mind, she couldn't do nothing after all they had been through. Perhaps if Bali had been around, they might have honored it, but this is more about at least one Longtooth's disdain for humanity than anything else.