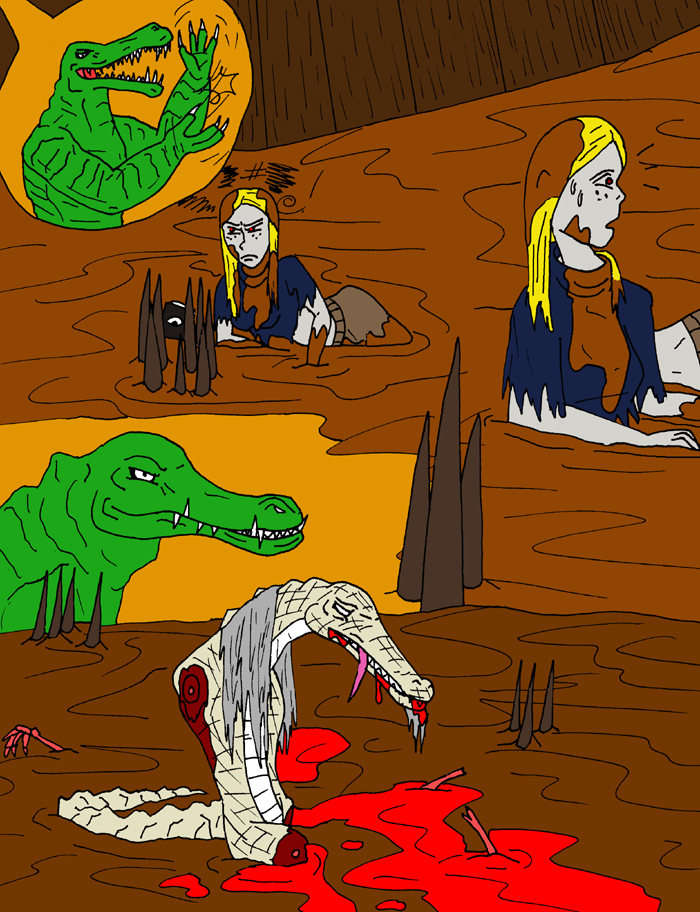 Karolina landed awkwardly in the muddy pit, splashing the wet earth everywhere, despite only being a few inches deep. It cushioned her fall, but it was an uncomfortable feeling of heavy and saturated, like thick lamp oil mixed into too many layers of cotton. The unpleasant sensation was a slap in the face, to say nothing of the indignity. Karolina's eyes grew a red glow once more from agitation.

Above, past the wall of logs surrounding the large pit, she heard the Longtooth laugh, clap, and guffaw hoarsely. "You're a spectacular diver if anything, human. I could do that all day!" Karolina howled a diatribe of obscenities at him, slowly picking herself up.

However, before focusing entirely on the antagonistic Longtooth, she sensed she wasn't alone down here. In fact, someone else sat nearby. She turned on that instinct, expecting to see some aggressor waiting for her. Instead, it was a sight that set her blood as cold as her host. It was Rathalos. By every look, despite the slow motion of his chest rising and falling, he should have been dead.

Not far sat the old man in the creme-toned crocodilian's body. Only, he looked listlessly to the muddy ground, his tongue hanging out the side of his long jaws like some beaten dog, and blood seeping out of his mouth. His arms were entirely removed as well as his legs, although one remained a vague stump of a thigh, indicating they were detached less than delicately. They exposed, open and bleeding literal pools atop the muddy earth of the pit. Close by, there were pink stained stalks of fleshless bones. One was a femur, while another was a wrist with skeletal fingers. Karolina had no doubt. They were his. He sat there, amputated cruelly of all limbs, except for his tail. He remained wheezing, staring blankly at the ground, seemingly processing nothing of his guest.

"Oh dear god... what... happened...? Old man?" Karolina spoke, disquieted. Rathalos, who sent her on this quest in the first place, had nothing to share or no ability to relate it. By all accounts, it was a tribute to how stubbornly Xibalbans could cling to life, for any normal man would have bled to death several pints ago. But for that survival, it must have been a torture like few others to experience.

"Ahh, I see you've noticed the old codger there," said the obnoxious Longtooth from above. "Aren't you glad to see him? You can give him that little bauble now, I'm sure he can still use it."

"What the f... what did you do to him??!" Karolina screamed back, a mix of shocked, terrified, and disgusted.

"Me? I only made him what he was in his heart. A worthless Ophidian lover. Figures, really. Humans have such weak minds. Rathalos or... Richard, as his man name went, was a sympathizer with the Ophidians. He wrote his own eulogy when he sent you and the Death Clan barbarian to go 'assassinate' that Ophidian we knew was scouting about. I wonder... what are the chances that that torq was easier to get than the Ophidian's life, hm? True, I don't know if you did the deed or not, but it doesn't matter. The Longtooths cannot abide sympathizers of the snake spawn, especially in our own ranks. Rathalos was never a good fit to begin with. So... we made him into an Ophidian. A snake has no legs or arms, you see. And that tail makes his body continuous, like that of a snake. We improved him, I think. He was never a Xibalban pure blood, so why let him pretend to continue being one of us?"

"I am no monster, witch. My name is Lockjaw- I'm an inquisitor of my people. Disloyalty and corruption cannot be tolerated. Weakness, cannot be tolerated. Rathalos is more human or more Ophidian than he is a Longtooth- we merely managed to get proof of it when he offered you that flexible arrangement. Rightly, you should have been eaten or made to work, nothing else."

Karolina trembled with rage, but it was tempered by her feeling for Rathalos. She didn't naturally like him much, but this was beyond the ken of disliking someone. This was monstrous behavior, cruel and sick maiming. She felt terrible for him now, pitying him for what he must have experienced in a betrayal by his people. Given the fleshless nature of the bone pieces sticking out of the mud, they likely ripped pieces off of him with their large sharp jaws and picked at his limbs like vultures. However naive of the world, she couldn't believe anyone could be this vile and horrible.

"And to think, I suspect you had more than a hand in his inquisition than you realize," Lockjaw smirked.

Karolina bent over Rathalos, wanting to comfort him, but she didn't know what to do. There was no way to apply first aid here and his wounds were nothing short of extreme. By all accounts, he should have been dead. Realizing he was likely dying and only hanging on by a thread due to his Xibalban fortitude, she didn't immediately recognize Lockjaw's taunt. But when it hit...