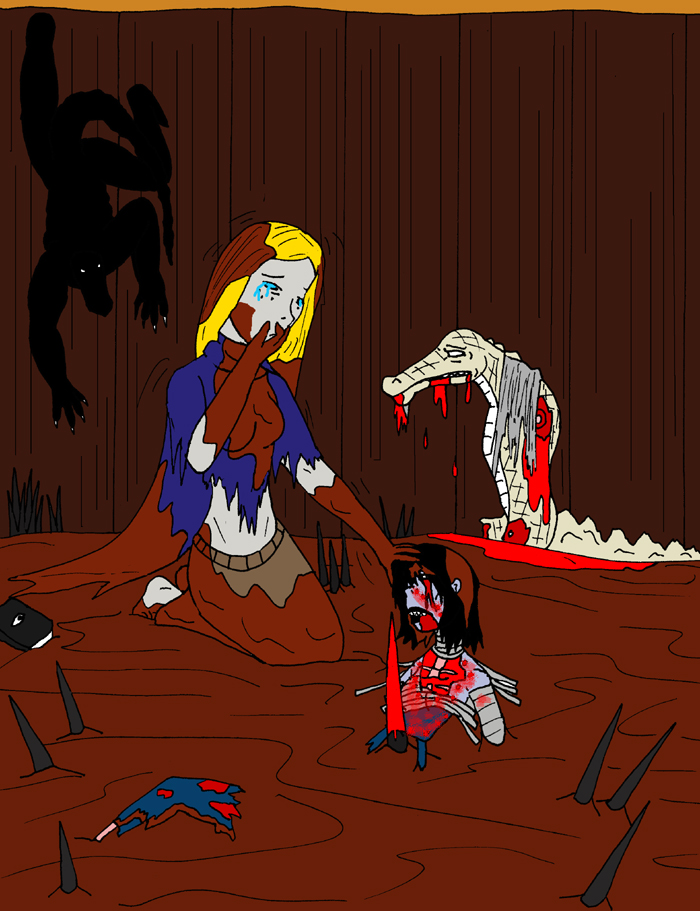 Lockjaw said nothing, but the implication dawned on her, for nearby, she spotted a single disembodied piece of a leg. And it was not that of Rathalos, but something smaller and with the scrap of what were once a workman's overalls on it.

Numbly, she stumbled closer to the sight and found what little else remained. There was not much left of Siouxsie Q, the trusting zombie she raised. Just the head, upper torso, and shreds of fabric. From her chest to her face, she had been bitten several times by large snapping jaws and literally ripped apart into a tragic mess of once animated flesh, blood, and mud. Karolina cradled the side of Siouxsie's short dark hair as the zombie stared in final death, her expression wracked with pain before leaving the world again. There was no doubt that she suffered. Outside of hunger, Karolina didn't know she could even experience that sensation. It seemed closer to life than undeath.

Or maybe it was despair. Alone, confused, and without her friends...

Karolina felt deeply disturbed and sickened. She had been given a second chance to make things right with Siouxsie, thanks to Bali's intervention, only to have it stolen away. Siouxsie was practically a child in mindset, both innocent and unaware. To even consider this about her made Karolina recall how callous she had been to the zombie before Bali convinced her otherwise about the poor thing.

Was this for the best? She was a zombie, when she was intended to have been alive. But thanks to clumsy spell casting and poor understanding of the magic ritual involved, Siouxsie turned out like she did. But what poor creature must die twice? Could things have been different for Siouxsie in the long run, had she been allowed to live again? What would she learn? Could she grow as a person? Unlike a regular zombie of lore, Siouxsie could talk. Now, it seemed there was no way to know.

"Spiritual filth..." hissed Lockjaw, climbing down the log walls like some oversized gecko. "You raised the dead into a mockery, in a world already infested with geists. You're no simple mage, you're trash. Bringing something like that into a state of false life- I know it was you, witch. Rathalos was complicit with more than just siding with the Ophidians, he allowed that... thing, in here. He allowed you to live. I don't have words for how perverse and degenerate you are, human. You are everything that is wrong with your kind. But I will make sure none of this goes any further, as one removes the invasive weed to allow the garden to prosper."

"Everything you set out to do, it was only right that your path led you here. The spider wench is dead, it seems. No one will miss an assassin. The traitor Rathalos, left alive only long enough to recognize his own lack of loyalty and the outcome of abusing his position. And of course... there is you; the necromancer."

"You should have died in Adelaide with the rest of the trash, human," he gurgled darkly as he approached with sloggish steps from behind the shovel witch.

Karolina shook, crying to herself, having already left her body. All that remained wanted to die. Everything had been for naught.

Things are certainly looking bad for Karolina. Her world seems to be crumbling like a house of cards in an earthquake.