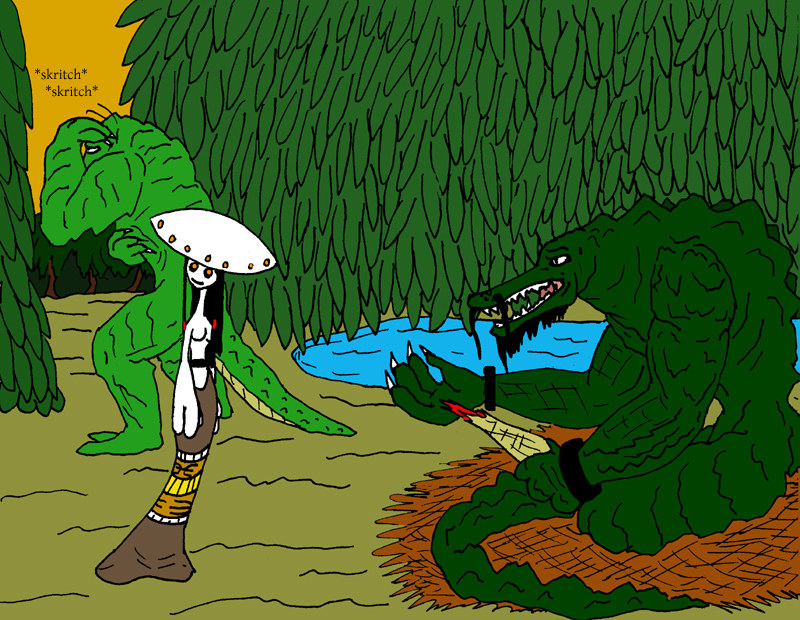 Nearby, Rottkap had been escorted by a single guard to a small private grove surrounded by blanketing walls of 'nemu', a thick frond-like plant that held ancestry with grapes and kelp before the Herald Event warped much of the flora and fauna. Within the boundaries, a small single pond sat fresh and unoccupied. Next to that, one of the larger Longtooths sat, sporting a curious Fu Manchu mustache from his snout and a black jaw length beard. His skin was rough and deep green. On his wrists, thick ebony bracelets. In his hand, a chewed on segment of one of Rathalos' limbs, possibly a bicep. Rottkap had no idea who the disembodied limb piece belonged to, but there was little reason to doubt it was nothing more than a casual snack to him. This didn't particularly faze her- cannibalism was very common amongst Xibalbans, with their system of those lesser and greater within their own tribal hierarchies.

Sauntering closer, the mushroom maiden smiled politely, although her orange eyes, ringed with darkness, were larger than usual. The guard who escorted her left with a wave of the bigger fellow, although the minion found himself strangely itchy.

"You are the chieftain, I presume?" asked Rottkap.

"True enough," moaned the large Longtooth. "Although I prefer king. King Canberra, if you please. To whom do I have the pleasure of speaking to?" Although his body was that of a brute, he had a sense of sophistication that the others lacked, which was impressive given his choice of food for the morning.

"Rottkap. Humble envoy of the Mushroom Queen Zanza-Anzulu. It is good to meet you, King." The maiden made a quick curtsy.

"Likewise. I heard you arrived with a human witch, one from Adelaide," he pointed out. "I trust she gave you no trouble?"

"Her? No. But she was a most helpful guide getting here."

The King tensed. Although he ruled this place, she represented something above and beyond Xibalban society. The mushrooms existed before everyone did. They were neutral, map makers, and keepers of everyone's territory. Queen Zanza-Anzulu was a high spirit to be given respect, regardless of one's tribe, for it was she who would mark veve's upon mushrooms in one's land, which was a clear sign of official territory and power.

"Have I done wrong?" he asked. "My inquisitor planned to send her to the pits. I didn't realize she was integral to your company."

"I did not arrive here to speak of her," said Rottkap with business-like focus, staring at the King in a way that made him uncomfortable. He was sitting, but in stance, he would easily be twice her height.

"Ah. Then what business has the envoy of the mushroom queen to do with me? I hear this may be a matter of territory..."

She stared into him without saying a word for several seconds, making him squirm. Her smile was small and frozen. Combined with her pale fungal flesh, she seemed more like some otherworldly 'thing' than a person. And yet...

"The Queen tells me, King Canberra, that your territory has almost no mushrooms that she has bestowed upon your lands. On my journey here, I do not believe I saw even one. Why is that?"

He swallowed hard, setting down the chunk of Rathalos. He was no longer interested in eating.

"I suppose there is no reason to dance around the topic, envoy Rottkap. I have had them removed. And they will continue to be removed."

"But by removing the mushrooms that bear the veve's of your clan, King, your opponents and neighbors will not know their territory's borders from yours. The invisible division of land will invite them to wander too close by accident. By leaving your land without my lady's fungi, you bait others to your ambushes."

He smiled modestly. "You're not wrong. And I must say, it works well. What better way to assert ourselves and to encroach slowly upon the ebbing fences of our enemies? Such as the Ophidians? They are allowed to be clever and we are considered foolish thugs and brutes. So I make a policy of disguising our borders to bait them closer to our jaws... and this warrants the mushroom queen's attention? What does she care who dies?"

"She does not," Rottkap responded, her face still frozen like some creepy smiling doll, eyes wide and unblinking. "But the pact she has with all Xibalban barbarians is the same. She will measure your strength and mark your lands accurately, and impartially. All she asks is a tiny spot for her growths to flourish, which also feed the wandering creatures of the land-"

"I care for none of these things, envoy. I do not need the mushroom queen's blessing or her veve's."

"Tell your Queen we are not children anymore, envoy," Canberra announced with a casually dismissive gesture of his hand. "We increase our own lands through strength and the abandonment of an old obsolete system. We have no reason to take ease with our ancient enemies, the Ophidians, let alone wandering wastrels like the human and her now sleeping companions. Tell your Queen her billboards are not needed and the Longtooths need neither them nor her. She may watch our growth from afar in whatever distant throne she holds and admire our successes from there without lifting a finger."

Rottkap was without humor. She gazed at the wet ground for a moment and then returned to observing him. "You are breaking the pact we have, King Canberra. Do you truly speak for all your people?"

"I am King, am I not? All will agree with me, save for the condemned shaman this flesh scrap belongs to. All who swim and sun here are my subjects. My will is theirs. Your pact was made by our oldest ancestors. They are long gone and so are the quaint conventions of marking our borders. Let the old pact fill the minds of the true Xibalbans who crawl, fly, and bite... we Longtooths and Ophidians were never truly as they. We just partook of the shared fruit."

"That is... unfortunate, King Canberra," she stated in polite lament.

"You know the Laws of Shadows, King? The gift upon all born in the darkness of Xibalba?"

"Of course. As do we all. They have nothing to do with this."

Rottkap took in a deep breath. "Perhaps your ancestors should have passed on the oldest stories better then. So it goes... It is the will of the Queen that you and yours will be punished for your faithlessness."

Apparently this Croc King doesn't understand a lot of things, including what happens when you mess with the natural balance of things. Arrogance will do that to anyone.

Yep. Apparently he got so fed up with the traditions that he forgot why they were there in the first place. The Longtooths are not necessarily the sharpest tools in the shed. Breaking out of the codified behavior that the various rival tribes have is a big no-no. Then again, he's pointing out that the verminous tribes are the real Xibalbans- in his mind, his people have basically just been observing the rules but they're not like the Death Clan, Bloodflowers, etc. Unfortunately, he's both right and wrong in the end.

So, in a world where everyone hunts everyone, how is there a neutral tribe observing rules for everyone else that no one dares mess with? The King is going to learn this the hard way.