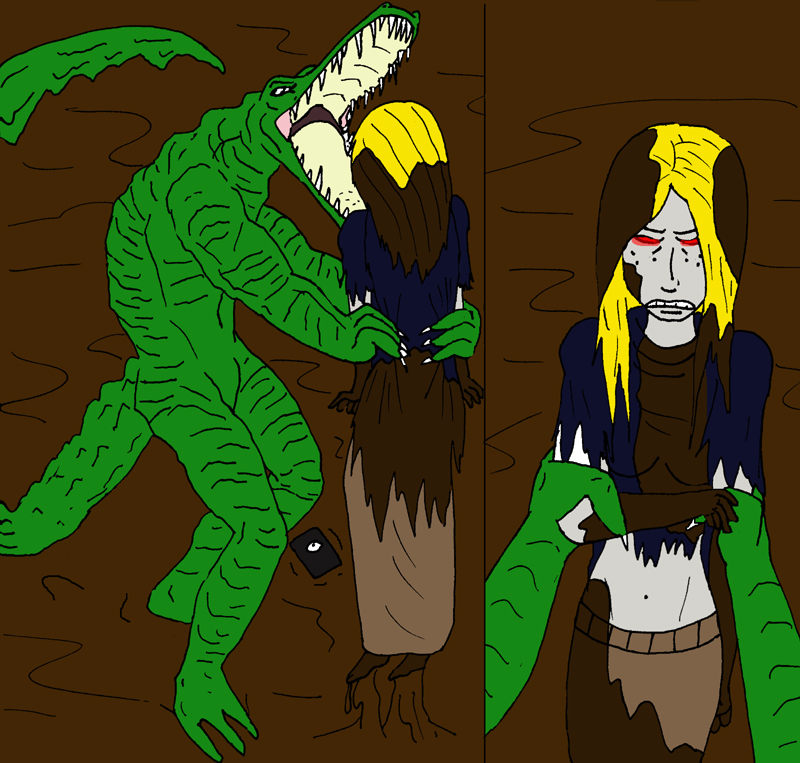 So, that was it, then? She asked herself this much as she kneeled in the mud, lost, defeated, and disheartened. Everyone was gone. She wasn't sure what she was even doing here anymore. There was no one to rescue. Nothing to go back to. Just... nothing.

She could see Lockjaw lumbering towards her, unimpressed and in no hurry. But his intention was clear. Whatever his reasons for hating her or just humanity in general, it didn't matter. Nothing she could say now would convince him otherwise of his course of action. She hardly even knew who this Xibalban was, but perhaps that too was irrelevant. He didn't really know her. She was just a symbol of all the things that sickened him. And to her, he was just some brutish stranger, their individual stories not overlapping beyond his intent to kill her.

"Bali... Siouxsie... Mama... Papa... what was the point of all of this?" she muttered to herself, watching reptilian feet get closer in the muddy slaughter pit.

"Girl..." came a faint wisp of a familiar voice, breaking up her self loathing. She cocked her head slightly. It was... Rathalos?

"This day... is not your sin," he whispered, almost deliriously as he bled out. "Misfortune is a poor reason... to assign blame. I could not stop you from arriving here, but... it was my deceptions to lead you here. I did not intend to speak the truth to him, but even... a shaman cannot override an inquisitor of his people. And I am not innocent. I risked. He suspected. This is the doddering lazy foolishness of the old- that we will always deceive those younger than ourselves... successfully."

"Something you've said that finally smacks of the truth now, eh shaman?" Lockjaw said, pausing temporarily. "I knew your heart was too human. Too flawed to survive. And you would use us for your treacherous machinations. Where have these things gotten you and her, Rathalos?"

The old half dead Longtooth ignored the goon.

"If... if I could give you any final advice, anything to steel your nerves now... I tell you this as a man who has lived long enough. Not as a human. Not as a Longtooth. But as Xibalban as you or anyone else..."

"Be loyal to yourself. It's one of the few things, perhaps... worth dying for. You can still claim that much if you want."

"After all... shovel... witch..." he choked, shivering. His will to live had faded into darkness and despair. He was not strong enough internally or externally to go on. So he left her with his final words, this stranger also soon to die.

She lifted her head and wiped hot tears away. To anyone else, it might've sounded insulting or backhanded. But to one who obsessively worked to bury an entire town, the entire focus of her solitary life prior to meeting Bali, it reminded her that life was counted in seconds. Moments counted. One's conduct, counted. Would she be remembered as a sniveling push over by this self serving thug, if at all? Was the entire point of her to fail now and simply allow himself to be a notch for his idealogy.

No, she had been here too long. If she was going to go, then better to make him question just how 'easy' it would be to kill a human. For Bali's efforts, and for Siouxsie, she had to fight back.

So she focused, feeling a weird hot rage fill her, ironically fueled by futility. It was something she rarely felt. Whereas there was often somber duty, some paranoia, and even anxiety... this was different. It was passion. And anger. Glancing at the cover of her magic book in the mud, she remembered the words of one of her most useless spells in her already scant recollection of magick. And trembling, she muttered those words. Quietly, quickly, again and again.

Lockjaw looked boredly at the now dead Rathalos laying amputated in the mud nearby and shrugged. Turning back to Karolina, he casually picked her up by her arms, pressing them against her sides tightly. Lifting her clean off the ground, he smirked, unimpressed. "What are you mumbling? Some curse, I imagine? Maybe you should have learned something useful, witch."

"Well, it's been fun, but it's time to wipe you from memory now. And funnily enough, I'm famished. As useless as your kind are, at least you taste relatively good." His jaws opened wide, revealing his soft tongue and a great row of curved teeth. "Any last words, witch?"

Glaring deeply, Karolina gnashed her teeth angrily, as rage sparked the deep well of shadow essence within her.

Hey I believe I recognize that spell.
Guesing she summons her spade into a fun and/or painful place in his mouth.
Or just hits him with it.