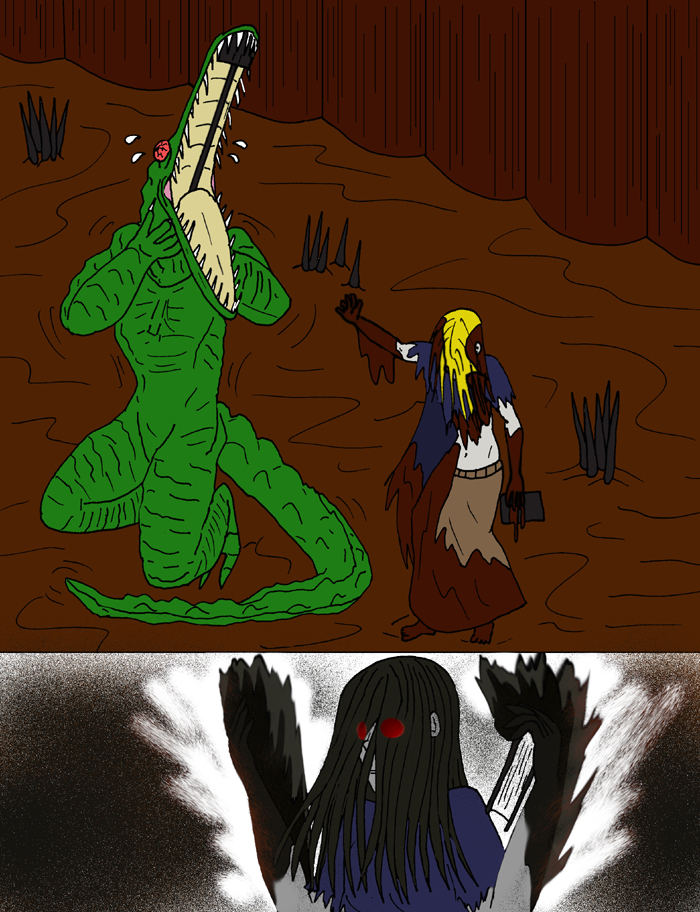 It happened quickly. Lockjaw immediately dropped the girl, his eyes bulging wide and feral from a sudden horrific pain he had never known in his entire life of forty cycles. His screams were a mere hoarse dog-like choking sound, emphasized by trying to get his calloused scaly mitts into his now overstretched jaw. And there, there was a shaft of iron, reaching from the teeth behind his snout to well into the depths of his stomach, forced open beyond reason and wedged in place by either pointed end. The pain was maddening and from out of nowhere, but the source was simple. Karolina simply summoned her shovel point blank, reaching into his maw as he prepared to swallow her. Only by virtue of his jaw being so oversized as the Longtooths typically possessed, did the spell complete. It was a gamble and it paid off. Now, the item was stuck in delicate places where his natural armor was of no use. It interfered with his ability to breath, focus, and do anything else beyond desperately try to unjam the spade from his insides. Unfortunately, he could open his jaw no further and every effort to remove only resulted in agony unlike any he knew. Combined with periodic magical castings that refreshed her one durability spell made the shovel essentially unbreakable, and his problem was not going to be solved by brute force any time soon.

Karolina breathed heavily, feeling heady but also indignant and more than a little angry. They had taken everything. She didn't know what else to do. But as she bowed her head, watching the bits of mud drip off her hair, the feral light in her eyes began to burn hard. It was rage and it had not been quenched. The shovel witch had been pushed too hard for far too long.

Trembling and seething as the screams of Lockjaw serenaded her and as nearby unseen Longtooths began to yell and curse from the reintroduction of once latent diseases to their systems, she felt an icy yet hot darkness flow through her. The mud on her flesh and rainments began to flake off and both her skin and wet hair darkened, becoming grey and charcoal respectively. She found her spellbook in her hand as well, not knowing when she picked it up again.

Angry black spokes of flame began to arise from her arms, burning neither her nor the book. And yet for all of this, it felt somehow familiar. She reacted not with her usual trepidation and anxiety, but breathed in and out, feeling inexplicable cold air in her throat. Amidst the budding anger and her disinterest in question the sudden pale of grey upon her, she thought suddenly of the spells in her book. And what was once complicated to recall, now seemed relatively simple and second nature, as though someone removed a stumbling block from her mind.

She raised her hands, watching them burn with smoky dark flames from elbow to finger. A wild red glow in her eyes peeked from behind now lengthened hair covering her face. She had been dealt enough misfortunes and indignities. Now, it was her turn.

Seems the entire gang finally got sick of being victims. Let's face it, this is only type of message that is truly going to get through to these predators.

If one shows no mercy, don't expect any in return.