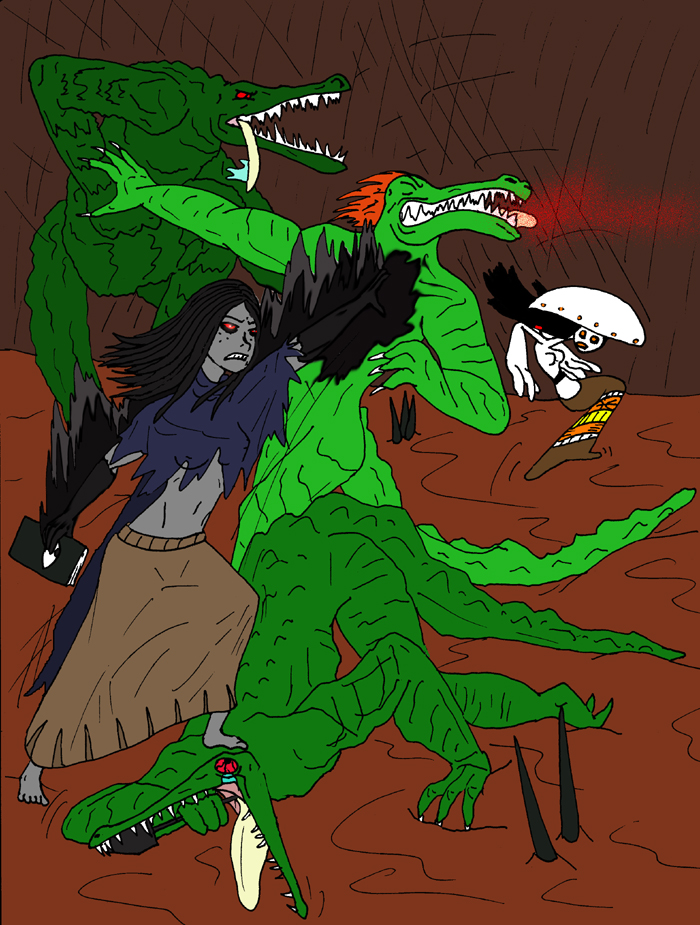 Longtooths began to spill into the muddy arena, apparently incensed by Karolina assaulting their inquisitor. While many Xibalbans would have respected her fighting back, as a lone human versus most any Xibalban was usually slanted hard to the latter, this clan had many issues. A lack of honor and respect was one of them.

For her part, she didn't care. She just wanted to hurt them, release her burdening aggravation, and misery. As they came close, she planted her heel on Lockjaw's throat, who had collapsed and flailed on the ground, struggling to breath. The reptilians approached, but Karolina lashed out an open palm at each, instinctively burning them with the dancing black fire that rode along her arms and hands. Each shrieked and bellowed, leaving them with painful charred burn wounds created only by the shadows themselves.

Magic, used competently, tended to impress Xibalbans, as Bali had once noted. And while the burning darkness Karolina inflicted on the Longtooths didn't lay them out, the painful shock proved hard to guard against, making them stumble and retreat from shock. Others took a little more convincing and soon gripped themselves from strange pains on the wet ground.

Before long, the witch spied upon the little mushroom girl, Rottkap, jumping into the area on her bitty pseudopod feet. "They're real angry! I'm sorry, it's my fault. My goddess was displeased with them and-"

Karolina wasn't fully paying attention. She only saw one Longtooth chase the mushroom maiden and it seemed the rest were quite annoyed with the witch herself. Yet, she lacked nothing for more fire to burn them with. "Bring them to me..." she snarled aloud.

But it was a poor choice of words. The time spent fighting within the mud strewn arena could have been used better for escaping. Hearing the pain growls and groans of Lockjaw's countrymen, the reptiles began to loom and descend en masse. However, they weren't the only ones to drop in unannounced...