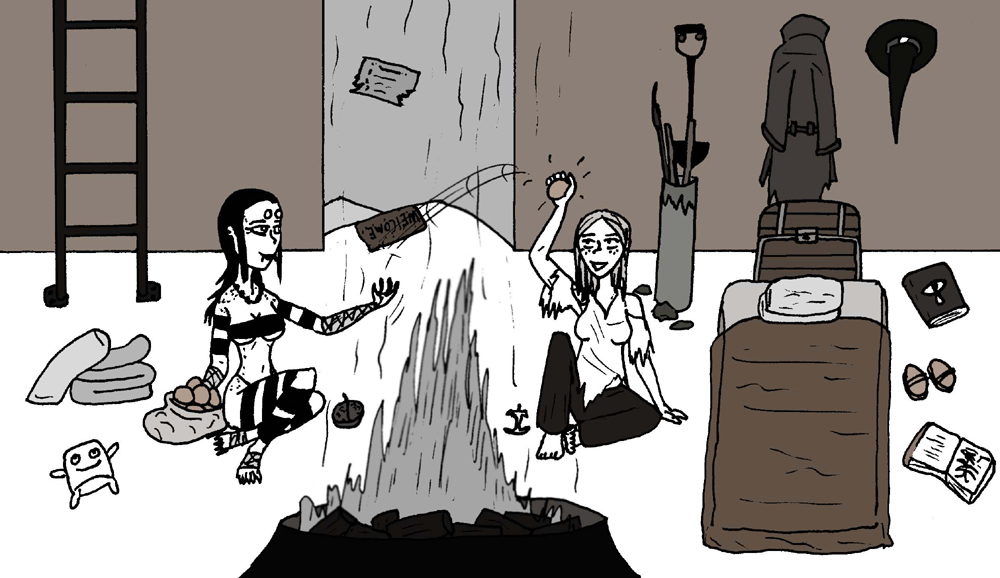 Bali-la ascended several flights of stairs within the oddly nestled light house. There were several landings along the way, but Karolina made little detail of them. When a door was present, she clarified only that it was either a small storage closet or the fixture itself was obsolete, as it covered only a wall now. Strange were the structures of men, Bali-la thought! And in truth, there was little to experience during the journey, only that it was an ongoing series of spiraling stone stairs, maddeningly rising to some top section without any seeming end. But of course, it very did much, regardless of what it felt like.

The top landing was far more open than the rest. The room was smooth and circular, containing most notably an old mattress, a ladder to the roof itself, and a fire pit with a ceiling flue. She was told the pit's light reflected off of mirrors contained above, which allowed the beacon to function as a great torch for the surrounding area. The room was a bit cold and damp feeling, so it was a fortunate thing when Karolina elected to throw some small chopped logs into the pit and activate the roof's beacon. And to the credit of the gravedigger's device, it worked handsomely, providing a pleasant toasty heat in the room.

Before long, the shovel witch soon brought Bali-la some spare blankets and a pillow, as well as a curiously cute stuffed... something. It looked like a rounded white tooth with a happy face. 'Smorey' was the name of the stuffed creature, she was soon told. He was a mischevious marshmallow being and many children's stories were apparently told of him in the waning days of mankind's civilization, from what Bali gathered.

"Do Xibalbans liked stuffed animals and toys, Bali?" Karolina asked, as she removed her brown vest and settled down casually.

Bali looked at the cute imp and grinned with bemusement under her black lips and protruding fangs. "I can't say one way or another, Karolina. But I think he's adorable." She paused. "Is Smorey a he?"

The shovel witch chuckled. "I don't think anyone knows one way or another. But yeah, we all kind of assumed he was. Anyway, I imagine you're far too old to enjoy a doll like that, but I dunno... I figured you might like something to cuddle when you're sleeping. I sometimes find it helps to have something on nights when it might be difficult to sleep."

Bali-la observed the doll and smiled, nodding quietly. She then turned to look back to Karolina and tossed the witch her first apple, while the Xibalban began to pry open a pomegranate. "I appreciate the thought. You imagined I might have trouble sleeping, though? What made you think that?" Her face was full of curiosity.

Karolina blushed and rubbed the back of her neck after taking a bite of the juicy red apple. "Oh, I didn't mean anything by it. I just thought this being an unfamiliar place and all... in a graveyard... I, uh... I don't really know much about Xibalbans, honestly. Just a lot of rumors. I mean, are you used to staying indoors? I got the impression you're outdoorsy. Maybe?" She looked away, feinting a cough awkwardly.

"Ahh, I see. Well, you're not wrong. I'm usually outside, as it were. But I can appreciate the simple comforts that a warm blanket and a roof can bring." As she said it, the two could hear the pattering of rain beginning to beat against the aged stone of the light house walls.

"Wow, you weren't joking," said Karolina, trying to make small talk, as she listened to the rain. "Sounds like a good storm is brewing."

Bali-la just nodded politely and began to suck the juices from her piece of fruit with her fangs, not unlike some vampire. Karolina did her best not to stare. She found it a little unnerving, but it felt almost reassuring to see her guest enjoyed eating fruit as much as she did. And it suggested Karolina probably wouldn't find her at her throat later.

That said, what was this woman? She wanted to ask many blunt questions, but her natural lack of prowess in conversation made it difficult to say anything. As such, she simply continued to focus on eating her own apple in peace, enjoying the rich sweet flavor. It was so much better than having bitter roots for dinner, she thought.

She finished it quickly as Bali continued to indulge in wild fruit, while they rested near the warm protective glow of the fast burning macrocarpa logs. "Another apple?" Bali asked. The witch nodded and received it like a tossed ball. It was odd, but for all her social discomfort, she was happy to have a guest on such a rainy night. 'It feels nice to smile again,' she noted to herself, as she bit into the second apple. Strange company was better than no company, after all.

So, how long after the first series does this one take place? I get the vibe that it's been a few years, or even decades.

The way Bali "sucks" the fruit, I guess, would make any human uncomfortable. We do set out to destroy what we don't understand.

I guess I got spoiled as a youth. We had 'Bunnicula' books, about a rabbit who would 'drain' vegetables white, I believe.

As for Karolina, a lot of her nervous or otherwise awkward responses come from being isolated from any real contact for years as well as being fed a lot of counterproductive opinions by her late family. She's trying.