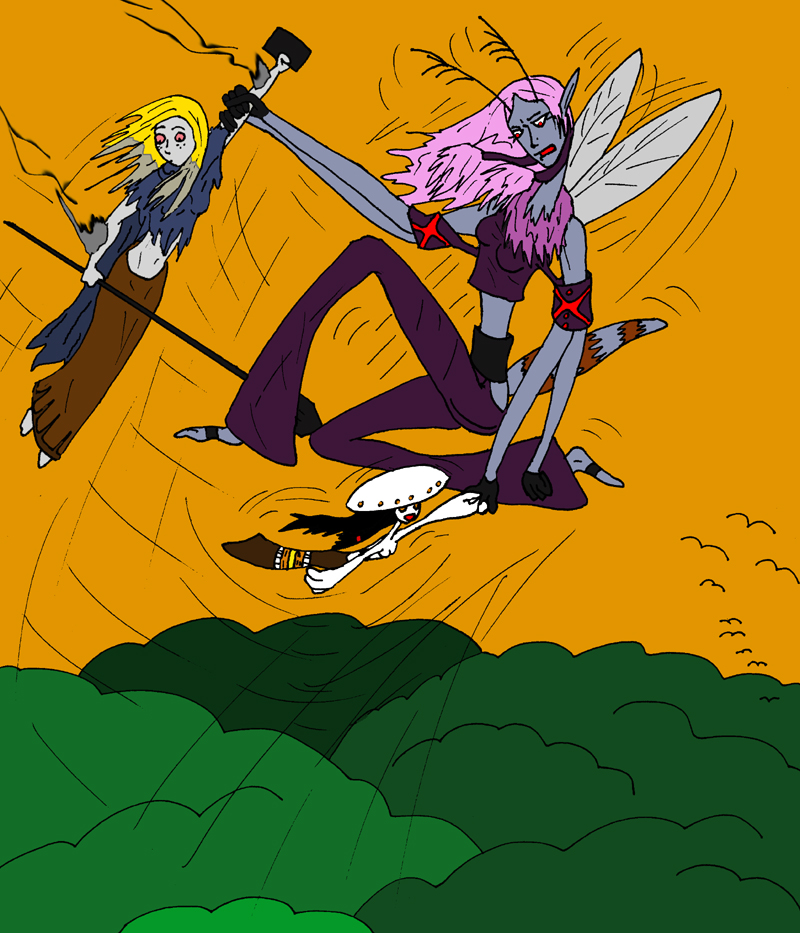 Sensing some possible irritation in Bali's tone and the realization that she was still her subordinate, Karolina remembered how utterly serious she took things like hierarchy in a group. This was not the time to go against the flow, especially with torqued off Longtooths approaching. And what did that mean... someone will fly you out? Impeccable timing aside, where had Bali been all this time??

Making her way with Rottkap hopping in tow, Karolina went to the far end of the mud pit, not seeing a single ladder, rope, or staircase out. Apparently if you couldn't climb, one's arrival was a one way trip.

As they approach the far wall, lacking anything more apparent they could do, the tall and lanky mosquito woman, Astrile, descended. "Which one of you is Karolina?"

The shovel witch paused briefly, taking in the sight of such a large flying Xibalban. "Oh, uh... me."

"Then who is this?" she asked with shortness in her voice, gesturing to the mushroom girl. "I wasn't asked to pick up anyone else."

The mushroom sprite looked at Karolina expectantly and coughed.

Astrile observed her and sighed with a shrug. "Fine. She looks light enough. Grab onto my hands, little one." Happily, Rottkap obliged. And in truth, she weighed so little than Astrile barely noticed.

"But you!" Astrile snapped at Karolina. "No, no... I don't think so. This wasn't part of the deal. Bali will just have to manage without you."

"Wait, what? What are you saying? You think I'm too heavy or something?" Karolina asked, with a shake of anxiety. "Because I can leave the shovel here..."

"No," grunted Astrile, clearly impatient. "The black... fire on your arms. You reek of shadow essence. Get rid of the fire! There's no way I'm burning myself on whatever that is. I have enough problems with shadow poisoning right now!"

"Huh? Oh..." Karolina looked at her grey skin, charcoal hair, and burning shadowy arms. "You know, I've never done this before. Maybe if I calm down a bit. Hang on."

Closing her arms, she thought less of fighting and strife, and just tried to remove herself from what was going on. She wasn't sure if it would work, but that was her instinct and she had been running on as much since it happened in the first place.

Astrile buzzed irritably nearby, not liking a plan that didn't run perfectly as told to her, but in truth, she couldn't leave. She needed Bali more than anything and if it meant putting up with a few complications, so be it. Still, she wondered at the logic of leaving a lone Death Clan to face a pack of snarling crocodile men as they were.

Karolina opened her eyes, focused on her breathing, and found the color re-entering her body. A non-rock colored skin tone, blond hair, and only fading black flames. "I think I'm getting it-"

Astrile fidgeted, heavily uneasy being this close to the ground with two passengers to carry. She wanted to retreat to the safety of the air and without warning, she did.

"Good enough. We're going!" she said, grabbing Karolina with her other two arms and then lifting themselves to an elevation no Longtooth could hope to reach.

"I hope your friend knows what she's doing," Astrile said, as they leveled off at a 'mere' two hundred feet in the air.

Flying friends do come in handy, don't they?

Flying is OP, yo.