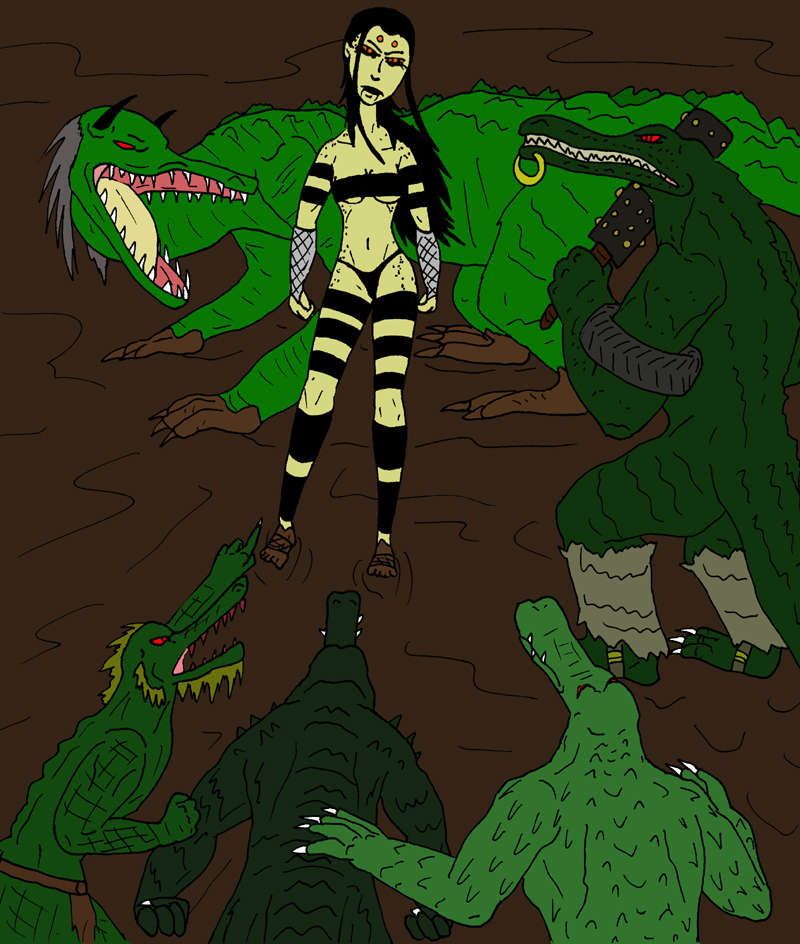 They gathered around Bali, jagged hooked teeth gnashing, guttural moans broadcasting their irritation, all of which accompanied the red glow in their eyes. Anger. Excitement. Rage. They were not truly feral, for their minds were their own, but the crimson flash alerted their opponent of their war faces and intent.

Of those that arrived, many seemed less the rank and file. A dinosaur-like crocodile flanked her, his teeth wide and jaw ready to swallow this fool. Some with weapons appeared, sensing a true attack upon the clan before simply meeting the lone spider woman. Others, with bits of hair, were likely adoptees or those who had experienced 'apotheosis' as Rathalos did, which was to say, non-Xibalbans who spiritually became members of a tribe. Bali couldn't say if there was a reason for this more motley looking gathering, but maybe it was because they were agitated now, whereas before they only ran into the rank and file Longtooths on patrol.

Although many were actively diseased now thanks to the Mushroom Queen's abolishment of their native protection, the symptoms were often too new and mild yet to manifest as seriously as had happened to their king. Why he knelt to sickness first was not known, but perhaps it was predicted by Zanza-Anzulu herself.

Regardless, they knew from his cries and screams that he had been attacked. Now, the mushroom imp and the condemned witch were gone, escaped via the air where they couldn't reach. But here stood a punching bag for their anger and indignity, a lone Death Clan woman with a befitting death wish to honor her clan's name. She attacked none, merely challenging them with her baleful orange eyes. What was this? A fairy? How quaint.

"You were with the witch! I saw it earlier! And I see it now!" howled one accuser.

"What a meager attempt it is... to try and stall us like this. They will land. They will die," gurgled one, practically choking on his own saliva. "The large one smells of sickness. She cannot... hold them both for long."

"Why? Why sacrifice yourself here and now, Death Clan?"

She stared at them icily. "You had only to leave us alone. We were never a threat. You could have even told us to walk elsewhere."

"And miss opportunity?" one slyly questioned.

"What has it brought you?" she asked back, unflinching. "You smell sickness on the Bloodflower. Yet, you reek of sickness, all of you. Are you that unaware?"

A few looked at each other with question. Yes, something did feel 'off' in several of them, but it wasn't obvious. Not yet. And sickness in the way of plague was alien to them for as long as they knew. Word had not spread fully yet about what Rottkap did.

"It doesn't matter," one concluded. "You won't be sent to work, Death Clan. Your kind can't be trusted. And Rathalos can't protect you this time."

Bali glanced in the muddy bog just past them, catching a glimpse of the now deceased Richard 'Rathalos' Walker and Siouxsie Q. She winced in disgust.

"You could have avoided this. All of you. You could have left us alone," she repeated. The air suddenly deepened with pressure. All the Xibalbans could feel it, including those now flying just beyond the dank pit. The Longtooths twitched and hesitated. Something was wrong. They eyed their intruder, hiding their anxiety.

The release of sudden air pressure meant one thing- something strong was nearby, possibly dangerous. Stronger Xibalbans sometimes carried it like an aura or the promise of a threat that could be fulfilled. Any Xibalban sensing the deepening pressure would be given pause.

But there stood only the Death Clan herself, that gaze now grown weirdly dark and penetrating. Despite being clearly of fairy origins by her orange eyes, which rarely intimidated anyone, no Longtooth made a move. Maybe... this was not just some dull witted fae.

"You could have avoided this," she reinforced one last time. Her voice was mechanical and distant.

Conclusively, their instincts confirmed that something was terribly wrong. There was a reason she stood alone.

Death has taken wing and found its prey.