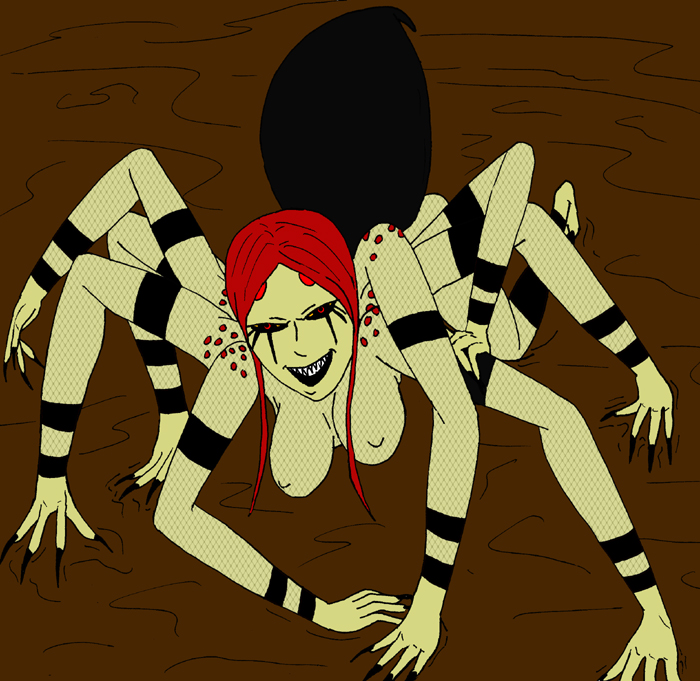 Although they surrounded her, it was a blink and miss it moment. The pressure in the air changed drastically, becoming harsh, thick, and unsettling, not unlike what happened to Karolina moments prior. Yet, this was something else entirely it seemed... as if an old jar filled with stale decades old air had been opened, allowing a stagnant miasma to enter the lungs of all who were present. One couldn't help but cough in that situation.

The fairy was gone. Now, a larger likeness of herself lurched into a crawling position. She had eight striped arms now, her shoulders topped with red spots that matched new brick red colored hair. In the middle of the cluster of arms, was her head, like the blossom amongst an evil looking flower. The face was similar, but more sinister now. Dark lines ran down from her eyes. And those eyes! They seemed maddened and insane, piercing the brains of any who looked at her. Staring, gazing like some demon who plucked black holes from the night sky, surrounded them in a tar soaked orange lake... and deep feral red making islands in the center. It was unheard of. No fairy anywhere possessed anything but orange eyes, even amongst the most talented of shapeshifters. Red eyes was a sign of carnivorous behavior, amongst many other qualities. Fairies were feeders of shadow essence. It made no sense now. But there again was that feeling that something was very wrong.

She could have stood as they did, and as she did just moments prior. She possessed a humanoid body still. But no, she remained perched upon shallow mud, her bipedal legs crouched behind her, beneath a new dark abdomen. It was that of a web weaver spider, bulbous and featureless. A thin mesh of netting or silk covered her now otherwise nude body like a gossamer, protecting and concealing nothing. Only her head, spider's abdomen, and clawed extremities were not dressed.

There was no taunt, no promise of pain or torment, or anything else issued from her lips. Just a horrid maddened stare from those evil looking eyes, which seemed to somehow be watching from all angles, as far as the Longtooths could tell.

What... was she? What was this feeling that made even they, proud and scaled, shiver? No one could figure out what was happening. But that day, in the Longtooth village, something dark and terrible had been invited out to play. What they recognized as the Death Clan woman had called forth something from the abyss itself. And it was her.