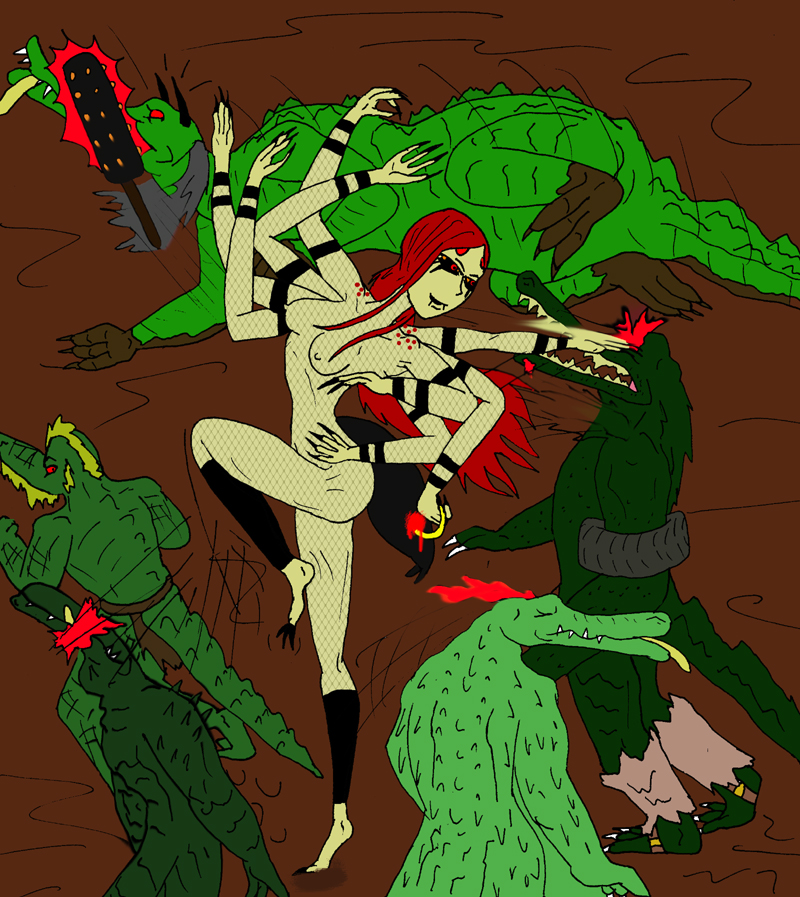 (Hey everyone, there's going to be a short hiatus following this update, due to upcoming travel. I'm getting married! AG2 will be back on the week of October 15th!)

Snapping to attention onto her feet with no warning, Bali began to twirl and dance to some music no one else could hear. This only further served to baffle the Longtooths, who tensed momentarily, but couldn't make sense of her movements. What was even happening, they wondered?

It was said the other day that while not all Death Clan were assassins by caste, they were effectively all trained from birth in that vocation all the same. It was their way, their method of survival. And it was effective, for the clan existed plentifully all over Xibalba.

Bali, despite being merely a courtesan trained in dance and song for an unknown court, knew one thing. The difference between dancing and fighting was minimal at best. One could lend to the other, in fact, with an understanding of the economy of one's movements, something she excelled at. Similarly, this could also be applied to the assassination arts, which was good, as many Death Clan were not necessarily good at drawn out fights. And all battles were essentially uphill to begin with, so what should a good spider do?

All enemies had weak spots, it was just a matter of identifying them quickly. In this instance, when the enemy was well armored with scales and brutish, one might target the eyes, blinding them. Maiming was a perfectly acceptable means of achieving an end to her people, which served them well in spreading their fearful reputation. Because dying left no lessons to the inflicted upon, leaving a victim to survive with debilitating painful wounds would send home the point. Don't mess with her people.

With a series of quick jabs to her bewildered enemies, she darted her now black nailed hands into an available eye, gouging, and rupturing out sweet Xibalban blood in a pleasant spray. Of those struck, her enemies recoiled, not used to such a specific and blinding sting. Toughness went out the window in these cases, for the Longtooths weren't soldiers or assassins... they were brutes and thugs. Physically strong but in the right sense, also cowardly.

Against others,she knew her claws would do little damage to their hides, so she delivered a snapping roundhouse kick as she danced, often striking at the teeth or neck. The former would surely sting their most precious weapons, while the latter would knock the wind from their throats, slowing them. A tough hide did not necessarily protecting against a kinetic shock wave from a physical strike, after all. Again, it was all about exploiting a vulnerability.

Of another Longtooth, after blinding one of his eyes, she grabbed a weapon he carried, and hurled it at a particularly large dragon-like Longtooth creeping behind her. The thug was smacked soundly on the flank of his jaws with a mix of wood and metal studs, sending him stumbling onto his side in the mud, the very same her feet touched but drew no filth from.

The moves were fast, smooth, and ripe with finesse. Longtooths as a whole couldn't match others for agility, let alone the Death Clan. Bali continued to dance, maiming, kicking, and blinding any who approached. But she killed none. There was no reason to, although they might have deserved it.

An assassin, when not killing, sends a message. Pain, fear, and terror were the notes the abyssal spider danced to, and the others surely began to hear that symphony. In truth, killing them would have taken too long and she wasn't well suited to do it, particularly now given their numbers. Fighting a whole village was not actually feasible. So when the nearby Longtooths began to recoil, their morale dropping, they spread that fear to reinforcements, which further gave pause and uncertainty.

The last lesson any assassin needed to know, of course (and this applied to a courtesan who could wear out her welcome, as she knew), was the plan to escape. Rarely did anyone let a true assassin survive if caught, so leaving the scene of a crime was almost more important than the contract itself. Bali, sensing a break in the Longtooths, ceased her dance with a spinning flourish and a sinister wink. With powerful leg muscles, she made for the log wall surrounding the side of the mud pit, scaled it, and fled from the village, hoping she would never have to return to this unhappy place.

But before leaving, she spied upon the skeletal remains of their friend, Siouxsie. She scooped up the carcass of the zombie as best she could. They arrived together. She technically was Siouxsie's Alpha... it was only right that they left together, too.

And there in the mud, now only lay injured Longtooths such as Lockjaw and the quartered body of Richard Walker, aka Rathalos, who stared lifelessly at the black sun in the orange sky of Xibalba.

Wow. Spider Kali lives! And she's just a courtesan/dancer? I'd hate to run into their best warriors.