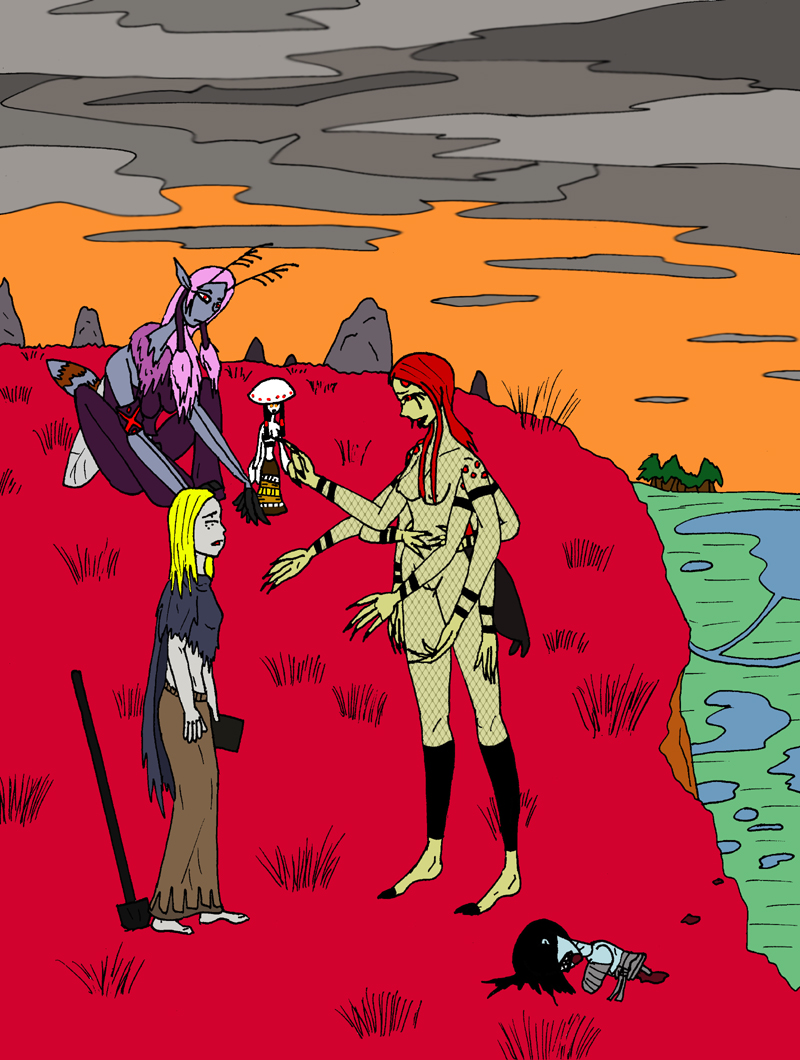 Astrile, Karolina, and Rottkap, watching the action, soon settled down on an overlooking hill of reddish pepper grass just outside the Longtooth's village, although not before Astrile surveyed the site several times by air. The decision to land was made after they spotted Bali-la leaving the settlement post haste, but Astrile was silently more than amenable to the idea as carrying two people was pushing her ability to keep them aloft, especially in her sickened state of health. The Death Clan woman, in her shapeshifted body, spotted the lanky Bloodflower easily and approached before long.

Some ten minutes after the retreating action, the four of them reconvened, not counting Tom Thumb who was still clinging low and inconspicuous in Rottkaps' dangling ebony hair. Karolina and Astrile looked on warily at the Death Clan woman, her form familiar but not as they knew it.

"Zoan?" Astrile asked after a moment of study. It was a Xibalban term for a large 'war form' that some could achieve through greater than average instinct and mastery of their own personal shapeshifting. Zoan capable Xibalbans were often favored as shock troopers and overall assets to their clans.

Bali smiled bitterly. "Not as such, to be perfectly honest. But I suppose it serves a similar enough purpose. I'm not so effective in a fight that I can fight that many Longtooths alone- but having extra arms helps. And those ones weren't much more than belligerent thugs. I just needed to stall them. A little intimidation and a bit of blood goes a long way sometimes."

Bali looked at the other added guest, noting the little mushroom girl. "Oh... hello there." She bowed slightly, knowing enough to show the fungus people some basic respect. She didn't know at the time who Rottkap was or what she was responsible for down in the village, but like everyone, she knew envoys of Queen Zanza-Anzulu were both neutral arbitrators and the closest thing that Xibalbans had to a form of inter-tribal law. Respecting them was a lesson given to most any youngling.

Rottkap made a curtsy, staying close to Astrile. "Hello to you as well," she said with a small smile. "Ah... I suppose you are wondering, but I traveled with your friend Karolina. I had to deliver, um, business here and I needed her guidance to find the village."

"Really?" speculated Bali. She realized this meant Karolina had to be capable of Blood Sensing now, although she did not make the connection of Rottkap's involvement in that. She did wonder about Rottkap's "business" down there, suspecting there was something overall odd about the whole situation with the Longtooths, but it wasn't time to ask about it, as she felt the witch's eyes upon her.

"Well, if you two don't mind, I need to have some words with Karolina in private. If we might have a little space?"

"Of course," chirped the mushroom.

Astrile nodded, but remained wary. "You will still honor your offer... yes?"

"Of course. I'm not going anywhere," the spider told her.

Karolina said nothing, just appraising Bali in her new body. The spider was taller, clawed, and her eyes looked maddened, but her expression under it all was still that of Bali. The Death Clan eyed her and then motioned her head to get some distance from the others who sat patiently. The two of them then stepped away in the warm red grass.
More alone now, they each seemed to take a deep breath. Both women had their reasons. Siouxsie's remains were laid down in the grass near Bali. Karolina glanced at them quietly for a moment before silently facing Bali again.

"You look well," Bali-la said, breaking the ice. "I'm glad that you were here. I had a hunch, but I thought you-"

"...died?" Karolina finished. She nodded firmly, breathing in. "I was certain you drowned, to be frank. I searched the beach. There was no sign of you at all. I think Saiya looked too, but she left me only some vague signs. I imagine she returned home. Haven't seen her since."

Bali nodded somberly. "That's probable. She's a scout for her people. She was on some intelligence gathering mission from what I gathered. She didn't owe us anything. It was nice that she made some effort, though."

"Yeah... well, the only sign I had of you was your necklace, Bali. Mm. I had given up hope that you were around anymore, after that bump in the geyser tunnel," said Karolina.

"And you returned here, of all places," led Bali in the discussion.

"Right. Because Siouxsie was still here. Because... because it all had to mean something. I don't know. Maybe I did it so your seeming death wasn't in vain, too. I met Rottkap at a camp along the way and, well, I guess the rest is history. Longtooths are assholes."

"Pretty much. At least, these ones are," agreed Bali. "I don't know what their deal is." She tried to smile. But there was unspoken tension in the air.

Karolina stared listlessly for a moment, before giving Bali back her black bead necklace, which had been kept under her cowl from Brand. "Here, this is yours. I just kept it safe."

"You did good, Kara. Thank you. This necklace is my one real treasure," said Bali appreciatively, putting it on.

Karolina looked her over again. "Shapeshifted, eh? Can I ask you something?"

"You told me earlier that even fighting one Longtooth was difficult. Yet here you are... looks like you can handle yourself pretty well. Just... why? Why now? If you could have done this earlier... why did we go through all this?" She paused with a flustered sigh. Bali expected her to look anxious or tremble, but the witch remained focused, as if filled with something stronger since they last met.

Bali took on a baleful countenance. "I can't do this quickly. Last time, you were in a net and they jumped us as a whole. You, and possibly the rest of us, would have been ripped apart if I tried. I only could this time because I managed to get them dumbfounded enough to hesitate."

Karolina just watched her, seemingly not quite satisfied with the explanation.

Bali frowned and looked at her own clawed hands with disgust. "I don't like this form. At all. It repulses me. It's problematic. I'm not even any stronger in it, really. It just has claws and some extra arms I can use. And as I said before, it would have been a bad idea to transform on the spot then."

"We follow the rules of the land, Kara. We don't always get to win immediately. What's important is that we get to live."

"We went through a lot just for Siouxsie to die, Bali. Both of us almost died, too. I'm glad that we're here, but what am I supposed to take from this?" It was a bold tone, yet not made with tears or moodiness. Just a very forward tone. Karolina seemed braver since they met, certainly. Although perhaps no less accusing when frustrated.

Bali sat down, weary, rubbing her brow. How to explain how Xibalba worked to an absolute outsider, still operating on the logic of an isolated village? She knew Karolina wanted to make amends with Siouxsie and it was perhaps why the shovel witch was so testy. The whole ordeal was a disaster, though, and she knew it.

"We follow the rules of the land," Karolina repeated of what Bali told her. "So, we get the jump on Saiya and she does what we want. Longtooths get the better of us, and we serve them for a while?"

"Ehh... that's the jist of it. Maybe said a bit simply, but the idea is there," Bali said quietly, feeling suddenly ill. "I'm not going to pretend things went great. But we survived. Again, there was something wrong with this clan... they weren't a good example in some ways. Either they intentionally betrayed us on the issue of Siouxsie or she might have acted out of turn with them. Oh, um... hold on."

Moments later, Bali began to revert back to her normal form, shrinking into a sudden haze of shadow before it cleared just as quickly as it arrived. "Ungh..."

Leaning forward, Bali then retched blood into the grass, holding her waist.

Karolina finally looked uneasy. "Woah... Bali? Are you okay?" She had not expected that from such a graceful and controlled person like the spider.

"In time," winced Bali, wiping her mouth on the pepper grass. She wheezed for several moments before sitting back again, sweat covering her brow. "Ugh... I wasn't joking about what I said. Doing that form is... problematic at best."

Well, that was a lovely adventure. I'm sure this world has all sorts of bizarre surprises in wait for this surreal group of itinerants.

I still can't tell if this is a world of magic or madness.

Some of column A and B. Maybe a bit of Alice in Wonderland meets Mad Max with a dose of Conan the Barbarian after Robert Howard started communicating with Lovecraft. Thanks for reading!

so original. there is NO other comic like this one. you read it...and cant compare it to anything! great stuff

You're too kind, Jerrie. Thank you!

To add my two cents to this. I have long felt that this world, though much more so with the first one when it was underground (though not because it was undergound), reminds me greatly of the RPG Changeling: the lost, a game with the tagline of "a world of beautiful madness".

Especially when it comes to the interaction of this world with any humans that get involved in it.
It feels like I can often find a lot of parallels between the two. Not that, that's a bad thing.

I remember that game fairly well. The original World of Darkness stuff was quite good. I wouldn't be too surprised if there's a little Werewolf: The Apocalypse inspiration in AG, frankly.