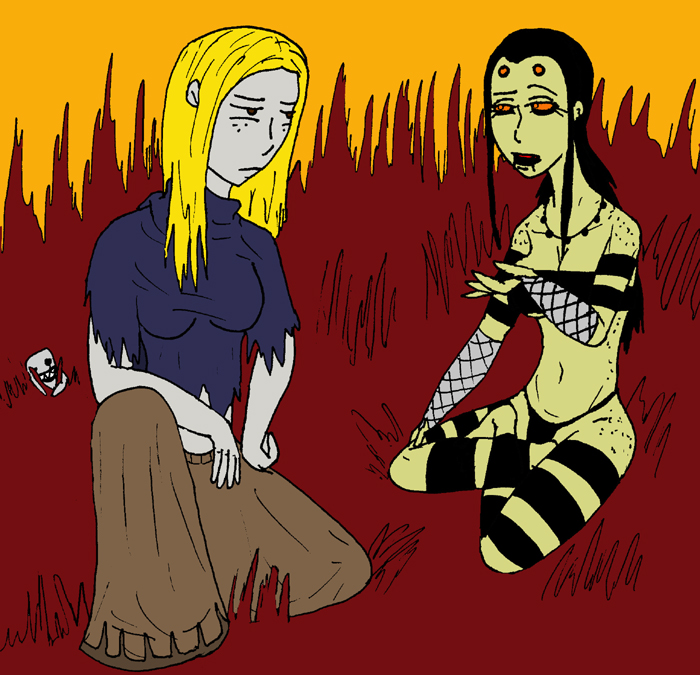 "I'm sorry you're not feeling well..." Karolina commented. "Is there anything I can do?"

Bali brushed it off reflexively. "Oh, don't worry about it. It is what it is..." Inexplicably, she paused, thinking of something as Karolina's words reached her. "Well..."

"What is it?" the witch asked. "Um, does it tie in to what you said at the village? 'We'll deal with this later' or something along those lines?"

Bali looked at the pepper grass, showing signs of reluctance, but ultimately, resignment. "Yes, maybe so. Why don't we have a seat? Er, maybe a little more down the hill, all considering."

Soon, the two sat astride of one another. Astrile and Rottkap were out of sight over the crest of the crimson colored hill, but Tom Thumb, feeling snoopish, discreetly approached behind the cover of the pepper grasses. His eyes and metaphorical ears were that of Brand, so the both of them could listen in.

Karolina searched her thoughts. "I guess... seeing Siouxsie... dead like that. And honestly? Rathalos too. The Longtooths were betraying us. And I started thinking how much of a waste it had all been."

"I thought you were dead, Bali. Maybe I felt like I had something to do with it, since you saved me from drowning and that was the last I saw of you."

The two took a moment of silence, neither looking directly at each other. Karolina rubbed her wrist uncomfortably. Bali seemed entranced by the swaying tips of grass in the soft warm wind.

"I wanted to lash out. One of them went for me, too. I just couldn't handle it anymore. I went from feeling like I wanted to die to... I don't know... anger. And then it all started happening. Black fire, grey skin- I felt like even my spell formulas were easier to process. I don't know if I could have done it without Rottkap helping me feel out Blood Sensing, or whatever it's called... but I felt stronger after she did. It felt like something I had forgotten, coming back to me. But I've never done that, obviously." She looked at Bali appraisingly. "Was it wrong? I mean, what I did? Is that what this is about?"

Bali listened and gradually shook her head no. Karolina felt pleased, but she could still see her friend was troubled by something.

"There's... there's no easy way talk about any of this. And in truth, I debated bringing it up earlier at one point, but I didn't want to overwhelm you with things. I could see you had a lot on your plate, learning about things outside of Adelaide. But in the short time I've been gone, you've come around on your own. Whether what's happened comes from Rottkap or from you, well, I can't say for certain. But..."

"Bali?" Karolina shook her head and gestured in confusion. "What are you trying to say?"

A single tear ran down Bali's sand toned face. She wiped it and took a moment to bring herself some composure.

"For the length of time that we've known each other... well, I know you're not aware, but you deserve to hear the truth at this point. All of it. By the thousand spirits... I can't save anyone, can I?" she spoke, mumbling to herself at the end.

"Truth...? A-about what...?" Kara asked, feeling her heart sink into her stomach.

Bali somberly looked towards the witch, studying her. The Death Clan woman had never looked so depressed in all the time they spent together.

"We've actually been blood enemies," said the spider, joylessly. "More than anything else, we've been at each other's throats. Our meeting in Adelaide several days ago... was not a passing coincidence."