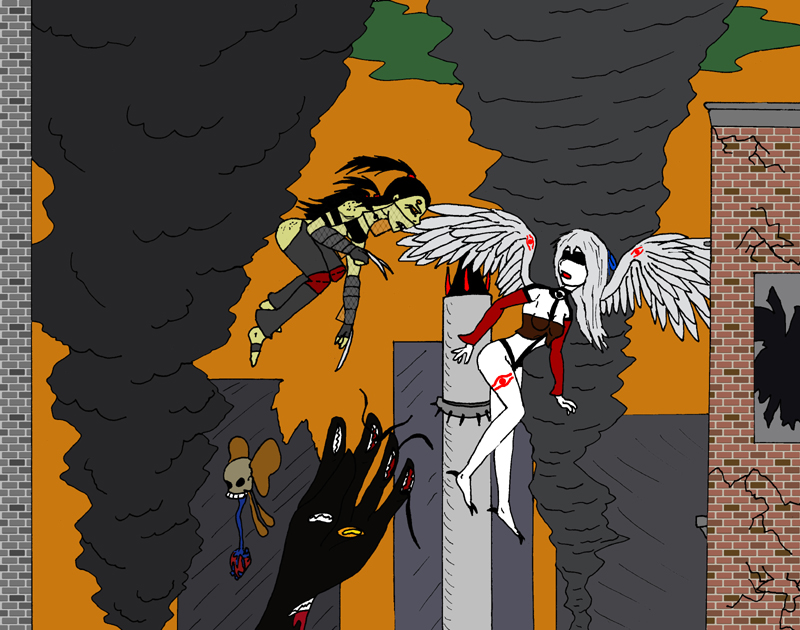 Outer Hell was drenched in shadow essence. It infested every brownstone building, every swarming sting fly, and for all effective purposes, even the air itself. Now, any Xibalban with Blood Sensing could pick up on changes in local shadow pressure. Those changes usually signified something (often a creature) that possessed a dangerous 'potential' strength, which is to say, not something outright powerful, but like unto a piece of wood that sets a forest ablaze. And in the wilds, this was a fine thing. It often gave less powerful beings the good sense to be wary of something unexpectedly strong or to simply give them the head's up to vacate the area for a bit. In Outer Hell, the pressure of shadow essence was as deafening as sticking one's head against a concert speaker. You would hear extreme noise, but no subtlety or definition. With this much shadow pressure, Bali was blinded to finding any one singular entity of great darkness, which was the reasonable assumption of the powerful presence behind Outer Hell. Navigating amongst the ominous spiked concrete towers and ruined brick buildings, this was guesswork.

Which of these aberrations was the leading face behind the threat here? They made noises, gurgled, and chanted some incoherent arcane hymnal, but nothing was obvious. Getting nowhere fast and not wanting to stay in the accursed Louisianan city any longer than she had to, Bali devised the idea that interrogating a lesser entity or minion would be in order. But, as any good assassin, she would have to be precise. She had to isolate some creature capable of sane speech and take it down without stirring up the rest of the locals. It was a sound strategy. At least, better than searching an entire city swarming with monsters.

Staying to the rooftops and spider climbing her way alongside the crumbling structures of Outer Hell, Bali soon managed to find a lone prospect. She had no idea who or what it was, although the form was like that of a feminine snow toned angel, dressed in a series of black straps, long red sleeves, and a brown leather bustier. Her hair and wings were similar to her skin, save more leaning to the shade of a fresh mop head, while her toes and heel bore small black talons. Interestingly, the creature could fly despite wearing some eye blinder tight to her skull. Regardless, the being was otherwise humanoid in shape and so there was some suggestion that maybe she could speak. Or in this case, be coerced to share what she knew.

Scrunched up against the side of a tall old brownstone building, Bali launched herself laterally into the air with her powerful legs, already some seventy feet above the ground, and made to tackle the angel towards an adjacent building's open window. The angel seemed to be milling around slowly in flight, unaware until the last moment that a Xibalban spider woman silently leapt at her from behind. The angel began to spin around, revealing the presence of an Egyptian style red eye on each wing and femoral quadricep, and a look of abject surprise upon her pale face.

I dig the angel design. I always enjoy how you don't skimp on character or environment development.

Appreciated, Garou. I try. I feel that everything should have some kind of reason for looking or being a certain way, even if it isn't immediately obvious. I don't want the weirdness of the AG world to be random and meaningless.