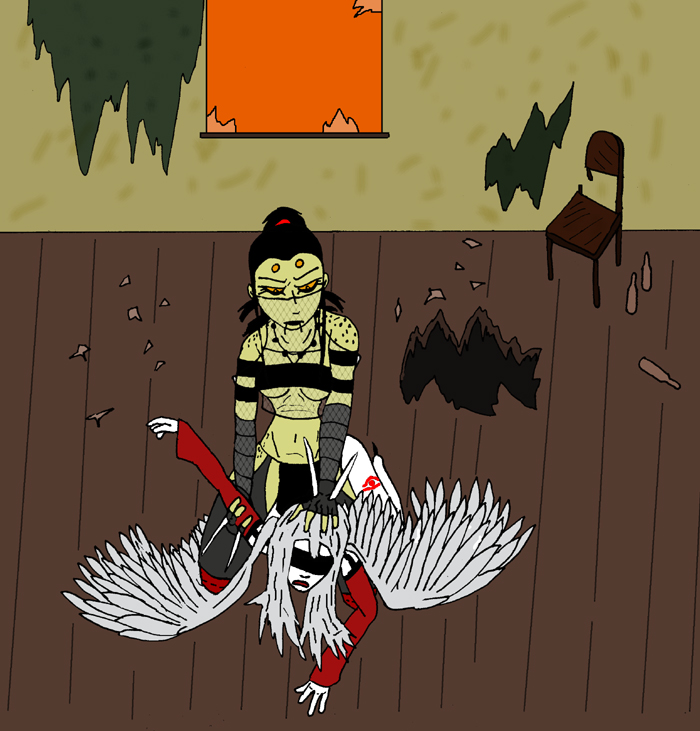 Locking her arms around the white angel, Bali tackled her target and the two fell forward into the opposing window, exactly as Bali timed it. Using the angel's frame as a cushion, the two collapsed upon an old wooden board floor, cracked, dusty, and empty of all but mold and a broken chair. In the chaos, there was a brief moment as the angel began to push herself off the ground, but Bali still had her in her grip. Viciously, she lowered her knee on one of the angel's wings, pinning her down like a moth in the collection of a lepidopterist. Bali then twisted one of her prey's arm back, keeping her relatively on all fours but akimbo upon the ground. "End a fight, don't conduct one," her elders in the Death Clan once told her. "If the opponent cannot fight, what battle was there? Remember what you are at all times."

Mounting the angel's back, Bali used her weight to keep her down and placed a hand on the head of her target, keeping her perspective low. The angel squirmed and shook, but couldn't seem to rise with the dancing assassin lurched over her. Aside from grunts, she said nothing.

"I'm not going to kill you," Bali said, her tone dark with purpose. "But I will break your little wings if you don't tell me what I want to know." The take down and delivery was professional. It was a bit of a far cry from how she would be some years later. "Who runs this place? Who is the master?"

"I will tell you nothing!" the angel spat, physically tense and taut, but weaker than Bali. "And you're no one of import in this place... of that, I assure you!" Bali felt the angel try to turn her head, but her grip upon that white mop of hair disallowed it. It seemed she didn't have the most solid idea of who attacked her.

Bali sighed. "Then maybe you need a change of perspective," putting the emphasis upon the suggestion.

Having lied about shattering the angel's wings, Bali-la covered the angel's mouth and leaned in, sinking her fangs into her prey's shoulder, whereupon she began to inject spider venom into the defiant flyer. The angel immediately tensed, thrashed, and tried to scream, only to be muffled. She bucked and tried to get to her feet, but the spider woman was too rehearsed and too strong.

In minutes, resistant attempts to wrestle Bali away began to give way to strange feelings of surrender, confusion, weakness, and lethargy, as a cool feeling began to relax the angel's body against her initial will, until she soon went quiet and lay limp on the floor, scarcely conscious and nearly paralyzed.