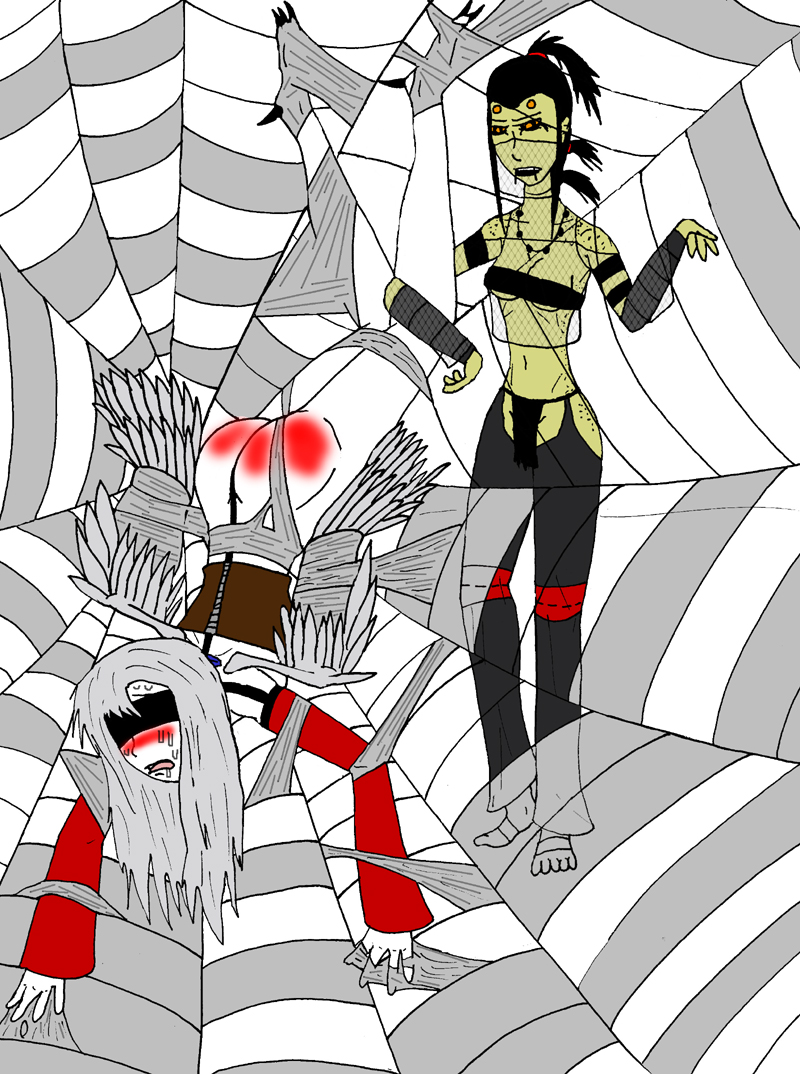 When she awoke, the angel from Outer Hell found herself securely held in place. She was suspended in the air, face forward, somewhat diagonal to the ground. Groggy and disoriented, she attempted to flex her limbs as if to stretch, but her arms were outstretched before her, going nowhere. "Huh...?" Her legs were secured at the knees and feet, and similarly, her fragile wings were heavily wrapped up, unable to extend whatsoever. It took her a solid minute before she realized she was stuck in a large spider's web in the room she crashed into earlier.

Startled, she began to fuss and struggle, feeling the tight stickiness of the trap holding her fast. It creaked and bounced, with the silk stretching where she was strongest, but it was refusing to let go. In fact, as she strained and fought, more strands seem to attach to her, making it even harder to move. "No... No!" she shrieked, feeling a natural terror that accompanies those who fly when trapped in a web. It was a primal fear, more pronounced than that of others, as their unique gift of moving anywhere had been robbed from them. And with wings being thin and delicate, feeling them trapped as such was horrifying, as what once allowed freedom now promoted her imprisonment, for they had no chance to break free of the stifling silk on their own and she couldn't move her hands to preen them either.

"Look who's up," Bali said from behind, rarely drolly. Befitting a child born under spider's design, even she would take pleasure in watching 'prey' caught in a web of her own making. It was a sense of accomplishment, similar to a woodworker completing a cabinet of his own design and style. The veil wearing assassin smiled briefly before assuming a more professional composure. It was not the time for too much enjoyment, as satisfying as this was.

Bali-la had run into a problem while the angel had been paralyzed. That black mask-like wrap around her eyes? Couldn't be removed, it turned out. At least, not easily. It seemed to be sewn into the skin... not just upon it. And like a tree growing around a metal sign, the skin eventually took the material as part of its own. She had never seen anything quite like it. How did this come to be? She felt uneasy in tearing at it, as a result. It would be messy, awkward, and possibly useless. Bali originally wanted to hypnotize the angel into telling her what she wanted, but the eyes were off limits it appeared. She had no idea how this angel could detect things so well as to allow flight- what bird didn't rely on sight? Maybe she was more like a bat with sound and radar? There wasn't time to investigate, unfortunately. Bali was on a mission.

"I'll give you one chance, although I know you'll throw it away. Tell me who is in charge? Who is the master of this place? Tell me this truthfully and you'll not be hurt."

"No! I'll speak nothing to you, you Xibalban devil!" the angel hissed, thrashing angrily. "There are powers here greater than you can ever comprehend."

"Maybe so," Bali said calmly, cracking her knuckles discreetly. "But in this little room? They don't exist anymore."

"What are you babbling about?" the angel responded tersely. Bali looked at the meager costume the angel wore- there was little else than a leather strap between the legs that connected up to the throat. Maybe not surprising since most of Xibalba was occupied by half naked fashions, but the appearance gave Bali the idea that along with the mask; this angel was someone's slave.

There's an old Death Clan proverb that went, "If you are persisted by a wasp, punch it." To most outsiders, it's a peculiar line. For her people, it was a lesson given at a young age about not responding to the understand of others in a straight forward way. Most beings, when harassed by a wasp, will swat at it or something similar. A wasp knows how to avoid this usually or even counter with a sting. But a balled up fist, well, it's not used to. A quick jab to a buzzing wasp, with an emphasis on speed, not power, dazes it and the projected bone in one's fist doesn't give it purchase to sting effectively, unlike an open palm would. The wasp has no life skills to deal with being punched, so it drunkenly wanders off, confused, unable to respond back effectively. An assassin knows it's not always about killing. Anyone can kill.

Bali sighed and walked closer to the angel from behind. "What you need to understand is, in this room, there is just you. And me. And here, I am your master. Let's begin."

Bali took a handful of the angel's hair long moppish hair and with her other hand, smacked the angel on her near exposed ass.

"Ow! What are you doing?" But Bali had no more words for her. She hadn't earned words.

So Bali did it again. And again. And again. Each time, the angel fussed, trapped hopelessly in silk, squirming as Bali spanked her with erratic timing between strikes, allowing for no way to guard against it. Every so often, Bali would rub the reddening cheeks of her prey soothingly, allowing for a moment of relief. But then, she would be spanked again. Each time, in a longer series.

The angel protested angrily at first, struggling fiercely, but she only became more entrapped and worn out. Soon, however, she began to cower and wiggle. Bali would always pull her back into place. Then the angel began to plead and beg, but Bali didn't respond, because it was not time for words yet. Things would happen on her approach, no other. The angel had to learn that. And it reminded her that all her resistance had led to this, being humiliated and dominated in a spider web. The only way out was to give in. To surrender completely.

Eventually, the angel ceased her struggling and lay mainly still when not being punished, blushing and breathing heavily. She moaned and feigned weeping with each smack, her mind in a confused state she had not known before. What was happening to her? It hurt, but it felt... good? She felt herself losing self control to the spider woman, who yielded for nothing, only punishing, only taking control of everything.

After almost an hour, the angel lay in the web, trembling, in her own little world. There was nothing left. Her hind quarters were bright red. Bali looked her over, as she rubbed her now sore palms. She spotted a blue ribbon in the angel's hair and calmly took it as a trophy. Only then did she ask, "May I have this?"

The angel felt the ribbon removed and nodded feebly. "It is yours. All of it, is yours," she said, gasping and shaking.