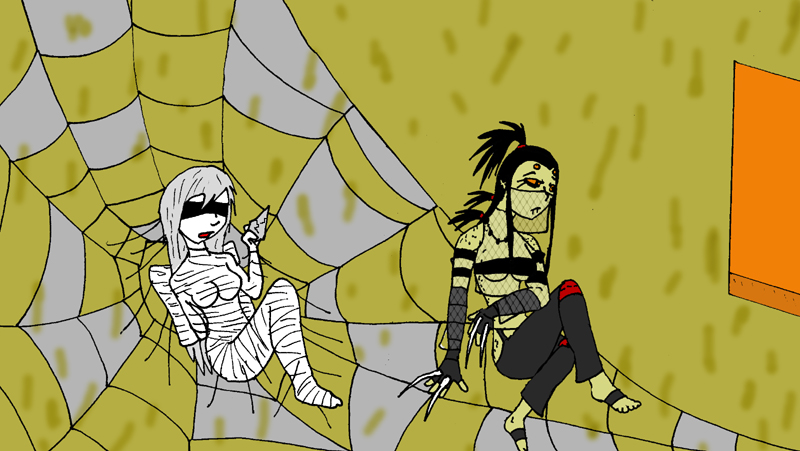 The angel had been coerced enough, Bali knew the signs. The Death Clan was rife with perverted tactics, and BDSM-like ways of convinving an enemy to surrender where far from unheard of. Such were the rules of hierarchy- you could be quite tough, but if your mind wasn't up to the task, someone would eventually break or coerce you to serve them. Not everything had to be a bloody tight. Sexual practices in and of itself, were a legitimate weapon.

She gave the angel a soothing rub once more on her hind quarters and then proceeded to wrap the girl up in silk from her waist gland. The angel put up no further struggle, defiance, or question, just focusing on her breathing and trying to come down from the endorphins of being unexpectedly disciplined like that. She had mentally bowed to the spider woman, and so she didn't question being wrapped up. Bali was free to do whatever she wanted now, in the angel's mind, although she would make some token resistance if the Death Clan planned to kill her. Of course, that was far from the fact.

Once the angel was bundled up, Bali left her head uncovered in a cocoon, as well as one arm. That free hand was given a scrap of sharp broken glass, found in the moldy apartment room. The angel looked to Bali, however blindly. She wasn't sure what was intended.

"Your freedom is yours once I leave," Bali said. "That glass should suffice you enough to cut yourself free in time. What I need from you is an answer. Where is the master of Outer Hell? What are they attempting to do here?"

The angel seemed distraught that Bali had nothing further needed from her. Their arrangement was purely transactional. With that, the angel sighed. She was still bound by the rules of hierarchy to answer in good faith, for Bali was now her master. At least, for a time.

"The east edge of town, where no light of the orange sun shows. There, you'll find the ritual," said the angel. "There is no master here, but that is the point. They have taken a girl from an neighboring refuge for humans... there is something special about her. Like a caterpillar, she will be reborn."

Bali raised a brow and turned to look out the window to the orange lit city. "They killed an entire town to gather one girl?"

"I do not know such details," said the angel. "I was not part of the excursion. I know only that she was unlike the others and stood out as a beacon to Outer Hell. The monsters could smell her from miles away."

Bali pondered. What did that mean? "Does that mean her shadow essence significant?"

"I don't know that. I cannot feel the pressure of darkness when it is everywhere."

The angel looked down. "I don't. My name is Amare. Like many of the beasts here, I'm but a moth to a flame. Most anything here is stronger than I. But I was attracted to a being who was brought here. The scent of his gloom was intoxicating. Only now, I fear he is part of the ritual."

"No. A blackened spirit, high and lording. He is to be fused with the girl. Or so I believe. I have not the courage, strength, or power to do anything about it. I can only be an observer here."

"What...?" Bali's eyes widened. What in the world was happening here? This was the first she heard of a spirit being kidnapped. "They're going to fuse a human girl and a dark spirit?"

"It seems so, but I know not the reason. There are forces here, numerous, that I cannot comprehend or question. I fear... it is too late for him- his essence seems to have vanished recently, so the spirit may be what equates to dead. But the girl, she remains yet. They would make a leader of her somehow, once the ritual is complete... why, I do not know. Mm. You have an interest in her?"

"In a manner of speaking..." Bali's mind raced. Things were more complicated here than she was aware of. "Amare, I should not waste any further time. But what of the dark spirit you mention?"

"He is Chernobog, an incarnate of black magic and the night. Darkness and demise are his playthings, Death Clan. Be advised o' master... if he could not hold his own against the forces that be, you will not do better, with all respect."

Bali took in a deep breath and looked unhappily to the east. "Then you would be surprised of what I can do, Amare. I'm sorry, I must go. May we meet again."

Amare, lounging in the web, listened to the Death Clan leap out the window. When she was alone, she spoke aloud. "As you say. But I know of sacrifice, perhaps more than you, web-spinner. What are you willing to lose to Xibalba today, I wonder?"