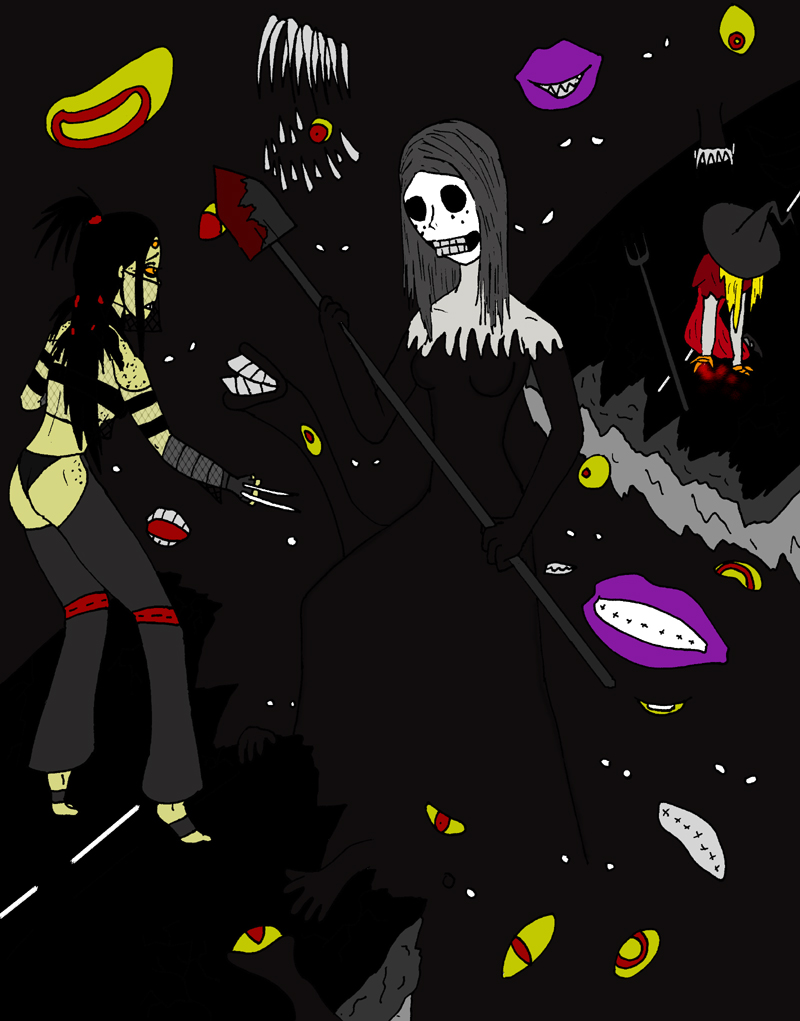 The city had completely faded to nothingness, just alien goat-like eyes, leering mouths, some sharp, some flat. Only a narrow section of the street remained, and Bali could feel a curious sense of motion within it, despite the otherwise solid feel. The essence of shadow was tight all around- nothing could be discerned in detail, but the pressure was becoming almost deafening as she walked forward. Nothing about this could bode well. White eyes began to emerge from ahead. Small, but more symmetrical than the other features she was witnessing.

There was a break in the road, now incredibly dark even by her standards. On the other side, what appeared to be a witch in a dim red mantled dress was lurched forward. Blood visibly stained the asphalt, perhaps coming from her face, although Bali could not determine that for certain, as her wide brimmed witch's cap obscured her countenance.

Then, within that break of the road separating Bali from the unfamiliar witch arose a tall monstrosity from the nothingness that composed everything else... bearing a shovel with old bloody stains. This was surely the source of the shadow pressure. Wordless and silent as a tomb, it rose, looming over Bali easily.

In all her experience, Bali-la had no idea what this was. It's face was skull-like, yet not entirely, for freckles marked the pallid cheeks. As if some cross between life and that of the infamous Shadow People that silently roamed the land. The eyes were empty, void, and soulless, staring through the Death Clan. It was female, bearing long lifeless grey hair, and a dress composed of shadow and darkness, indistinguishable from the gloom she emerged from.

"Are... are you the master of this place?" Bali dared ask. But the monstrosity gave no light of comprehension or care.

Then arose the voice from across the broken street, that of the witch. "Xibalban... I know not why you are here, but if there is any sense within you or even if there is pity for another... you must stop her. She is being compelled by forces beyond her reckoning or mine alone. The madness of Outer Hell flows through her form!"

Bali searched about in exasperation. "Who are you? What is she?"

"Never mind me!" the witch snapped sternly, before easing off. "Her name is Karolina. She is important to... many, myself included. She was taken from a nearby town and made into this thing- it cannot be allowed! She's being used as a mother to promote corruptions. Left alone, nothing will be alive in this area in the long run. Do you understand me?"

"To a point... what am I to do?" Bali asked suspiciously, as 'Karolina' sized her up.

"She is precious... but... I know of no weakness that be exploited now. Do what you can. Your kind are no strangers to violence, yes? Xibalban, put her down. She is corrupted beyond measure, though no fault of her own. It is mercy. You understand such a concept? Do what comes naturally..."

With that, the witch in red started up, grabbing a nearby pitchfork, and dashed further into the darkness beyond, ending the conversation.

Bali grimaced, as Karolina began to move. An attack was coming. But that was just the immediate concern. Corruption? Bali's feet began to move from side to side and a cautious start of a dance began. Bali could hear the old music in her ears, undetected by anyone else here. And she began to sing, as Karolina raised her spade to crack the Xibalban's skull wide open.

(It's that time again. While I'd like to be a lil further ahead in the story than where we are, it's time for the annual holiday break. We'll pick back up with Bali and Karolina's tale in the beginning of 2019. Have a happy Christmas and New Year, everyone!)