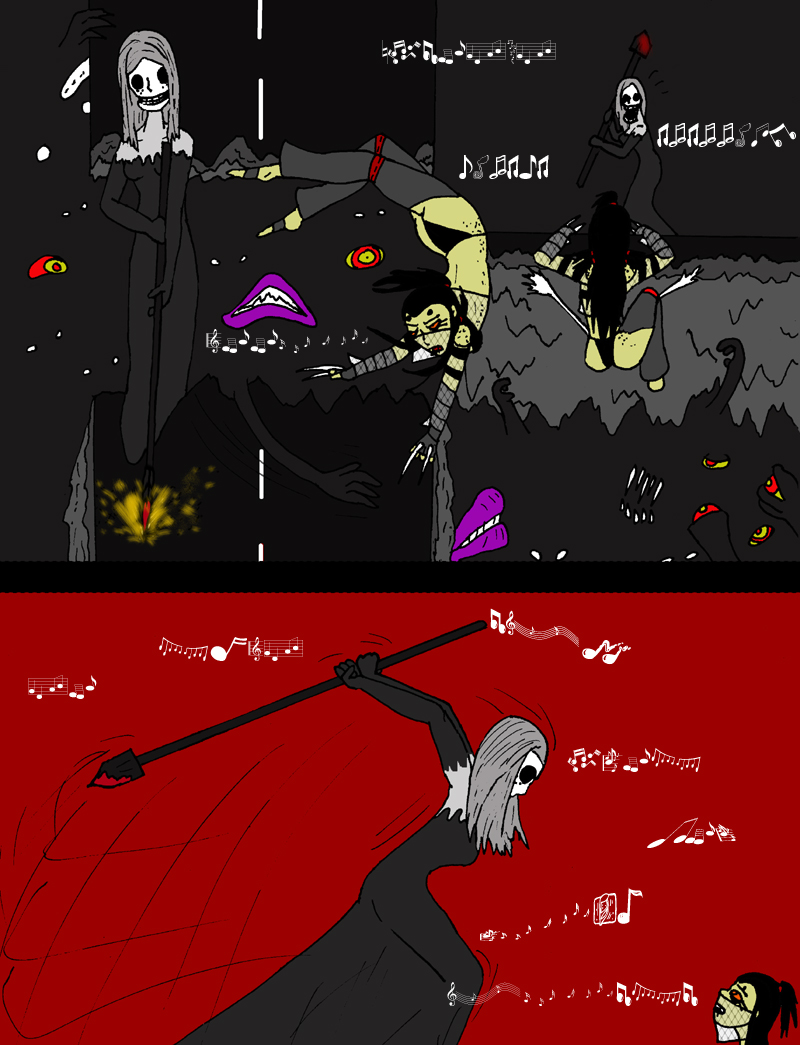 The scene was unsuitable for a battle. A tight, practically floating segment of road, in the middle of a void controlled by the disembodied faces and entities of Outer Hell. Additionally, Bali was cut off by a gap from her side of the road to where the witch ran down. This wouldn't do. And there was the maintaining the music in her mind, as Bali began to breathe it out, lilting a wordless melody as it began to build. There could be no Song without breath control and right now, concentration upon the Song was everything.

The wraith, as she began to broadly think of it, raised a blood stained metal spade, now done with merely judging what Bali might be capable of. The road was too narrow to dodge upon, especially with her training in dance. And the wraith had a significant reach advantage, as it stood in the void between the roads, holding the long haft of the shovel. Sensing an attack, Bali somersaulted laterally, ending in a handstand at the road's edge as the spade was brought upon the road with a loud violent clank, spraying sparks and loose rock.

From there, Bali glanced at the unattached hands, eyes, and teeth below the road and to her favor, found them recoiling as she sang. Good. They knew the sound of the Song itself. They knew what it would do to them if they drew near. The wraith not so much, but either way it meant the pits below, if they existed solidly, wouldn't be fatal to enter. Still, Bali was not eager to find out what was past the impenetrable darkness. So she clung to the broken side of the road and peered back at the wraith, who craned its head towards the Death Clan.

Quickly, Bali attacked two web cords to the side of the road over the abyss. Any spider would typically make a safety net over such a gap, but it would serve another purpose beyond merely preventing an unintentional fall.

Then, with unexpected speed, the wraith dashed, spotting Bali's head peeking out and raised its shovel once again, leaning back for a powerful downward smash. Bali's heart pulsed rapidly as the song began to pick up complexity, further repelling the shadowy creatures around her. The wraith emitted a hissing groan and swung down with the shovel toward the Death Clan's skull. It was exactly as Bali predicted, so the Death Clan let go of the road itself...