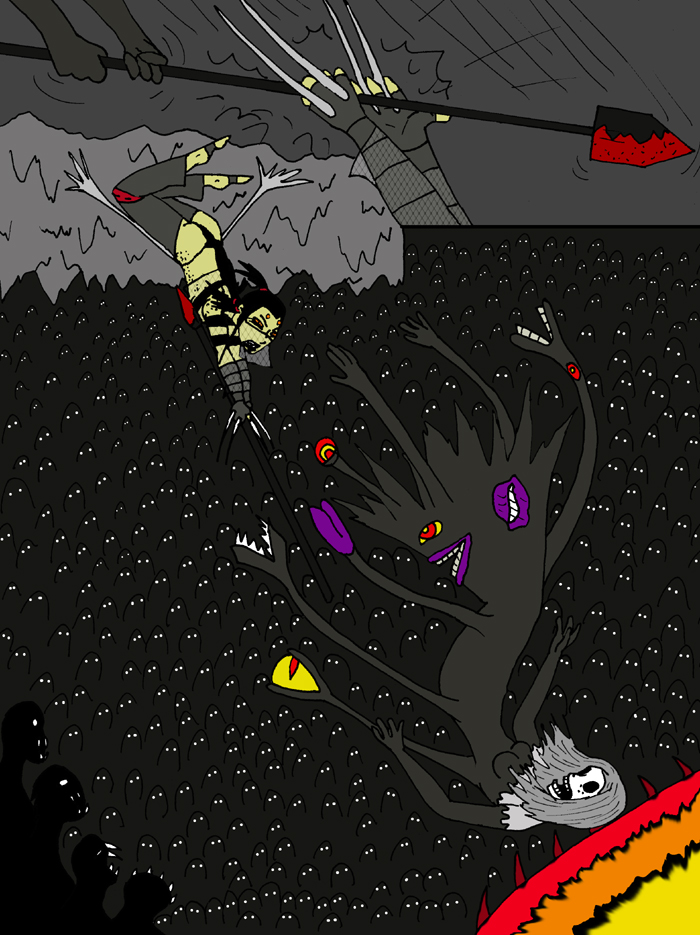 With the shovel driven down, threatening to cast her into the darkness below if not brain her senseless, Bali grimaced and instead clapped the haft of the spade in her gloved hands, halting the swing by a precarious last few inches. The wraith observed the result with a moment of confused hesitation, not having expected the result. Held in place against the side of the broken road by her web cords, Bali twisted her body and hissed loudly amidst a moment of song, swinging down on the digging tool with all her might. Caught off guard, the wraith, still holding its own side of the shovel, was pulled forward and thusly, over the edge.

Flung out of control with its weight used against it, the wraith slipped off the spade and became gravity's victim, hurling down below. Pseudopod extensions of disembodied anatomical parts shot forth from its body, trying to reach Bali in retaliation, but it didn't react fast enough. Groaning hoarsely, it fell further below, with Bali's growing song proceeding it. The spider woman was glad the entity wasn't quite prepared.

With the rising music of Bali's voice aimed below, the shadows recoiled sharply, revealing a great bowl-like pit of empty blank humanoid forms standing in place, staring upward with dead white eyes. She had seen a few just before, but these numbered in the hundreds, if not thousands. In the center of this population, a great toothed maw of red, orange, and yellow awaited and swallowed the falling wraith into the open tunnel of its wretched Outer Hell throat.

"One attack. End it decisively whenever possible. You are of a clan of assassins. Never fight. Kill. Maim. Or end it, one way or another," came the advice of the teaching sages of the spider people in her head.

Bali blinked for a moment, having no comprehension of what she was dealing with here. What were these things? What was that maw? And what happened to the wraith? Nothing made sense... but she could feel the overbearing shadow pressure here. And if the wraith was important...? Being down there might not have been enough to defeat it. The wraith woman was supposedly what was to be the new master of Outer Hell, although none of it felt quite right by Bali's instinct. It seemed underwhelming. Maybe this was the best place to be, however. The witch, whatever she knew, would have to wait.

It was time to unleash the Song.

The faces below quivered in their near shapelessness and gasped if they had mouths. Bali wouldn't understand what they were until later. But they, in their unknowingness, could feel an ancient gift coalesce from Bali's throat to that of the maw of the shadowy corruption. At the very least, she would have a great audience.