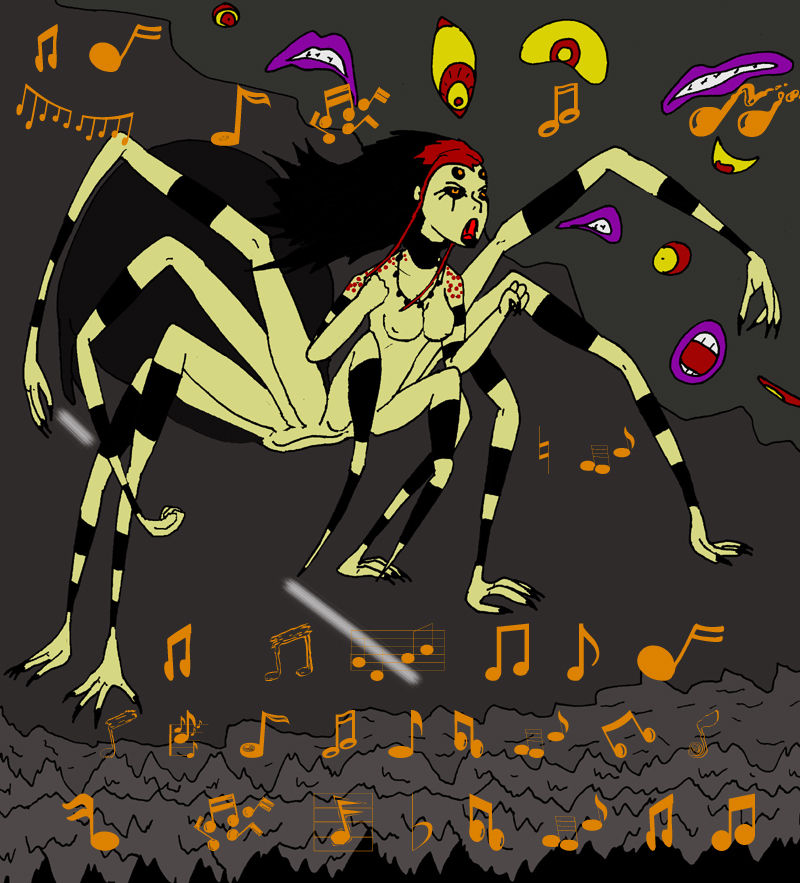 Drawing herself back up to the broken road's flat top, she took a deep breath. She remembered what was involved. Letting go of some things was essential to the Song. It was one of the reasons fairies, let alone spider fairies like herself rarely practiced the art. For the talent of shape shifting had originally been passed on to all Xibalbans going forward by the fairies themselves when the two first met. And those originators knew well of various magical approaches in the world. Alas, the art of shape shifting and the gift of the Song were not exactly compatible. One was cosmetic change intermixed with physical illusion and a hint of personal conjuration. The Song? It was an expression of purity and all that was true. It was raw magic that could not be focused by any other means than simply singing it aloud. The two could not co-exist at once.

And so it was that Bali-la, after so long, was forced to reveal to the world what she really looked like. It was not so different from other spider fairies at the start of their lives, but much more matured and grown. It was the taurian body of a spider with Bali's skin, and the upper torso of the woman herself. Fierce black streaks ran from her eyes, her hair grew even more wild and was capped with red, and the spots on her shoulders began speckled just as crimson. She grew eight long legs, with each ending in a black taloned hand. And her human legs regressed into something of that resembling pedipalps. Lastly, a thick bulbous abdomen stood aloft beyond her thorax, a sooty grey color in contrast to the rest of her. Singing the wordless Song, Bali could not maintain her well practiced humanoid guise.

As the Song grew louder, stronger, filled with the memories and emotions of one who had been lived so long and full of a life, the shadowy eyes and mouths of Outer Hell's surrounding walls began to recede, their lunatic components showing discomfort and perhaps fear. They could not process the Song, it was their antithesis on every level. They were composed of all things wrong and fell. Yet, they could not drive themselves forward, and without the wraith present, they recoiled in terror, as the song filled them with foreign dreams and visions of Bali's heart. And so, louder and more powerful she sang, the notes resonating, echoing, and scalding the foul place. It was time for a crescendo to be unleashed and for Outer Hell to experience the true force that was the gift of the Song. Fortunately for Bali-la, the arachne body of the spidery fairy had far better air capacity than that of a human, so this last piece of the Song would be devastating to anything corrupt.

In this, Bali hoped there was a chance to save the human that Outer Hell made into the wraith. She would defy the witch's request in this. She didn't know what her intentions were, but Bali did not innately like to kill. She was a courtesan, a songstress, and an entertainer. She liked other people. Hopefully, for sake of her tribe, what she would do here today would be considered 'dealing with the situation' as far as the Death Clan was concerned.

The Song delivered in this manner was incredibly powerful, but it would not truly hurt the innocent. It could even scour the contaminated, those who could be saved from external corruptions if there was something left to save within them. In that, the witch and her motives would be revealed no matter what.

New fan art up in the Bonus Art section by Grey Garou!

You've had some pretty wild and surreal art on this story, but this one honestly leaves me at a loss for words.