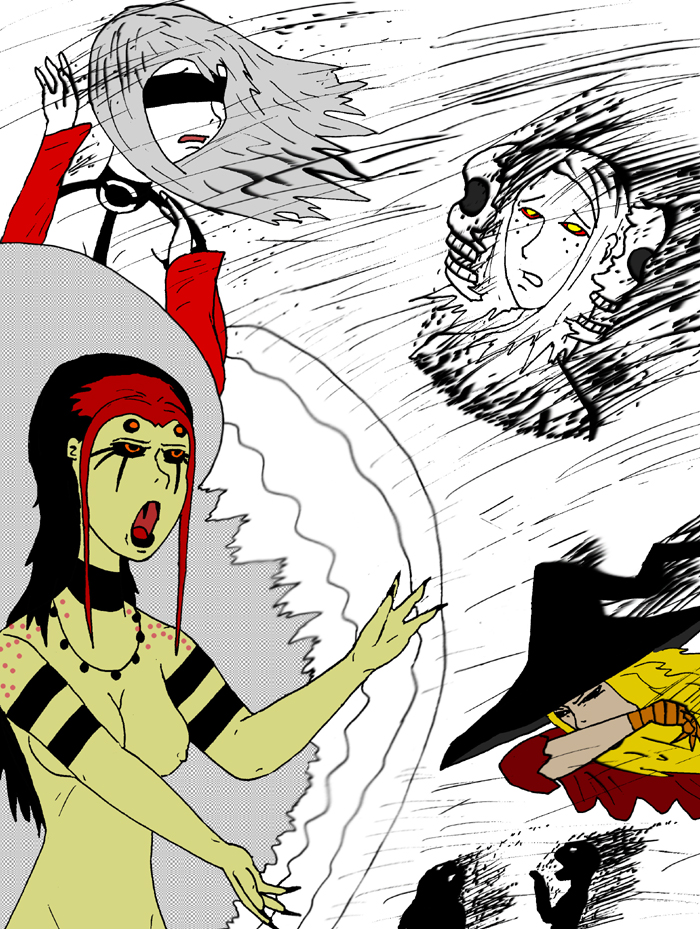 It was important to note that as far as the Song was concerned, it didn't care about notions of good and evil. It was not a force that determined right and wrong, or light against dark. It was purity. The cleansing of inner contamination from something outside. Upon reaching such things, it scoured them, burning them to ethereal ash. But it was not equivalent to a holy knight driving the darkness from land. Many did not understand that. For one, the shadows that compose the world were naturally as pure as the Song itself and the two did not necessarily interact. And to put things even simpler, even the concept of evil could be pure. The Song would do nothing there. It was an abstract magical force, which in some ways could be difficult to understand and thusly few spoke it.

But Bali, as many things she wielded in her life, was well rehearsed and trained for this. Of the singers that had been, she was neither the greatest nor the worst. But of this ancient art, she was still alive and she was here in Outer Hell, which was contamination itself, even if it cloaked itself in the shadows of the land.

Bali breathed out, her wordless musical syllables taken to a single rising tone. The Song pulsed at first, as if giving a warning, and then flowed. The sound crept through everything. Every inch, every pocket, every crack, carried it. There was scarcely anywhere for the force of Outer Hell to hide.

Immediately, the faces, hands, and warped darkness screamed in unison, retracting and burning upon itself. It was faced with something it feared and was vulnerable to, but couldn't quite understand. Disintegrating violently in spasms, it burbled and belched its own wretchedness, becoming destabilized and faced with unfathomable mortality. Shreveport in turn, began to become visible against from the surrounding oozing gloom and the monsters once attracted to the place became unsettled, retreating away from the city upon hearing the bird-like tones of the Song if they could.

As for those within it, such as the witch, the wraith, and the angel, and many more yet unseen, they too reacted in their own way. The angel herself, a moth attracted to a flame, had freed herself with the glass shard in Bali's web. But she raised her arms to cover herself from the sonic fury of the Song, finding bits of soot flecking off her milky skin. It confused her and knew something with a purging quality had struck her inadvertently. But as she watched the once invisible black bits leave her body into the hollow air, she was not too terribly changed, as mainly her compulsion to Outer Hell withered. Which is to say, her other compulsions did not, because they were of her and her alone.

The witch shrouded herself behind her arm and crouched, ducking to avoid ambient debris flowing from the force. She scarcely knew what hit her at first, but the direction told her it was from the Death Clan woman. In moments, she began to guess just what had occured, being learned in all things magical, although she had never experienced the Song first hand. Of many, she burned the least. Outer Hell had not infected her in the first place and her business here was otherwise. But as she weathered the Song, she heard the birds in her ears and felt something undesirable. Guilt and remorse for a series of dubious decisions.

And yes, the Song reached the wraith and all the black formless entities surrounding it in the bowels of Outer Hell. She was the real prize, but Outer Hell could only expel her, while still desperate to hold onto something. The large shadows surrounding her burned and singed, and the death mask over her face cracked and snapped, revealing a icy pale skinned girl with freckles underneath with yellow and red eyes. She was the last survivor of Shreveport, if one could be said to exist.

Indeed, purification doesn't have to have anything to do with heaven or hell, good or evil. An honesty of essence, the total rejection of any kind of corruption of the core being, regardless of what the being is OR what the corruption is.

Indeed, you get it. It effectively tries to return something to a sense of its own honesty.

The idea is the ability is very old, before considerations of an us vs them mentality of right and wrong. So it's meant to be esoteric, rather than a sonic breath weapon that emits 'pure goodness' or whatever nonsense. I was a bit worried no one would get it.