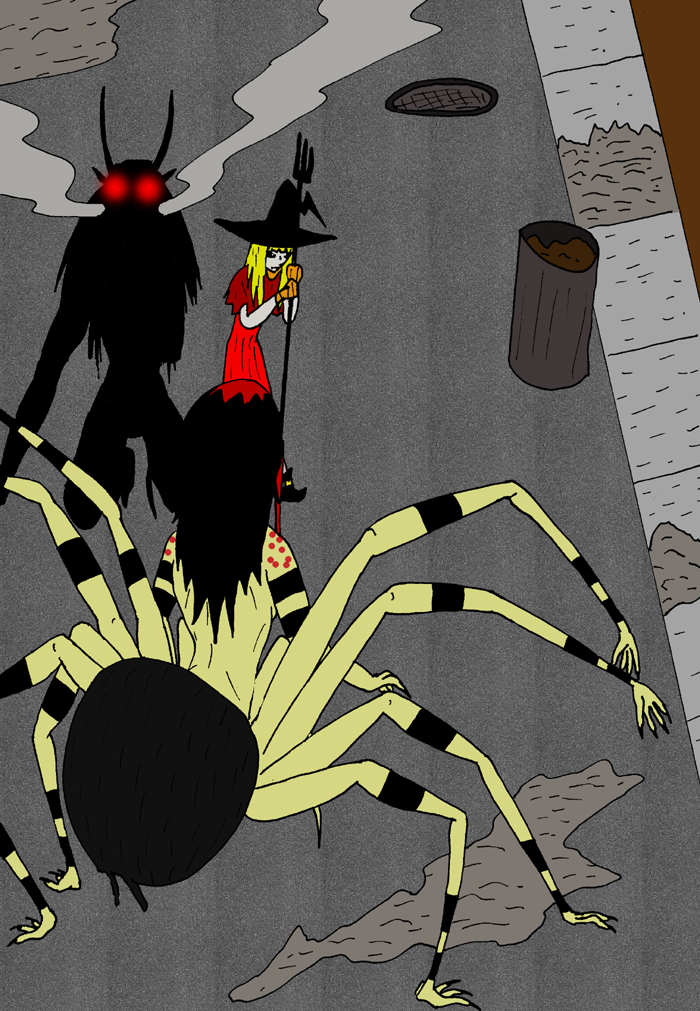 (New nsfw Bonus Art up! And now, back to the story.)


Once the soot of corrupted darkness burned away, either driven off or destroyed by Bali's employment of the Song, she took a moment to catch her breath and hold her throat. The higher the octave, the stronger the sound, the more strain it put upon the singer. Simpler hums and lilting melodies, such as her song of greeting, were of far less intensity on the throat. What she did made her esophagus burn, figuring in the length of time she had to maintain it. On a smaller level, if she chose to simply cleanse one individual or an object, it would have been less effort as well, but projecting on that level was anything but simple. She coughed and winced. There were even stronger, more potent lyrics she could recite, but they were technically beyond her comfort and skill to do.

Once she recovered, she found the black murky surroundings had vanished and only an empty city remained. Distantly, she could hear monsters still lurking about, but it was much less of a cacophony. No doubt some of them were made of sickness and fell quality, instead of merely being weird beasts of Xibalba. Additional to the return of normality around her, the once broken highway bridge was now a normal flat asphalt road, no longer elevated. This meant, of course, there was no way to explore the hell mouth the wraith fell into. Not that Bali particularly wanted to venture into such a thing. Maybe the being would show up elsewhere? It was Bali's hope that the human within that Outer Hell had coveted yet remained. Still, there was the matter of the witch. And Bali knew exactly how to find that one.

Following the street, she found the crimson clad witch only a quarter of a mile away, leaning defensively against a pitchfork. Next to her was some kind of... creature, apparently kneeling and wheezing. It was black, with an unclear outline. No light seemed to reflect upon it and few features could be discerned, save vibrant red eyes and horns. Some kind of summoned being, perhaps? She only knew so much about magick.

"What was that?" the witch spoke, her eyes oddly wide and fish-like under her pointed cap.

"A song to purify corrupt things," said Bali, her legs raised like a hackled tarantula. She knew most beings found her more intimidating in this arachne body. The added height certainly helped too. "I see you still remain."

"A song? Wait... you mean, you can actually practice The Song itself?" the witch questioned, sounding caught off guard. "I thought that was a dead art."

Bali stifled a hiss and said nothing at first. Ignoring the rhetoric question, she instead demanded information. "Why did you ask I kill that creature? You said she was precious, no?"

The witch momentarily adopted a pained expression, but it was not from any physical harm. "She is. I did not know you could cleanse her of the foul energies that dragged her here. Had I known... well, I suppose you have my thanks then, Xibalban."

"Bali-la," the Death Clan responded tersely. "I did not do it for you. I was asked to take care of the situation here... with the implication I kill the girl within. I believe I've done the former, but not the latter. Yet, I am not sure where she is."

The witch stared and then she and the black creature exchanged a glance. It coughed lowly and nodded to her. And so, the witch looked back to Bali. "She's alive yet. Do you intend to finish her off?"

Bali glared. "No. I have fought corrupt beings all my life. There is often a victim involved in these things. I just want to know if she is well."

Then, the shadowy beast spoke. "Karolina is between the foulness of Outer Hell and yourself, Death Clan." His voice was guttural and deep, chewing on every word with a wetness in his breath. "You cleansed the town. But you did not finish the job with Karolina."

Bali squinted, puzzled. "Eh? You're certain of this? I don't sense the pressure any more."

"You have not finished the job, 'assassin'," he repeated.

The beast snorted derisively. "Because... she has my beating heart. The force that is Outer Hell dragged me out of my torpor within the stony earth and made her a cursed book of spells with it."

"Because she is the only one who can do what they want. And the only one who can manage the energies of god, woman." He let that sink in. "I am Chernobog... my day of relevance is long past. But the remaining power of who and what I am is not a trifling thing, non-believer."

Xibalbans like her never worshiped gods. It was unheard of amongst them and considered a sign of personal failing, or just a human trait. Gods to them, were merely powerful spirits dependent on worship. And because they were often capricious, Xibalbans knew better than to betray their own to an all powerful thing concerned with a small aspect of the world and a lot of personal indiscretion. At best, a god might be revered, but it was rare.

"What do they want with her and this book made from your heart?"

"Did you see the many faces in the pit, Bali-la?" the witch then asked.

"The corruption wants to make a race of its own to run the land. Xibalbans are too resistant to be possessed and manipulated. And humans of any magical prowess are too few for Outer Hell to seek. But when they found an exception, they could make a leader for themselves. For the corruption is too chaotic and blind in the long run to do much. It needs a driving force. It needs Karolina. Karolina, with the book of Chernobog's heart, brings forth shadow beings made of the foulness of Outer Hell. And that is the point. As long as she remains as she is, she will make more of these... 'geists', we call them. And their touch will scour the land of life such as you and I, by sheer numbers. Their touch is not one that can always be weathered by brute force and toughness. The inflict shadow poisoning and will kill many if left to thrive."

"I was here to reclaim Karolina. But it was outside my ability... I could not bring myself to kill her, one way or another. When you happened along, I figured there was no harm in asking," the witch concluded. Bali noticed she didn't explain any link with the old god, but it seemed unimportant at the time.

Bali took a moment to process everything. She was still puzzled how the Song did not completely cleanse Karolina. Was the darkness that strong in her? The Song was no slight matter... had she performed it wrong? Held back? It had been a while.

"It doesn't matter," advised Chernobog. "You're the only threat she knows of now. She will find you before long. Were I you? I would prepare yourself and finish the job you set out to do, spider woman. I trust your voice is strong enough to sing again soon?"

Bali side glanced. It would take some time.

Chernobog made a wet sickened chuckle. "You will not do this alone. This witch will come with you, with my backing," the black god stated.

Bali wasn't sure how much she trusted the witch. There was much about her she didn't quite know yet and things didn't feel quite right. But as part of a clan of assassins, Bali couldn't back away if the work was unfinished.

She watched the witch step closer, who shared a professional nod with her. "Bali-la, yes? I'm Karolina's aunt and for all purposes, her godmother. My name is Ruukunda Bailey."

It was a name Bali would not hear spoken by another for a long time, until she feigned ignorance when Karolina would later tell her about her distant mentor dressed in red.

"Let's get to work," she announced formally.