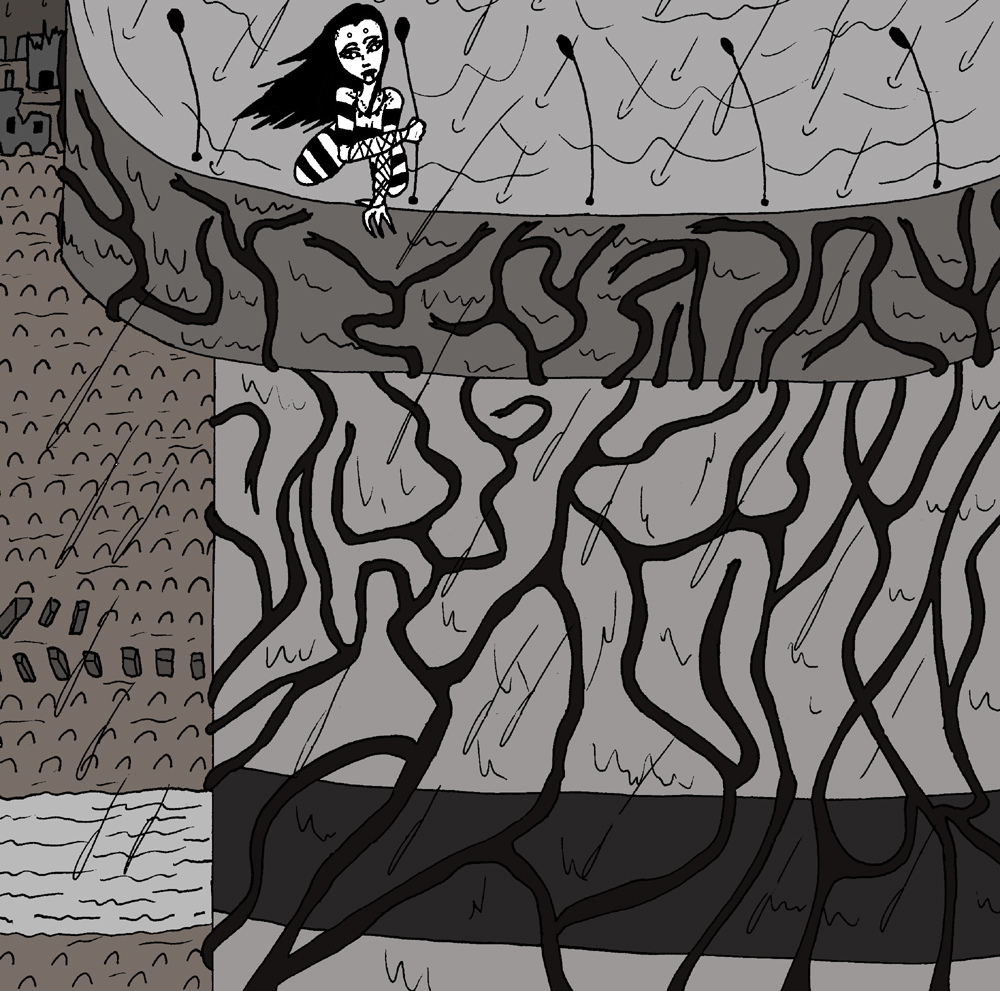 Atop the light house tower, Bali-la observed the unfriendly gale horizon. The weather was terrible, with the wind blowing the ever driving rain into her yellowy back. Her mane of hair whipped to and fro, occasionally blinding her. Still, she did not retreat to the tower's dry interior for protection or comfort. Instead, she crawled casually along the rough concrete landing of the tower's roof. Behind her, the hatch access closed violently, and the fire fed glow from the tower's beacon seemed minimal in such fierocity and shadow. So much so, that she paid it little mind, despite being a curious person and never having seen such a thing up close.

Bali-la was still focused on her earlier suspicion. Something was out there, she felt. Karolina, for all her sudden awkwardness, had done little to dispel that notion. She expected to hear the shovel witch soon behind her, but that was not the case. So in the meantime, Bali carefully made her way across the coarsely worked roof, slick with rain and made her way to the precarious and unguarded edge. It was surrounded loosely with bendable dark objects, which submitted to the direction of the wind. They seemed peculiar, but Bali only gave them a moment of inspection. She knew it not, but they were an invention of some late Adelaide engineer; designed to ward off birds from roosting atop, as the wind driven whipping motion of those curiosities were presumed to scare them off.

Rather heedless of slipping or vertigo, Bali glanced over the stark edge. Tall parasitic creeper vines lined the tower, almost to the top. But she saw nothing that would match the chain-like noise that she heard. So she looked further beyond, as the sound had been admittedly distant in all the ruckus. Far below, she saw hundreds, if not thousands of gravestones and various open plots, the latter filling with cool rain water and mud. Had the shovel witch dug all of these or had they been here long before her efforts? It seemed hard to imagine so many dead individuals in one place. Adelaide must have been well populated in the past, reflected the Xibalban woman.

But soon, she zeroed in on her target, like a falcon eyeing a distant field mouse. There, in a lonely off white mausoleum, came an occasional metal noise, often somewhere between a rattle and a scrape against stone. It seemed unlikely that the wind itself would randomly affect something within a closed structure like that. Still, had the source been silent before? Bali-la's gift of hearing was quite pronounced, but she could recall no such audible disturbance earlier. Coupled with Karolina's umcomfortable reaction moments ago, it suggested that something strange was going on.

It was then that Bali heard the metal hatch open behind her. She hadn't turned to look, but she knew who was there. And from the sound of it, she hadn't fully left the ladder yet. She could feel Miss Bailey staring at the back of her head disapprovingly. "Didn't you say you weren't going to be any trouble? What are you doing over there? Bali, it's not safe up here in a storm... and you're sitting right on the edge! That's just asking to fall off."

"I'm not going to fall," Bali said calmly, studying the crypt house below. "You need not worry about me." She seemed to be ignoring the storm, something that Karolina found almost impossible at the moment, as she struggled to keep the roof hatch open.

"Ergh... this is crazy!" the witch shouted over the howling wind and pattering of the rain on worked cement. "What do you even think you're hearing? I still don't understand how you heard anything outside and below in all this racket! What, do Xibalbans have super powered ears or something?"

"I doubt it," Bali replied, seeming to half pay attention. "But let's not change the topic. What exactly is out there?"

"I, ah, I don't know! Look, would you just get back inside? I'm starting to regret this whole arrangement, to be frank."

Bali dipped her head slightly. "You're not concerned with my safety. There's something you'd prefer not to be known out there, isn't there? You're not being honest with me, Karolina."

"W-what are you talking about?"

Bali finally turned ever so slightly to defiantly peer at the shovel witch. "I won't ask again. Is there anything you want to tell me? I will go down there, with or without you."

Karolina looked crestfallen. She was a far better gravedigger than a deceiver. She knew she couldn't keep this up; the Xibalban was far too suspicious and close to an uncomfortable truth.

"Goddamnit... fine," grumbled Karolina. "I don't get how... but you apparently know. YES, there is..." She tensed up, feeling weak at the thought. "There is 'something' down there. This happens often at night." She sighed.

Bali stayed within the rain, watching the human. "Karolina...? What did you do?"

And then, Karolina seemed to blank out. What anxiety she had, died. What happiness she knew earlier, was forgotten. She was emotionally robotic again. The rain dripped from the pieced style of her hair. "I made a mistake, Bali. Something I couldn't fix. I'm a gravedigger first. And somewhere along the way, I got it into my mind that I was a witch, too."

The Xibalban looked at her host with concern. "Karolina... what are you saying? You didn't-"

"I did," said the shovel witch numbly. "Meet me down below."

Did someone accidentally create the living dead!?!