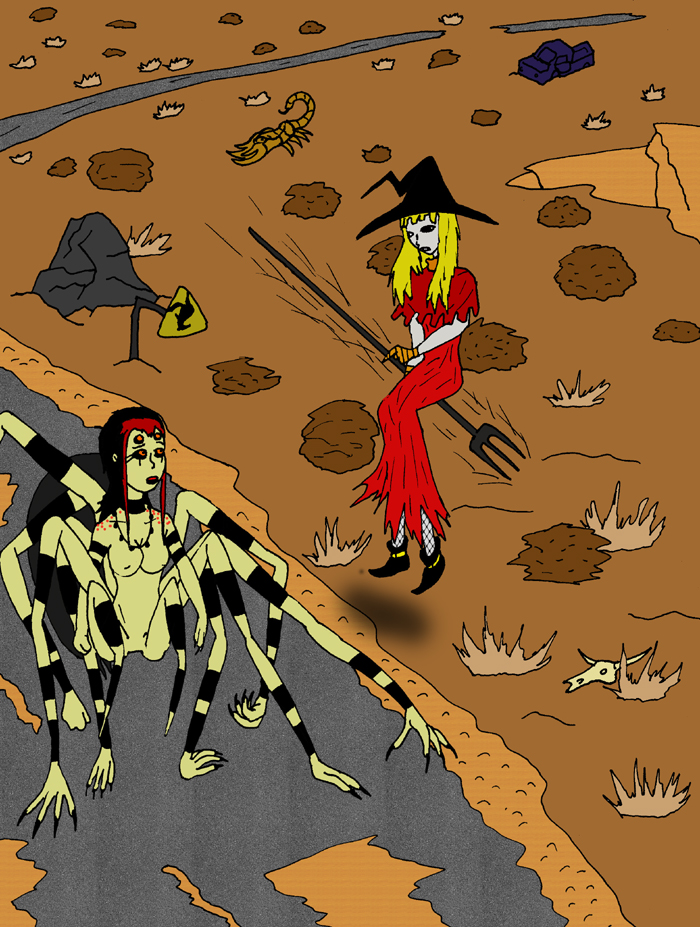 Bali and Ruukunda left the once corrupted city, following an broken asphalt road into the Xibalban outback. Maybe it would be retaken or still attract common monsters, but it was no longer the concern of the day. Only Karolina was.

"Where are we going exactly?" Bali asked, as the witch sat on the haft of a now low flying pitchfork, like some witch's broom of fable. The spider woman was wary of her new associate. And it was not particularly her prerogative to obey some obscure old deity, especially with so much unclear.

"Chernobog said you should prepare yourself. Is it to our benefit to wait for Karolina in the city?" the witch asked rhetorically. "No. It would be wiser to deal with her in the open. Less angles to watch for, of course."

Bali frowned to herself. It was a careless rookie error of judgement not to realize that. "But wait... what if she flies as you do?"

Ruukunda looked off to the side, mulling something over quietly before responding. "Karolina isn't... ready for that yet. She has the spell book, but she hasn't studied it. She probably can't right now. It's just power and ability untapped. Much like her. But if she still has Outer Hell's corruption in her, such strength will still be used."

The witch nodded. "They're shadow zombies of a sort, I suppose. I think Karolina remains as she is because not all of them lingered in the city. I don't know where they are, however. Regardless, as they arose from her, she is tied to them. Since they're scattered, we need to focus on Karolina herself."

"Yes. An aunt and godmother. So am I to believe it's only for sake of family you tried to both save and kill her? Because I don't believe that. And because I don't work for either you or whatever Chernobog has to do with the both of you, you may as well tell me if you expect this to be a partnership."

Ruukunda stared back at Bali with her weirdly large eyes. Bali couldn't read the woman. She seemed detached and cold, as if the task given to her was all there could be. Ruukunda sneered slightly before assuming a more grounded demeanor.

"Fine. If you must know, it goes like this... My sister, Carol, gave birth to Karolina in a village some ways south of here called Adelaide, some nineteen years ago. I was acting midwife and wet nurse for all pretensive purposes. Simply put..." The witch made a pained expression.

"Karolina... she, uh... well, she was stillborn. I was alone in the room with Carol, who couldn't see the child immediately. My sister passed out momentarily from the pain of giving birth. And I felt my heart sink. My sister is a hardworking individual, she's been through a lot. She... mrmph, she deserved better. When she would wake up, she'd find she carried a child for nine months only for 'nothing'."

Bali listened quietly and with full focus, not daring to disturb the story. A stillborn child was a tragedy for anyone, human or Xibalban. Ruukunda no longer seemed professional and business-like.

"In a moment of desperation, before Carol could find out what happened... I conducted a quick ritual. It was one I'd never done before, at least... not like that. Do you know of magick, Bali-la?"

"Enough to respect it. And to be wary of it," said the spider woman. "But I don't know how to read it from a book."

"Maybe that's for the best," sighed Ruukunda. She showed off her wrists and hands, similar to chicken's feet. "Magick is capricious, especially when used in creative ways or in ways not intended. Anyway, I cast a ritual on Karolina. It was intended to revive her. And it did. Carol woke up and found herself with a crying baby girl."

"So you saved her!" Bali said, smiling.

"Yes, but..." Ruukunda searched for the words. "Karolina wasn't really made alive. She was animated."

"I had to jump start her life's spark. I infused her with a summoned shadow being in order to grant her a semblance of life. A forced possession to create a fusion. It was a long shot. But it worked. Karolina was now able to grow up."

"She radiates shadow essence like light from the sun. It doesn't kill her as per shadow poisoning, thank goodness. The ritual's fusion keeps her safe. But it needs an outlet. Karolia is like her mother and father. A good hard working individual with a limited sense of adventure. But because of the building energy in her... well, magic is an ambitious thing. It doesn't like to sit still usually. And shadow essence is the energy of potential. So it needs an outlet."

"My sister and her husband are common as day, with no instinct for magic at all. I'm the exception. And now, Karolina is, too. Unfortunately, the Bailey's are a family of gravediggers. And Karolina's been absorbing latent influences from that work. She's a walking brew pot for things like Geists you saw, but she needed a push to make it happen. I could see the writing on the wall and I wanted to prevent that. Now, I tried to instill her with a more controlled outlet for her energies with a spellbook, in hopes that she would make use of it productively to lower her internal shadow essence from overflowing. Spellcasting in this way is a disciplined path."

"Karolina lived with her mother and father in Adelaide meanwhile. I don't live there. But word came to me that Karolina vanished from them one day and then the disaster in the other village happened. I believe Outer Hell called to Karolina through the shadows within her and well..."

"Outer Hell killed the village and abducted her-" Bali began to say, but Ruukunda raised a hand and shook her head.

"If only. No, Karolina... she exploded. Magically speaking. Karolina killed the entire village."

"Wait, what? How?" Bali asked, freezing in place for a moment.

"Outer Hell might have compelled her to do it for all I can tell," the witch said, speaking ruefully. "But Karolina's shadow essence isn't something that stabilizes within her, unlike regular creatures with shadow essence. So, she detonated and infected the entire town with a fatal dose of shadow poisoning. And those people became the geists that emerged from Karolina in Outer Hell. Karolina is nothing short of a magical walking bomb. I don't think she knew what she was doing, frankly. And I think she would have been fine if not for Outer Hell searching her out. But the only reason you or I are even alive at all is because she unleashed that much energy before we found her. That's why I reluctantly asked you to kill her at the time. Because we might not get another chance when she comes back."

Bali swallowed hard. This was insane.

"You have the Song. I need you to purge Karolina again- get all that remaining influence out of her. If we can't? Then... we have to put her down. But I doubt want to do that if I can help it. And I suspect, neither do you, for some reason."

"I don't take great pleasure in killing... it's... not who I am," Bali stated, rubbing the nape of her neck. "And your tale makes me feel bad for her... she's done terrible things, but if she isn't doing this of her own choice, then yes, I should do whatever I can to save her and stop this."

"But what about Chernobog? He said before that Outer Hell took him from below the earth and made his heart into a spellbook for her. How does he figure into this?"

"Chernobog is a source for invocation for spell casters such as Karolina and myself. When he shares his magical arts, it allows him to survive in an age where none would worship him, such as this eon. He was once a dark slavic god, but without humanity, he's a pale shade of himself. In any event, his heart was synchronized into the spell book I had already given her. I would have introduced him to her as a patron of her magic eventually, but Karolina was not as studious as I had assumed she'd be. If she followed through, she might have found a way in just her normal spell book to stabilize herself. Spells are personalized and everyone's book is unique to them. They tend to work off of what the person is and perhaps what they need, at least to some degree."

"With the gods heart tied to her spell book, Karolina may be enabled to unleash incredible spells and unheard of energies if Outer Hell can get her to train with it. Right now, she has been too beast-like, too out of her mind. But it's only a matter of time. I'm with you now in case Karolina becomes proficient with the book, from the time we just saw her to whenever we meet with her again. I should be able to distract or deflect some of her spells, which will give you a chance to use your Song. Or... well, you know."

Bali furrowed her brow. If she had any intent of fleeing the situation, it was certainly futile now. And more unfortunately, it would be a while before she could cleanse with the Song again. It was too demanding to do often, let alone at full strength during a battle.

She knew this meant Karolina might not be someone she could save.