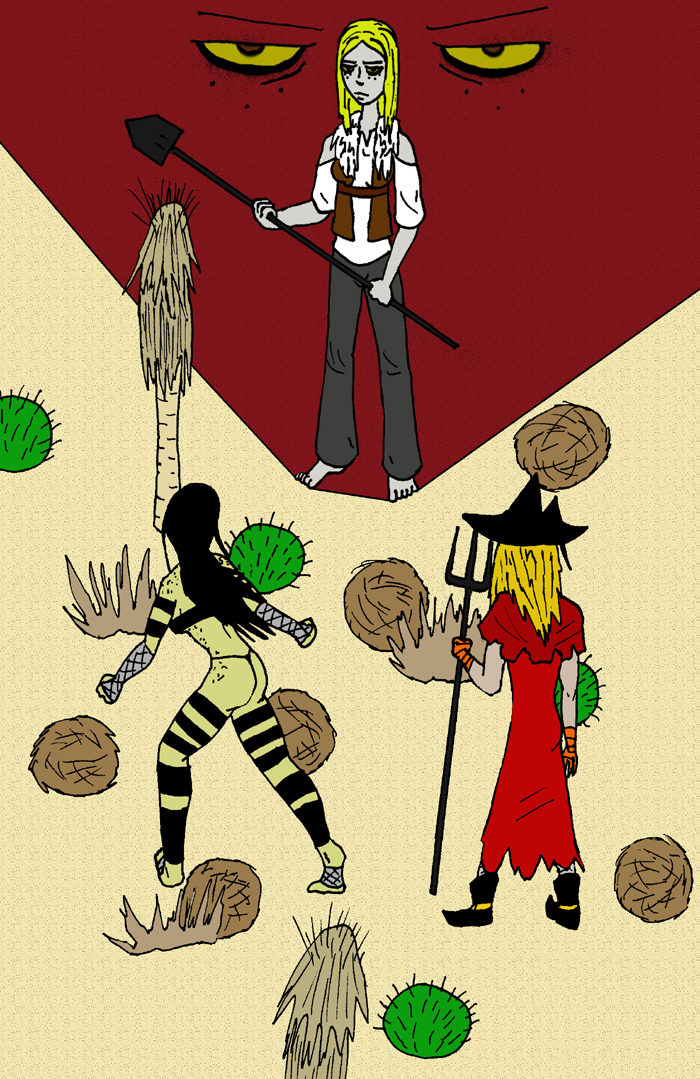 A couple days passed, as the witch and the barbarian waited for Karolina's return within the expanse of Australia's Outback, surrounded by vast fields of dust, cacti, and small earth toned shrubs. The Death Clan woman was still skeptical that Karolina would innately find her, but Ruukunda merely asked her to be patient.

Bali had resumed her humanoid guise now. The arachne body was strong, but it wasn't well suited to her own sense of agility, as she couldn't incorporate her dance fighting skills with it. She also removed her courtesan's garb to her more commonly worn skimpy outdoor wear. Ruukunda shot her a disapproving glance, being much more covered up, comparatively. Most humans preferred to disguise their bodies with clothes, Bali had been told, whereas her kind preferred showing off their physiques or at least having higher mobility. Otherwise, they might wear clothes taken from others beaten in challenges and fights, as proof of a trophy. Such things were done out of pride of prowess. Of course, as a fae blooded shapeshifter, Bali would cosmetically form her attire, as was typical.

It was another hot dry day in the Outback. The waiting and maintaining a sense of needing to be ready was draining in and of itself. Ruukunda was odd company. Sometimes she would talk at length if the subject was either about magick or Karolina herself. Often, she was very clipped in her speech and disinterested in conversation. Bali found her to be overly self controlled as a whole. Too professional and detached to make a friend from her, she thought of the witch.

But it was on this day that Karolina finally appeared. And by that, she actually seemed to come out of thin air all of the sudden. Bali detected nothing of an approach, only the feeling of eyes burning into her. She pivoted around, along with Ruukunda who picked up on the presence. Standing nonchalantly, Karolina stared at them with a dead pan expression and sunken yellowy eyes, no doubt a mark of Outer Hell's influence. She was dressed in dark pants, shoe-less, with a buckskin vest and a long white shirt. Around her waist, a belt was tied tightly to her form. And in her hands, her tell tale long digging shovel. It was not an impressive appearance, as she looked rather ordinary, but the gravedigger's daughter had a stifling presence around, as if the air was dissipating in her wake.

Expecting an attack, the Death Clan barbarian assumed a martial pose. In her mind, she wondered why it seemed the Song didn't work as well as she thought on Karolina. The dark influence was still within her, clearly. Was she losing her gift of music and melody?

"Before this comes to blood, which I see you're expecting... you must be wondering the obvious. Eh, Death Clan?" Karolina said quite plainly. "Why? Why is she still doing this?"

Bali tensed. Was she reading her mind? No, this was Outer Hell speaking for her. It certainly knew of what the Song was now.

Karolina hinted at a small smirk, before seeming bored. "What if I told you it did work?"

"You did me a favor, Xibalban. Saved me quite a bit of time and considerable effort, really. I suppose I should thank you. But I doubt you'd accept my gratitude graciously."

Ruukunda interjected. "You need to leave her now," commanded the witch to her niece, but she was really talking to Outer Hell's hold on her. "All this talk doesn't change the fact you must be quite weakened within her-"

"Let me just stop you there, auntie," Karolina said, raising an open palm. "You don't get it. Neither of you do, it seems. So, I'm going to walk you through this."

Ruukunda and Bali shared a confused glance, but remained wary.

"The Song, as I understand it to be called, did work. Such an interesting force, really. I never knew it existed. It scoured the corruption from me. All the possessing forces. So, you've come here to save a girl from the great gloom of Xibalba and... what? Return her where?"

"To a live of supreme drudgery? Digging holes for the deceased? Living a life within a small boxed in town, filled with paranoia and xenophobia of anything beyond it's own meager borders? Or, perhaps a life of studying endless to some inscrutable end so I could end up like you, auntie?"

The witch shivered. "Wait... Karolina? Why are you talking like this? Am I supposed to believe Outer Hell has no hold on you?"

Karolina smiled with dull amusement. "And the last horse crosses the finish line, eh? Auntie, auntie... my life was a boring hell. There is no future in Adelaide. Digging ditches for the rest of eternity? Cowering behind the defense of equally nervous guards while Xibalbans roam the land like gods? Devoting myself to the long nights of studying how to do magic tricks? What kind of spells would someone boring like me even learn? You said it yourself once... the spells within a book are based on the nature of one's character. And what did I learn? The ability to summon my spade and make it stronger so it wouldn't break under pressure easily? What kind of garbage magick is that?"

"No, no no..." Karolina threw back her head, flipping back her hair. "I wanted that power. What you call Outer Hell beckoned to me... begged me. It was leaderless and chaotic. It needed a vessel to go onward. It promised me the one thing I couldn't get on my own. Freedom. Freedom to leave Adelaide, to wander on my own. These past nineteen years have been a waking prison. My parents are fine people, but they're boring and unable to change. Stifling. And you're no different, auntie. For all your magick, you're as rigid as they are. I don't know why you wanted to take me under your wing, frankly. But I needed to escape the curse of being a Bailey. Of being... ordinary. And here we are."

"I should clarify something... I don't hate you, auntie. You're just doing what comes natural to being a Bailey. Of being a human in this world of monsters. I don't really hate any of you, I think. But if I see an obstacle, I will break it. I will not go back to that mediocrity that has been my life. When I stood, surrounded by the geists of that village that I... well, I knew what I had caused. Even before Outer Hell, there was something peculiar within this ordinary mask that is who I've been. And I knew that I was destined for greater things than being a studious bookworm and digging holes for the family business."

"Outer Hell was a means to an end... nothing more. How fortunate the Death Clan removed it. Now, the power is mine alone. Is it really corruption when it was solely my goal to begin with? The geists I have made of the dead need no burial plots. They listen without the rote and ritual of spells. The voices of Outer Hell were strong, yet ironically feeble of character. I am not. So I give you this warning. Get in my way again and I'll show you what one boring little human can do. I will not give up my freedom ever again."

"I am Kara. And this country will be my personal playground. The geists will drive all unnecessary challengers from the land. Those who haven't the sake to leave, will join their numbers. And they will listen only to me now."

Time seemed to slow to a crawl for Bali-la. This was insane. Her entire assignment had spiraled out of control. The Song... might have actually made things worse. She could hear Ruukunda screaming her head off at Karolina in frustration and disappointment, but she couldn't understand the words. How could someone even save someone like this? Karolina was not some hapless girl, used as a tool... she was ambitious, power hungry, and malevolent. She showed no shame in slaughtering an entire village or consorting with a dangerous evil force. And people were just obstacles to her? It was such a foreign viewpoint to the spider woman. Maybe... maybe she should have simply killed her in the city, if it was possible. Her clan implied that was what was desired. Ruukunda even suggested it as an option. Now, the girl was a megalomaniac and her heart was filled with thorns.

"What am I even doing...?" Bali mumbled to herself. Reckless. Always reckless, her kind would say. She couldn't fix the past. She couldn't save anyone.

This had to be dealt with. 'Kara' had to be confronted. Left to her own devices, she would no doubt be a great menace if the Xibalban walked away now. But there was no Song to sing. Her throat was no anywhere near ready yet. And since it appeared that Kara wasn't corrupt to begin with, the Song would do little again. The idea of someone with such pure disregard for everyone else, willing to condemn everyone to a slave's existence as whatever the geists were...

"Pardon?" Karolina and the witch looked at her.

"We're doing this now. Or however long it's going to take. If I ignore you now, this will be no different than ignoring the mere spark that ignites a forest fire," hissed Bali.

Karolina raised a brow. "Is that so? Then the decision has been made. Auntie, what about you? Going to die with this bush woman?"

Ruukunda stared darkly. After a moment of hesitation, she sighed. "This has been my fault from the beginning, it seems. I played god with you to make my sister happy. And to give you a chance. And this is what you've done with it..."

"What are you talking about?" Karolina didn't follow her meaning, not knowing of her complications at birth.

"I don't want to do this. But I will do what needs to be done. I brought you into this world as much as my sister Carol did. My mistake."

Karolina slimmed her eyes. The facts behind those words escaped her. But the tone did not.

"Well then. I guess I'll be spared the monotony of your funeral, because you two just dug your own graves," snarled Karolina with displeasure. "Remember. You chose this!"