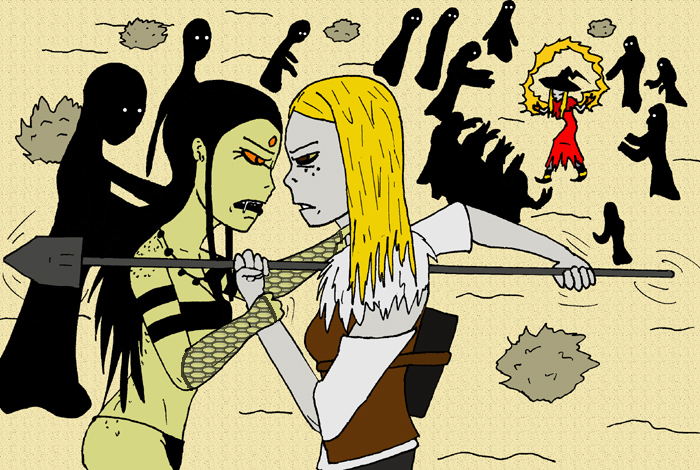 So began the first of a series of battles with Kara. Able to choose where and when to appear, she would launch into Bali and Ruukunda with a troupe of geists, who acted solely at her beck and call. At this time, the geists were crudely formed lumps of darkness with white specked eyes. They weren't particularly fast or dangerous, just numerous. Typically, Ruukunda would confront them with magic, logically arguing that sorcery was safer than hand to hand with the things. This left Bali free to bring the fight directly to Kara herself.

At the time, Kara wasn't terribly impressive either. Although she carried her spellbook strapped to her back, she largely ignored it, relying instead on improvised powers given to her by essence of Outer Hell and whatever pain she could inflict with her shovel. Unfortunately for her, she was Bali-la's inferior in hand to hand. Bali was not only stronger, but faster, and well trained in hand to hand. Easily able to lock up Kara's attacks with the spade, the spider woman laid into Kara with punches, kicks, and chokes. The goal was not to kill Kara, necessarily, but to see if that frightened humanized face would return. Bali believed that expression, such as she saw with when Kara was the wraith, was the true person behind the power. If Kara could be snapped out of the influence of her powers, such as they were, perhaps she could be saved.

But it was foolish. And fitting Bali's reputation, reckless.

No matter how many times she battled Kara, while the witchling would seem to revert to a less megalomaniacal person at the end of her stamina, she would simply vanish away. And from there, she would appear some days later, ready to fight again. This went on over and over, much to Ruukunda's growing irritation with Bali. "She can't be saved! Come on...!" Yet, Ruukunda herself would not volunteer to land the killing blow either.

Worse, the geists were beginning to take a more humanoid shape than the dark amorphous lumps they were before. They grew claws and teeth and seemed to fight more like a pack of wolves than with true mindlessness. While this was still within the ability of the two women to handle, Kara herself was growing stronger too. And with this, the temporary bond between Bali and Ruukunda frayed more.

Ruukunda came to understand that Bali couldn't use the Song again as she did in Outer Hell proper. It took a great deal of time to recover to that level of strength, leaving Bali only able to sing and hum to less than useful effects as far as combat was concerned.

The attacks went on for several weeks, which wore on the witch and the Death Clan woman. Kara was dead set on stopping them, and the fights seemed only to strengthen her resolve. Surely, she could have simply left the area altogether, but no, she wouldn't let what challenge the two presented go. There was no reasoning with her either. She looked at them as an obstacle that had to be dealt with, if for pride's sake, before she could do anything else with her abilities.

It was only a matter of time, between the constant fights and the inability to stop Kara fully, before the situation truly turned against the duo at last for their hesitation. Kara learned all too well how to fight them now and she was growing increasingly dangerous. And she could see the tension between Bali and the witch's ineffectual team up. Understanding several particulars about the situation, Kara decided it was time to drive them apart, crushing more than their bodies. No, now she would crush their spirits. Just what Bali had foolishly tried to do to make her stop the madness.