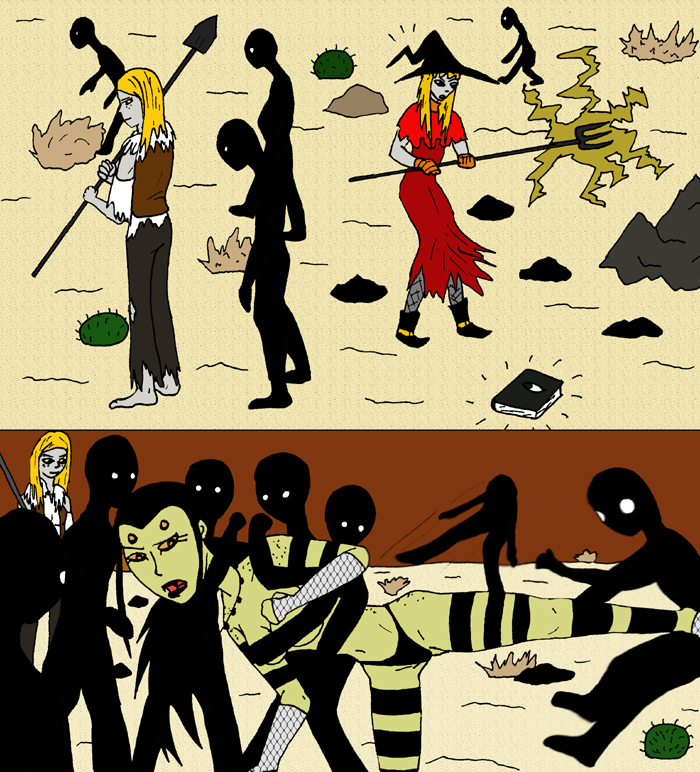 Each fight, Kara came back not only stronger, but wiser as well. Not only of her enemies, but of her power, and what knowledge the memories of Outer Hell had possessed. They were often difficult to read, as they flowed through her in a taste that was both alien and self distracted. It was little doubt she wasn't much of a match for her aunt or Bali. But now, she was getting the hang of it. The geists had achieved humanoid forms now, although they were thin and mute of voice. But they moved faster and she could command more of them at a time as well.

In the days that passed, Kara discovered the godly identity within her book as well. This Chernobog... he was a weak Scandinavian god, something obscure even from his own time. While he survived on the crumbs of being acknowledged by some witches, such as Ruukunda, Kara had no need of him. Instead of finding the dark god menacing, she considered him a mewling blow hard, unable to do much on his own beyond the teaching of magic. She did not need him, but what power she could derive from his essence within the book was still of interest. Absorbing it through sheer force of her own magical might, she needed nothing of his identity, which was his heart infused into the book. So, she left it there, realizing it might make for a useful tool still. For what isn't valuable to one, is treasure to another.

With that in mind, it was time to rid herself of the two meddlers. Noticing neither was technically willing to kill her, and seeing their strife together, she appeared one day before them in what seemed like a usual provocation on her part. Making use of her now much more numerous geists, Kara placed the book down on the dusty turf of the land as the battle ensued, acting as if it was a hassle to carry. Forcing Bali and Ruukunda to handle geists on their own, made easier by their apparent disharmony, she subtly lured Ruukunda closer to her book and pretended not to notice.

Originally, the plan was to kill her aunt, but since they weren't trying to kill her, why was the older witch still here? Reasoning it was less for Kara's sake, but for the book and Chernobog now, the bait was left wide open. And the older witch wasted no time in gathering it up greedily, upon noticing it seemingly forgotten. For if she could not save her niece, honoring Chernobog with his missing heart would surely earn her favor. And so, Kara granted this, pretending to let her have a victory with something seemingly valuable. And how better to protect that new asset than to retreat with it?

Ruukunda made a token effort to alert Bali that was leaving the scene with 'something important', but the spider woman was being besieged heavily with almost three times as many geists as usual now. Ruukunda had been lured to the book, in fact, by a small light presence of geists that could be easily dispatched. And since the witch didn't want to risk losing the spell book again, she ran regardless of what Bali did, although she likely assumed the Death Clan tribeswoman would escape as well. Kara's plan was now to seal that trap.

Overwhelming the weary dancing martial art's practitioner, Kara had the geists swarm and grapple Bali. The spider woman was definitely stronger and a better fighter than any of them, but there is only so much one can do against ants.

"Ruukunda? Where are you?! I need a hand here!" Bali-la shouted, not having heard Ruukunda's earlier call, nor having noticed her departure in the chaos. But there was no assistance to be had.

Kara rationalized that Ruukunda wouldn't kill a blood relative after all the hesitation, although Kara still didn't know the magnitude of Ruukunda's actual role in her life beyond pushing magic on her. So with her apparent victory in hand, perhaps assuming Kara would weaken without the book, Bali became isolated and suffered a real defeat, dragged low by the shadowy humanoids. No man or woman is a mountain.

Bali was the real threat. She was not a blood relation and might easily kill Kara if she really tried. Kara knew Bali could have done it already, but she seemed to hold back. Which was odd, because Outer Hell's memories indicated Xibalbans were very blood thirsty. But they also could be beaten down, to have their spirits broken enough to realize they were outclassed. All in all, she couldn't fathom why Bali kept bothering with her, as she hesitated to deliver a killing blow each time before Kara could escape. Maybe it was that lapse in mental strength Kara knew she would suffer... a strange inner pang of guilt when she too, was brow beaten by the spider woman. But her powers would warp her away and the entire skirmishing relationship would begin again anew in days, each time.

"I could kill you, I'm sure. But you've spared me many times," asked Kara, when the Death Clan woman was finally restrained long enough by the sheer amount of geists. "Why, I wonder?"

Bali gazed at her with intense orange eyes, a sign of the fae and a Xibalban morning. "Because I know there is someone in there who can be saved. Maybe you're not being controlled by anything now. And maybe you wanted this power you've taken. I've seen it in your eyes. Surely, you know it's there. You know what you're doing and what you've done is wrong. Unnatural even. Yes, I don't want to kill you. I want to help. I'm sure I can-"

"The voice of the power within, now at my behest, tells me what you did in the city was unique. An old gift that can cleanse the world with a song." Kara responded, pacing about idly. "I respect that you want to 'save me'. From what, I don't care. But you're not as I understand or have ever understood Xibalbans to be. So, I won't kill you either. Really, without you and Ruukunda, I wouldn't have the immediate opportunity to sharpen my proverbial sword... these powers, of course. So, you have my thanks. But I can't have you or Ruukunda getting in my way anymore. I've out grown you both, I suppose."

"I'm going to leave you with something... well, not in such exact words, actually... that will make sure you never forget the day you realized you could have ended all of this by simply doing what your animal brain would naturally tell you to do. Your gift could be a threat to me in the future- I'm fairly certain these geists would be considered corruptions. What benefit is there to having an army if one person can simply scream them away? I need human spirits to make these and there's only so many left, of course. We humans are a dying breed."

"So forgive me if I don't care about what Xibalban Australia considers 'natural'. You certainly don't. A spider woman who won't kill? Psh. I wonder if that's like a human accepting that she's a mediocre nothing with no chance on her own in this world? Yes, we change our fates, don't we? Hypocrite."

"If you can't bring yourself to kill me, then don't cry to me when I take the one thing you can't give."

The geists held a struggling Bali down. She thrashed and hissed, but there was too many to fight off. Kara walked closer, smiled, and then sliced her own hand open with the dragging sharp tip of her burial spade. She scarcely winced.

"I know something else about your kind, orange eyes. I understand the fae like yourself only feed on shadow essence? How interesting. I hear there's a lot of shadow essence in me, to be honest. But today, I think we're going to try the other side of things, Bali."

"Now DRINK," she demanded, squeezing her own hand. Bali's mouth was forced open by the geists and Kara's blood began to flow onto her tongue and throat. Bali gagged and coughed, trying to reject it, yet...

Have a good break!

Thanks! I hope to!