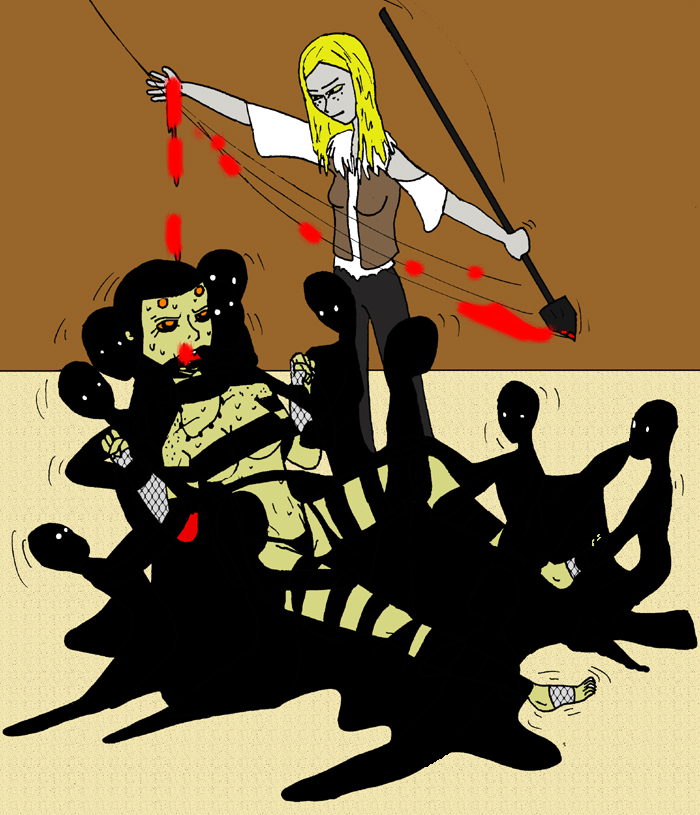 Swarmed by the ooze-like mass of multiple geists and held in place, Bali was forced to guzzle more and more blood. She unintelligibly shrieked and hissed, thrashing like a maddened creature, as her eyes dilated and threatened, only half focusing on the witch tormenting her. Karolina gashed her own hand to spill out more of her life's blood into Bali's mouth, held open by the mitten shaped hands of the geists. "Yes, you're not much more than an animal on two legs when it comes down to it, aren't you? Look at you! To think I had something to be afraid of..."

"I can see this is having an effect. What does happen, I wonder? Because I think I have an idea."

"This is what power is, when used with cleverness, Bali. It's what Outer Hell was never capable of. Ingenuity and the ability to adapt. It needed a leader. But beyond it's strength, I didn't need it. And to think, you helped me along! I don't need anyone now, do you understand? No one. I don't know why you're so dogged on coming after me, but it only took a matter of time to figure out how I could separate you and Ruukunda. It was easy to prey on your individual flaws; the both of you."

"Now, I could have killed you, but I prefer to make an example of you going forward. It's so much worse for a Xibalban, from what I've gathered thanks to my new powers, to unable to recover from something no matter how strong their will to survive is. I could chop you to pieces and as long as you were stubborn enough and left to survive even slightly, I'd see you running at me again in months, I imagine."

"So remember this day, spider woman. The day I corrupted that delicate balance of shadow and blood essence within you. And the day I took your unique gift and cast it to the dust."

Cruel, the shovel witch had the geists release Bali, inflicting her with shadow poisoning from their sustained touch, but also contaminating the form of energy she'd require by feeding her significant amounts of blood, which was not something the fae like herself could engage in.

Bali fell backwards after a delirious attempt to stand and began to thrash, cough, and foam at the lips. Her insides were going haywire, wracked with pain, and her mind raced feverishly. She couldn't focus and she could scarcely think a coherent thought.

Bali had been corrupted.

Kara smirked, watching her nemesis reduced to a sickened wretched state. "Sing if you can, little bird. But your days of the Song are over now. The sounds will not part from your lips any further."

Humming to herself, Karolina turned and walked away, dismissing her geists as easily as she did her enemies, while Bali screamed to the fading sun and uncaring sand, rabid, confused, and maimed.