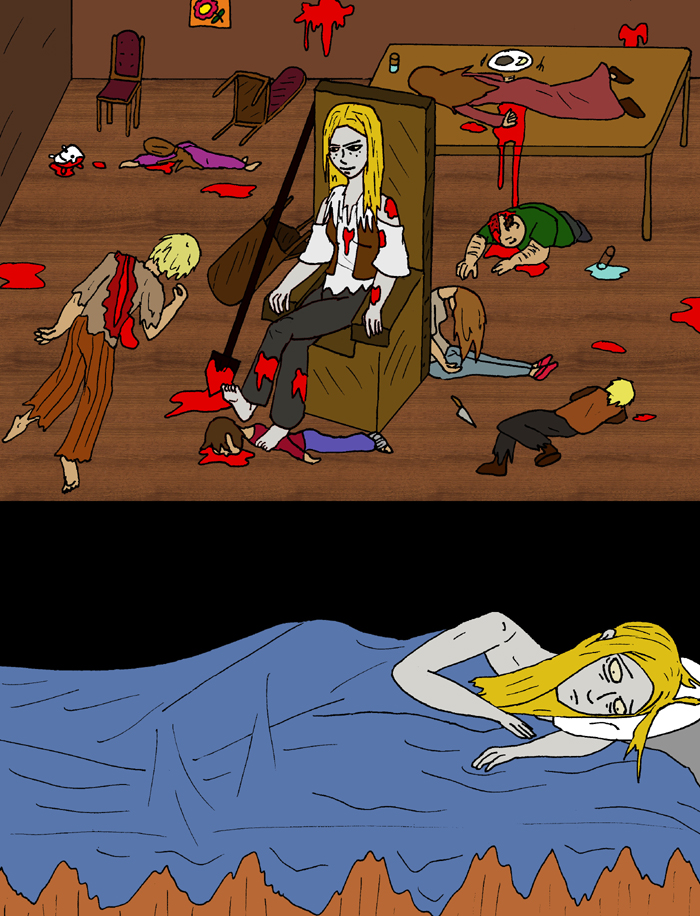 Several days after her decisive victory over Bali, Kara had returned to the wilds, done with the spider woman. She was intent on heading back to Adelaide, if just to show off what she was capable of now. Wouldn't those dullards be impressed, she thought! But, Kara was not capable of blood sensing at this point in her life, meaning she couldn't sense directions cohesively in Xibalba's ever changing landscape. Sadly, the powers of Outer Hell were surprisingly useless in regards to navigation. And her ability to teleport was in fact limited to relatively short distances. There was no way she could simply pop over to Adelaide magically. But no matter. She would find it eventually.

However, she felt conflicted about the idea of returning to Adelaide. She was not the quiet obedient daughter her parents raised. She had the power of a foreign entity at her disposal! Why pretend she was still some simple ditch digger? Still, this was not her problem. Her main notion of discomfort was something else inside of her. A compulsion. One that wanted her to turn any human she came across into another geist servant.

How many geists would be enough before she felt safe around others? Before she couldn't be questioned by anyone? Maybe... maybe one good sized settlement would do it. But not Adelaide. They were boring, but surely mom and dad didn't deserve to be converted to geists. Right? It felt weird. Uncomfortable. She wanted power. To be in charge of her own destiny and freedom. But not if it involved hurting them.

She twitched. She was practically putting people to the stake by shadow poisoning them and making them her mindless shadow servants. Having a conscience felt strange. Out of place. Inconvenient and unwanted, even.

That night, hungry and tired from miles of traveling, she came upon a cabin in the middle of the wilds. Humans! She could hear their voices inside, talking, clamoring... again, she twitched. She used to eat dinner with her parents. She... didn't really hate them. They were just limited. But she liked the time not spent digging away for hours under a hot sun with them. She wished they weren't so busy all the time and that neither was she. She remembered wishing she could just spend time with them. It wasn't that they were unloving, but they were heavily routine in their ways. Almost robotic in their devotion to work for the town. Sometimes she felt like she was just baggage or another hired hand.

"Maybe this is a good test for me," she said to herself. "If I can restrain the compulsion here, then surely I can visit Adelaide without turning everyone into geists. Yes, that's it." Such words served to attempt to convince herself and no one else. She dismissed her existing geists to lay low and not bother her for a time, she didn't care where. And so, Kara walked up and knocked on the door, seeking lodging for the night.

A kindly family of several people, dressed poor and raggedly, answered. She and the family exchange greetings. And with little fuss, the shovel witch was given entrance, food, and comfort. They hadn't seen another human in years, this little house in the wilds. And as such, they were happy to meet her.

It was warm and welcoming. Karolina sat with them for dinner, ate food, and shared stories, albeit embellished or not exactly true in order to keep her cover. They spent long hours conversing. And Karolina enjoyed their company, feeling nostalgic after all the eldritch weirdness that had happened lately.

But it couldn't last, apparently.

She wasn't sure of the why or when, but she grew bored of them. All of this was an act. Training. Indulgence in the simplest of things. Her responses to them were slipping, growing short and curt. So it when it had become several hours, they family began to sing songs together to entertain their guest, sensing her displeasure.

She wasn't sure quite what it was. Maybe it was because this warm happy environment was what she wanted, but felt removed and sickened by all at once. Maybe because she looked at them as 'humans' and not people, in that they were less or beneath her now. Or maybe it was the singing itself which reminded her of the damned spider woman. And for whatever reason, she couldn't remember anymore why she tolerated any of this. Something else seemed a lot more fun. And there would be no eyes that knew her to judge.

Ten minutes later, each and every one of them was dead, laying on the floor, kitchen table, or otherwise. She used no magic. She simply grabbed her shovel. And hacked them apart. The uncle. The parents. The several children. All dead. And she hadn't turned them to geists either. It was killing without reason beyond the enjoyment of doing so. Because she could. It felt terribly frightening, but liberating. The act of arbitrarily sending others into the darkness of death made her heart beat fast.

She sat in the main chair, planting her feet on a dead child's corpse, surveying her work. There was blood everywhere. And she wouldn't even bury them. That too, was beneath her. "What? No songs now?" she jested cruelly to the empty house, filled with the slain.

And like a twisted Goldilocks who murders the bears, she later rested in the master bed of this family. Freedom. Complete freedom, she told herself. To do anything, anywhere, to anyone.

But as she lay there, sleep did not come. It slowly dawned on her that what just happened was not a conscious decision in the way she knew it. It was autonomous and pointless. It made no sense. Why did she kill them?

At least before, she had claimed that making others into geists gave her power and freedom to do as she wished. But these people were harmless. And she did not turn them into geists.

Her eyes widened as she lay in the darkness, realizing herself as a scared fool, the kind Bali had seen at the conclusion of their fights. But Karolina hadn't realized it, for all her bluster.

She was not in control of herself. Outer Hell was. Earlier, she spoke words that were not truly of her own making. She was nothing more than their loud mouthed puppet, convincing herself of bullshit to do what the strange internal compulsion wanted. One could not absorb corruption as she had without becoming corrupt herself.

She was out of control. And frightened. What was she becoming that she allowed herself to think she wanted to just mindlessly butcher some people like that? She didn't know what to do now. She couldn't use the power she stole to fight it- it was an internal corruption, growing stronger within her. And she had driven off the only people who had any inclination to help her. If she had only realized this in time!
How did she even get the idea to destroy Bali's gift? Because the power inside her told her so. She was the shield and protective suit for the residual corruption of Outer Hell. As long as she guarded it, it wouldn't leave. And Bali's voice was the only threat it knew. So, she had been compelled to fight the spider woman as she had. Now, only she was left to be devoured inside by this power, no, 'parasite' that she thought was her own. Even this desire to go back to Adelaide... was it even hers? Would she snap and murder the entire town?