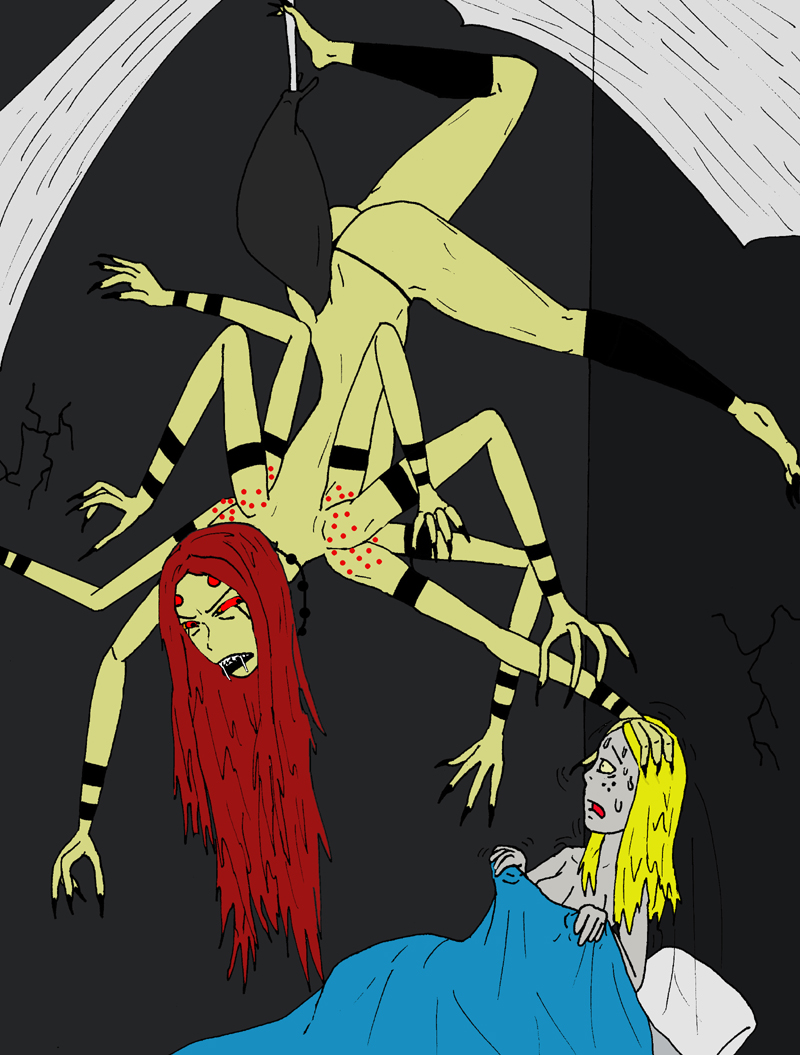 "It's a little late to be asking that now," came a snarl from above. Kara twitched and looked above in the gloomy room. Glaring, much larger, and multi limbed, a more monstrous Bali-la descended from the ceiling. It was the corrupted form she hated that she would later employ when fighting the alligator men. Kara, however, was horrified to see it now. Bali had black nails, red eyes, and was at least a foot taller. And she eyed the witch with a hatred that she hadn't expressed in all their fighting thus far.

"H-how long where you up there?? I never heard you come in," Kara exclaimed, shaking. "I never even saw you-"

"I'm from a clan of assassins, Kara. I would think that with all Outer Hell told you about, that much would be obvious. But then again, you did leave me alive, if just to rot in the desert. You little idiot... I could have killed you at any time. I was trying to reach you. I pulled all of my punches with you. I could see that scared person who eyed me with fear, only to teleport away. You were played by your own power from the start."

"I-" Kara began, feeling Bali's now large palm suddenly grab her skull, with the nail of a thumb held in front of her vision.

"I will say this only once. Speak a spell, look away, go for your little shovel, call the geists, or twiddle your fingers even slightly- you'll be dead on the spot. I am done playing with you. Do you understand me? Nod if you do."

Kara shivered further, and nodded. Bali could see her fear was pronounced. More than usual. Tears formed in Karolina's eyes. Bali could see guilt, panic, and deep terror. And it wasn't all from the spider woman.

"You stole something irreplaceable from me, Kara. The Song is gone from my throat, save for the softest melody. I trained long and hard for that. Changed who I was. And now... now you've crippled me. I can't even assume my normal body anymore. This form isn't mine. It's a mockery of what you've inflicted upon me. This isn't something I or anyone else can truly recover from. And you just took it away for... what, exactly? Hmm? Teach me a lesson? To let me suffer? Oh Kara... it took all my will to drag myself out of that desert with my insides sick and warped. And it was you who kept me going. Just so I could find you..."

"This is what I get for helping you. I ignored the words of my people who implied I should deal with the problem that was Outer Hell and subsequently, you. I ignored your aunt, when she recommended I kill you, when she lacked the heart. I took mercy upon you. I wanted to save you. And you... you left me maimed and bereft of an ancient gift... congratulations you little bitch- the Song is gone from this world. I was the last carrier of it. I can't even teach it to anyone else now. To think, I survived after all this time... just to have you wrench it from my throat and laugh it off. You've ruined my life. And while you know it not, you've ruined others I could have saved with it. Now, I'm stranded here in this day and age. Alone. Because of a sniveling megalomaniacal coward. You have no idea what you've done. At all."

"In that desert, I thought only of inflicting untold suffering upon you, Kara. Acts that would be legendary in whispers," Bali hissed, baring her large fangs. "You have pushed me far beyond any reasonable argument that I shouldn't feed you your own skin, piece by piece, torn off with these abominate hands."

Kara could only whimper and cry, terrified and possessed of the knowledge of how universally doomed she was, either from Outer Hell or from Bali's wrath.

Bali lifted Kara out of bed, climbing towards the ceiling with the half dressed girl. "I saw what you did to that family. Not even worth being geists, eh? Just a worthless killer, Kara..."

"I suppose that makes it all better. Oh... no. No, it doesn't," Bali hissed, bringing her close. Kara could see the blood thirst in the angry Xibalban.

Bali studied the weeping human with hardly controlled seething rage. Every instinct told her to kill the human.

"Just... make it end. I can't handle this world. Humans... we don't stand a chance anymore," sniffled Karolina. "And the one time-! The one time I tried to rise above it... I made everything worse. I... I'm so sorry. I fucked up everything..."

Bali continued to glare, seemingly unmoved, but at least listening. Somewhere, behind those human eyes, the entity that was Outer Hell remained bemused. But Bali knew without Kara, it was nothing but a static corruptive force. A rudderless, leaderless monstrosity. A parasite. It needed Kara. And without her, it too, would die now.

"I gave it a lot of thought... what I would ultimately do when I found you," said Bali now sounding more removed than angry. "Death is a release, Kara. You haven't earned it. You don't get to run away from this. Not this time. So, what if I could stop all of this?"

"Another chance, Kara. To be free of this rampant mania you possess. To be free of Outer Hell's influence, to let it wither and die. To be a human again... not a monster or a serial killer."

"No. Just... forget. That's all. Who you are would never return. You would know nothing happened and only recall the basics of your life with your family."

Kara went silent for a moment, puzzled by the offer. "But... I would still be the one who caused all of this. Did these things... even if I didn't know. Right?"

"I can't change reality," the spider woman said darkly. "But I suspect no one but your aunt would know. There isn't anyone left, from what I can tell."

The witch again went quiet. "I... I'm not worthy of that. I know... that I don't deserve forgiveness for what I've done. And I'm doomed as I am. I know that. Then... if you can do these things for me, perhaps you would do me one more favor."

Bali raised a brow. "What is that?"

"Even if I never remember any of this... maybe, you would come find me one day. See if I've changed at all for the better. Either by instincts or how I'm raised. And let me know what I've done. Because... living is the difficult part, right? And maybe, if I'm truly free of this corruption, I'll be allowed to try and make things right with whatever I've got left in me."

The spider woman was perplexed to say the least. "You might not believe it if I tell you, Kara. And it might destroy you to know it."

The witch stopped crying, now having grown resigned. She adopted a somber reflection with wet tears on her cheeks. "If I don't believe it, then nothing will have changed from what you first proposed. And if it destroys me? Well... there's an old saying from before the end of the world that goes something like, 'That which can be destroyed by the truth, should be'. If I can't make things better for all I've done in this life, I don't want to live the next forever innocent and ignorant. Hopefully, I will be a stronger person when it comes time and won't take the easy way out."

Calmly, Bali seized Kara with her many hands, and held her face between two of them. "...very well."

"I just wanted to say it one more time. I'm sorry. For everything. I know I don't deserve any of this mercy from you... but... thank you. I don't know why you bothered for a complete stranger and a monster like me. But, you're the only one who cares in the end. I'm sorry I punished you for it. I hope... I'm less of a fool next time we meet. Do... whatever you must do. I'm ready."

"Mm. Until next time then, Kara..." nodded the spider woman, now serene and esoteric.

In Bali's tribe of spider people, they made it clear. There was always more than one way to assassinate a target. But few would do it out of compassion and kindness.

You only see the true eyes of a demon once he (or she) comes for you.