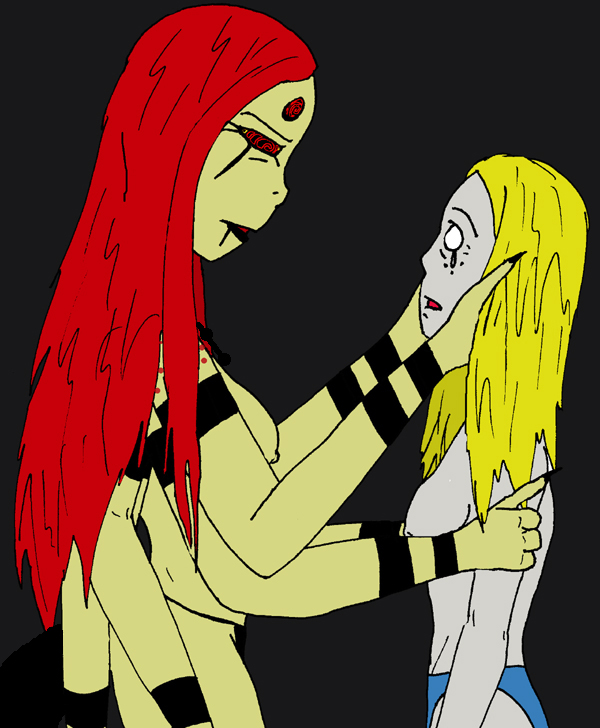 In Xibalba, the subject of a life after death is sometimes a tricky one. Having no gods to swear upon, the beliefs of the Xibalbans was philosophical and sometimes cultural to the individual clan itself. Many, however, kept it to themselves. There was no reason to insist on one path or another for them.

As such, some Xibalbans had a rather viking-like view of what laid beyond. Should one have lived valorously (within a clan's definition), died in battle, and lived in accordance with the world, they would become spirits. From there on, they might guide their descendants when called upon, send them signs, or move onto the next plane of existence where the spirits surely resided, whatever that was.

Some, dying lost and seeking something in futile desirous obsession, would be rendered into a ghost, in particular. Ghosts were well known all across the world, seeming to live in snippets of their pasts, trapped in echoes of whatever drove them, only to repeat the moment ad nauseum.

Of those living to grand age, many were known to grow tired of the world or to find themselves taking up room where a younger generation might make their own legends. This was commonly seen in those reaching two centuries, rare as such survivors were. Those possessed of such a mind simply 'walked into the horizon' and never returned, existing as myths and legends in their own right. Perhaps there was a place one could sense with blood at such an age and it called to them?

Of course, many Xibalbans were utterly nihilistic. Simply put, there was nothing. They returned to the earth, broke down, and were recycled into base components. This was perfectly honorable. One ultimately gave back whatever they took and the cycle of life continued. The nothingness freed them of suffering, trauma, and longing, as all books would eventually end and all readers would join such stories ultimately. As Xibalba was cruel, death was merciful. One did not need glory or ambition when becoming one.

'And where would I go, wondered the witch? To be here, and not here?' She would not remember the answer, but she would know it all the same, even if she wasn't aware. Karolina would be freed of her Kara persona and Outer Hell. While alive, she would effectively be reincarnated as herself.

Bali gazed at her possessively with her hypnotized stare locked upon the young woman, until nothing but instinct remained. The gift of her eyes was not tied to the Song, but was merely an ancient technique taught to her as part of her training as a clan courtesan. To use it briefly, she could compel a creature to most any task for a time. But to use it like this upon the weak willed and uncertain for hours would leave little else than a slate and natural born instincts. This too, was just another tool in the chest of the clan of assassins and why they were so feared. But even an assassin could show mercy, even if it wasn't the finest of ideas. Reckless, they would often call Bali-la.

Sometime later, Karolina would be returned to Adelaide with no memory of anything amiss. It was as though nothing had changed except for the parts no one else could see. And some years later, Bali-la knew she had to visit the witch again and make sure her earlier persona didn't somehow slip back into reality. And so, they had met again for the first time, and this is how two enemies could become friends.

"And that, Karolina... is the story of you and I," Bali finally concluded, heaving a sigh of tired relief after holding onto their secret reality for so long.

Karolina had listened, diligently, but stone faced. Bali expected little else, in truth. Because the truth hurt. But it was something a friend should tell another friend, if they meant it.

What a tangled web we weave when we practice to deceive.