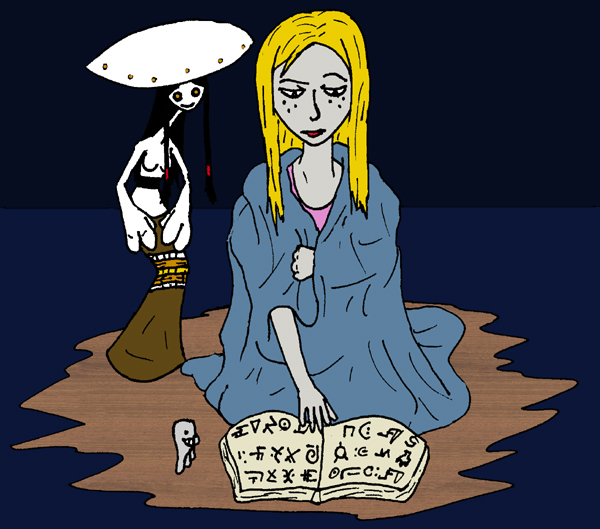 (Okay, a color page once more. It was just a small one.)

For a time, Rottkap consoled Karolina while the cousins reconnected outside along the water front. The little mushroom girl didn't know exactly what to say, as she observed Karolina weeping into an old blue blanket. Sometimes, however, it was best just to be there, so she patted Karolina and spoke in soft tones that 'things would be all right'. Rottkap didn't know such a thing for certain, but sometimes problems and downfalls had a way of casting a bigger shadow against a wall than what composed them. Maybe it was best simply to envision an unhappiness that way, she thought. What was the old world human saying? 'This too, shall pass.'

After a time, Karolina calmed herself and rubbed her eyes. She looked at the mushroom girl with a somber but appreciative smile, and Rottkap knew it had not been in vain.

"So, we'll go tomorrow. But, it occurs to me that that leaves a loose end, now doesn't it?" the shovel witch said, as she grabbed her nearby spell book, flipping it open. By now, Tom Thumb appeared quietly, having slunk out of whatever corner he had been hiding in.

"Yes," Karolina affirmed. "Among things, I need to stop being such a goddamned cry baby. I need to get things done. There is something I've meant to do, but this moves the time frame up."

"There's literally a buried head just outside the cabin here. I've put this on the back burner far too long. I want to try resurrecting her again- give her another chance at things without stupid alligator thugs around."

She looked to Tom. "Question."

"Answer," he said with a cheery shrug. It seemed his magical expertise was being called upon.

"Is it possible to raise a zombie twice? Particularly with just a head?"

Tom blinked with his weird little empty eyes, maintaining his frozen grin. "It's hard to say. Each spell a person knows is technically unique, even if it's similar to those possessed by others. Typically, a spell that raises a corpse just animates the existing components. Not to say Brand has a lot of experience on this front, but from what we know, a zombie might not necessarily arise twice from the same spell twice. Perhaps because the body is it's own expendable magical component. And sometimes a body is just too broken down to make use of, as I understand it."

Karolina flipped through her book, listening. "So then... what about a spell that I didn't understand completely but tried anyway? Because that's what made her rise the first time. And even then, I was attempting to restore life rather than a zombie. I might understand it differently this time. It's been a while, after all."

"Wait. You tried casting a spell you didn't know? That's the kind of thing that opens up a caster to being cursed, Karolina. I can't recommend it. There's no telling what would happen."

"Exactly. There's no telling. Maybe it won't do anything. Maybe it'll be spectacular. At the very least, it won't be the same spell expression again, most likely," she said, sounding uncharacteristically bold. "So that gets around one potential problem."

"While making another," warned Tom. "Karolina, curses are often very hard to remove, and even Brand can't do much on that front. You are gambling on poor odds here."

"I have to try. I can't just leave her," the witch reinforced. "Ah, here it is... yeah, I have very little idea how I even did this the first time. This is definitely more advanced than the other ones I know. Rott, can you let the others know that I'm going to attempt to cast a complicated spell to revive Siouxsie? They might want to get a bit of distance from this."

"I think... I think I have a better idea of how this spell actually works this time. It's complex, but it doesn't seem as overwhelming now."

"I know, I know. This is an enormous risk for what seems like little return. For someone you guys probably think I should just leave in peace. And with some shoddy spell theory. But I can't. I'm responsible for Siouxsie. I wasn't who I needed to be for Bali or for Siouxsie. And now they're both gone. Besides... Siouxsie called us friend. No, I've made up my mind. It's time to take a risk, Tom. I need to make things right again."