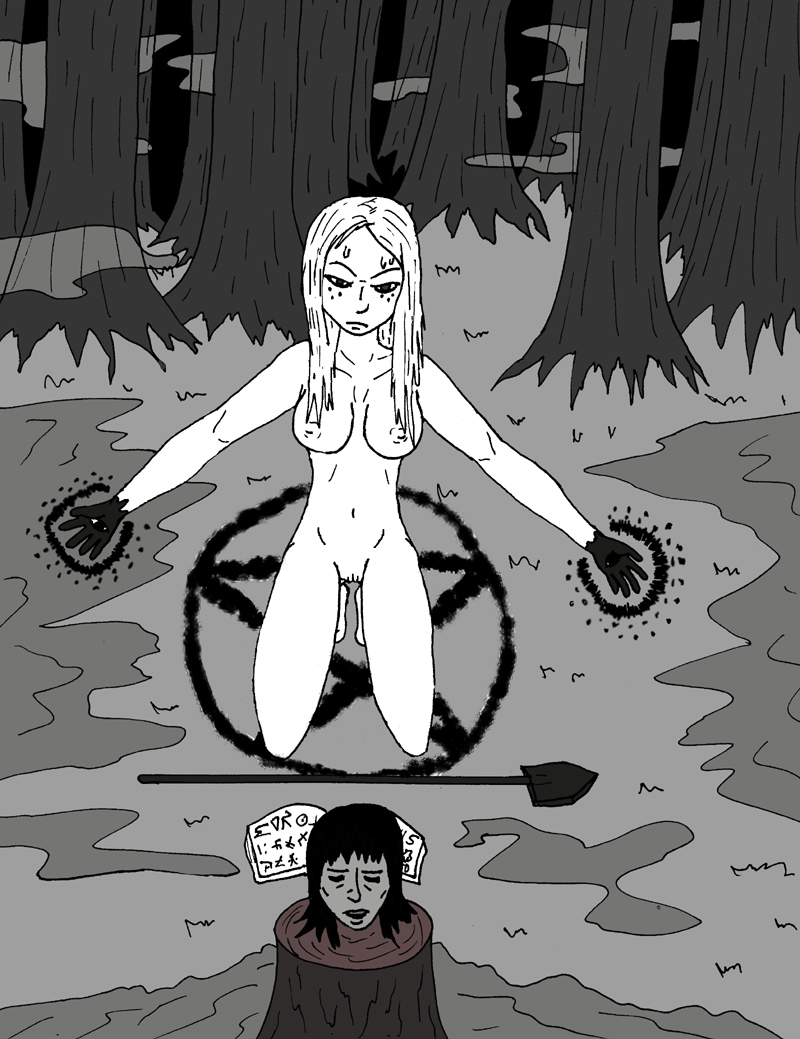 Outside, I began to dig up Siouxsie's head as I noticed Rottkap explaining the situation to Beltresz and Tulsan. I couldn't make out their reaction precisely, but I'm sure they were uneasy with the idea. Everyone had reason to be.

Although I often looked at it as a chore, given all the years of burials I conducted in Adelaide, I found the act of digging to be somewhat calming in this time. Tom was probably right. I had no damn idea what I was doing and the chances of this backfiring seemed pretty substantial. I mean... they were, weren't they? I started to wonder how I got through this the first time. Was Siouxsie the one punished due to the spell being cast wrong? It seemed like it- I'm not sure what could have been directed to me. But then again, my aunt Ruukunda had chicken feet-like hands from what she did, so...

Holy crap, I really don't know what I'm doing, do I? And yet, I'm still adamant about doing this. Why? Am I doubling down on a lost cause to make a last minute turn around? Is it for Siouxsie's sake or more my own?

I don't know. I barely understand this world. I'm a novice even at life. Even this talking hand knows more than me. My head is mixed up and jumbled on so many things, it feels hard to focus. Hrm. That's not a good thing... but that's when I noticed Brand's little familiar nearby again, probably watching to see how well I might muck this up.

"You're really going to do this, huh?" he squeaked out. "I mean... you know you have a lot of shadow essence. And we've been practicing for a few days, but spell misfires are just asking for it, Karolina. If I knew you were going to do this, we could have tried having you practice the intonations of the runes, at least..."

"Yes Tom, you've made your point clear. And you're not wrong. But let's deal with the situation at hand. If you have any advice you can give me, I'd love to hear it now. For the record, I'm going to incorporate that thing you told me about getting a mark of Chernobog to finesse this a bit more. Chernobog's symbol is a hand with an eye on it, so what if I use some mud to paint that on my palms. Would that work?"

"Good. Now, you said this was unlikely to work. That implied there was a chance it could, however. Soooo... is there a way I could hedge the odds in my favor?"

"Well..." the hand began thoughtfully. "I like the idea of not being blown up inadvertently, so... sure. Okay then. Now, as a witch type of spellcaster, you have focuses, right? You remember that much?"

"Yes. The wand, which is my shovel. And uh, a witch's cap, right?" These were basic things Ruukunda taught me, thank goodness.

"That's... somewhere in Longtooth territory, I think. They didn't exactly leave me with much."

"Lovely. Well, that's half the battle, I guess. Okay, next... you need to clear your mind. Concentration is key. Take your time, cast deliberately, and don't distract yourself. That's basic enough. But as a witch, your focus should also come from a focused state of passion."

I blinked. I had no idea what that meant. "Come again? I don't follow."

He sighed. "Okay, think of it like this. Your strength of magic, in this case your natural shadow essence, is raw furious energy- in fact, imagine it as a storm you want to control. Your tools and sense of focus are a jar you're going to keep it in until you need it. Now, a state of focused passion are your hands on the top and bottom of that jar, holding the whole thing in place as it shakes about violently, trying to erupt without direction. You're trying to bottle the storm in a jar and your determination keeps the lid in place. Does that make sense?"

I nodded after a moment. "Kind of. I think I see what you're saying. But what is focused passion? I've never heard of that."

"There's proper terms for it, but just take the phrase contextually. Regardless, ask yourself why are you casting this spell? Why are you focusing these energies? You need to put yourself into your magick. It's your blood. Your shadow. It's you. Funnel those thoughts into a zoned state of mind to a single purpose. Become one with the magick. Look at it as an extension of yourself and not a tool. It's as close to you as your hand. Drive it with your will. Become the magick!"

Become the magick? I never thought of something like that. It always seemed so abstract and alien. But maybe he was right. After all, the spells and rituals in a spellbook are unique to the owner. It's... it's like a poem one creates, I think. Everyone else can hear the end result, but it has the most meaning to the one who wrote it. A spell... is similar, perhaps.

And as for passion, I've usually been anxious. Particularly in the last however many days it's been since I left Adelaide for the first time. But when I was angry at the Longtooths that one time, I found my spell formulas were strangely easier to recite and cast. It was focused, right? But wait... when I cast this ritual the first time, I was trying to bring back the dead... and...

I was thinking of my parents laying in the bones of so many others. Oh... oh, I get it now! I understand what the focused passion concept means! I have to put myself into whatever pursuit I'm using the magick towards. And my motivation can help with that.

He grinned as he ever did. "Great. Now, there's realistically one more technique I can suggest. As a witch, your connection to the world is literally through you and all over you. So, anything that gets in the way can cause more static to the flow of your connection to that magic, even if everything else checks out. Technically speaking, even in the past, many witches would open themselves up to the ambient magick both around and within them by, shall we say, removing as many barriers between them and the world itself. It's called going 'skyclad'."

"Huh." Weird. I never heard Ruukunda mention anything like this. "How does it work?"

"Uhhhh... simply put, you go without clothes. Or at least, as much as possible."

"Don't look at me like that, Kara, I'm just a walking talking hand. I don't have a frickin' libido, okay? But I'm not bullshitting you either. If you want the maximize the magical dweomers around you, you might want to get down to your skivvies or whatever. Or don't. It's your call and your obligation to try raising a zombie more than once. But hey! What does the talking hand who is literally a familiar know?" he bellyached in a passive aggressive tone.

I didn't think he was lying to me, but it felt a bit odd. That said, he knew magical theory and I really didn't whatsoever. I guess I wasn't prepared to hear it. And maybe Ruukunda didn't tell me since she was my aunt. Or that it might have come off as odd if I strolled around in Adelaide nude, casting spells. Yeah, I can see mom and dad just loving that concept.

But, what was I so skittish about? I thought back to the sand cave with Bali. I felt so comfortable around her that I didn't think twice on it then when it came time to call it a night. And she was rather comfortable in her own skin, wasn't she? She wasn't a mage and she barely wore anything. And then there was the Longtooths too. No clothes there, really. And Tulsan doesn't even seem to own a shirt. I could even say the same for Saiya when she was with us, now that I think about it.

I guess Xibalba doesn't care much about modesty. Especially not with all this heat. Well... alright. If skyclad is a legitimate thing, I can't afford to not take advantage of whatever magical dweomers are. Tom hasn't steered me wrong yet. And I feel like I've learned a lot more in a few minutes than I have since forever, frankly.

Deciding to bit the bullet, I prepared a pentacle circle on the ground as the spell required, stripped down, and decorated my hands to resemble Chernobog's symbol. Alone, I focused upon Siouxsie's head, which I placed on a nearby tree stump, and began to chant. I felt a little ridiculous, but at the same time, like I was getting into magick for the first time. In any event, here goes...