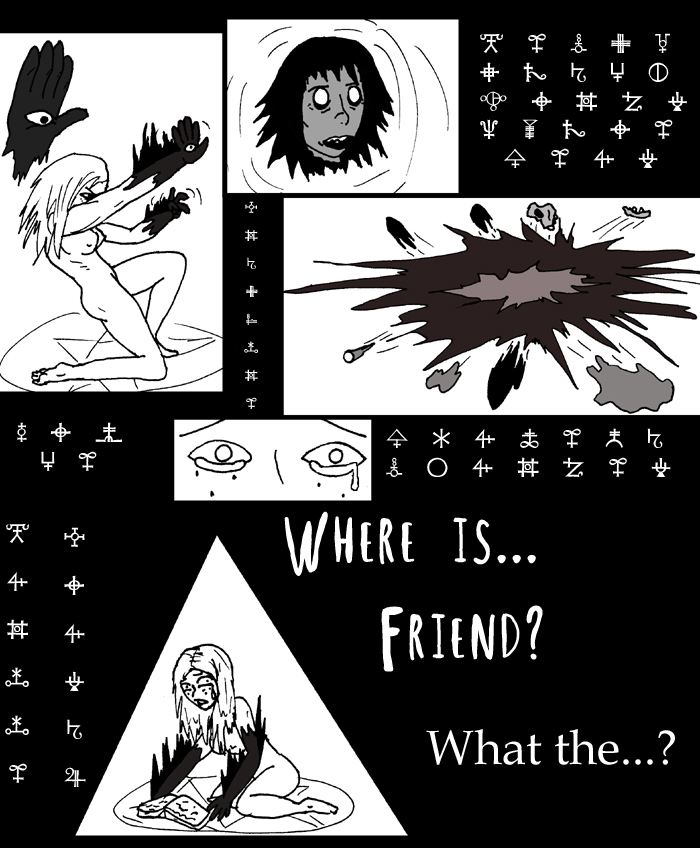 With all my concentration, I focused upon the ritual I so infamously botched the first time. Despite my better grasp of it and the fundamentals of witch magick that Tom advised me about, it still seemed 'off', but I couldn't figure out what I was missing. There was perhaps a subtlety that I wasn't experienced enough to get, but I decided to press on, spinning the wheel of fate. Maybe I figured I was due for something halfway decent for once- law of averages, and all that.

Surprisingly, the spell felt more natural to me than I would have assumed. Maybe because I simply let myself 'flow' and pour myself into the task? If that was the case, it wasn't too different from the zoning state of mind I'd get from digging for hours. Yet, this was certainly more dynamic and risky. Excavating a plot for burial really wasn't that complicated, comparatively.

However, before I was even half done, my arms burst into black flames, thankfully harmless to me and without real heat. I was too focused to notice them immediately, but it scared me less than perhaps it should have. It was the same kind of shadowy fire that erupted forth when I fought the Longtooths. I wasn't sure how it happened then, nor how it did now. But I recalled how it made it easier to cast spells when it occurred that one time. And the energies flowing through me felt ever stronger. Regardless, it was too late to stop things now... Siouxsie's head began to levitate and tremble with a glow from her eyes. I was doubling down on whatever was going to happen.

Suddenly, the head exploded with a loud burst! I gasped, as her remaining flesh, teeth, and hair ejected in all directions, leaving only a foul mess of dead flesh and my own quick-to-realize shame.

I remained kneeled, transfixed, and horrified. This was not supposed to happen!

Yet again, I did this. I ignored Tom's warning- surely, this was a spell misfire because I'm a damn novice. And Siouxsie's remains were defiled by such a crude effort. There was almost nothing left of her.

I couldn't help it as my eyes teared up, wracking my mind what specifically went wrong, but I knew it was because I wasn't skilled enough at this. I was a child, trying to act tough, playing a dangerous game of consequences that I was terribly inept at. It seemed there would be not even a small victory for more today, for-

Without my expectation, I saw faint movement from beyond the circle I cast the ritual from. I paused, only then to hear something distorted.

It was mechanical sounding, distant and yet close. The voice sounded hollow, quiet, almost alien. But the phrasing was uniquely hers. Siouxsie...

What came forth from the darkness of the swampy terrain made my knees unsteady. This time, I had really done it. And what that was, I wasn't even certain, only that I was unequivocally responsible for what transpired, as my heart beat in terror within my chest. I had toyed with something I truly did not understand.