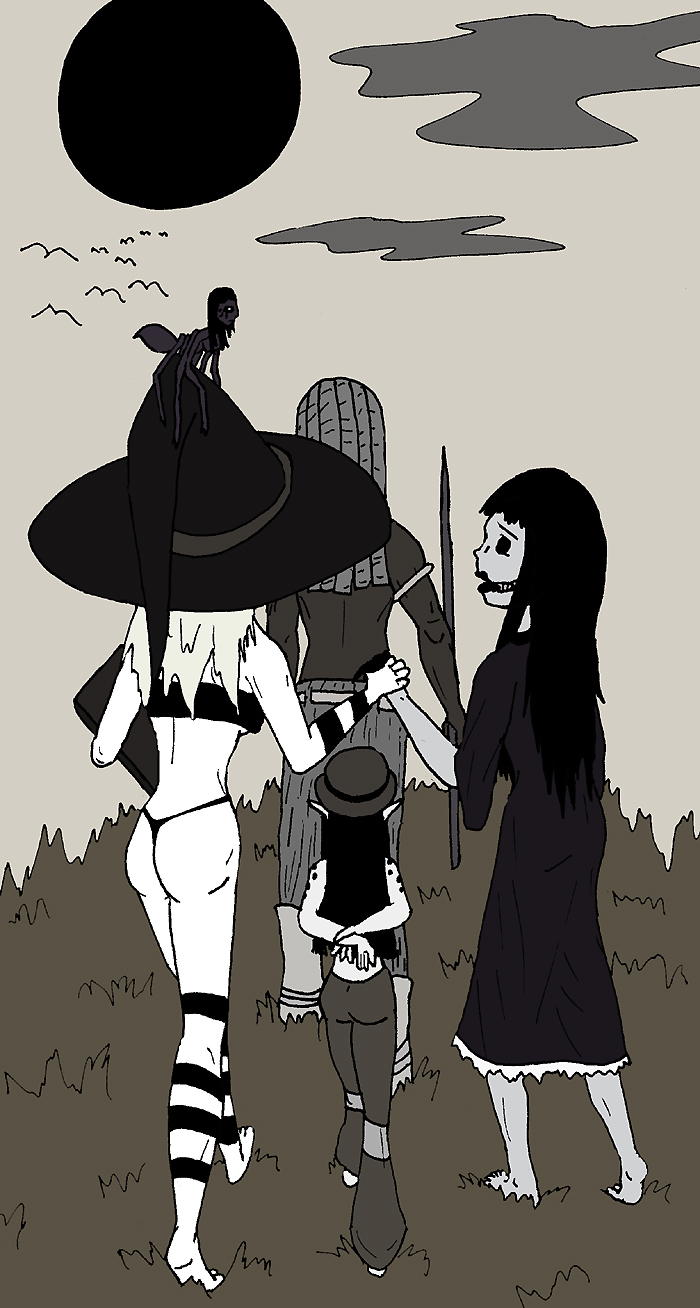 With Beltresz departed back for Brand's camp and everyone else regrouped, the morning in the swamp was spent foraging and hunting. Tulsan gave suggestions what to look for and to stay within eye sight of each other, as wandering away just a bit too much on an unfamiliar journey through Xibalba's ever shifting landscape would be very dangerous. Karolina had an understanding of this by now, but she assumed he mentioned it for her sake anyway, if not for Siouxsie. He was aloof and business-like today, which was not uncommon from what she gathered of him, but sometimes she wished he would relax a little and talk more. It was hard to tell if he was bothered by Beltresz leaving or just being his distant-yet-on-point self. And not that she knew, but there was a potential third reason for his mood based on how she threatened the angel thief the other night.

Pickings were slim at first, but with everyone working together, they managed to scrape together enough food for the time being. This was further helped by Rottkap having a great familiarity with mushrooms, as she was able to easily point out the safe ones compared to that which were dangerous. Karolina found the edible fungi were fairly appetizing despite their initial blandness. Meat was a bit scarcer, although they did find a bayou python worth splitting. Additionally, the food supply was further spread out as Siouxsie would seemingly eat anything flesh related, as she asked if she could have even the discarded bits, such as skin, bone, or offal.

Once chow was done, it was time to resume the long horizon-less journey to Uluru. Much of the time was spent quietly, traveling under a warm black sun and orange sky. For what it was worth, Karolina and Rottkap's spirits were good. The little fairy seemed to enjoy the idea of using her legs to walk and her stamina was impressive in keeping up with everyone. The witch herself was still emboldened by Beltresz' parting words. Sometimes a little morale went a long way.

Shortly into the hike, Siouxsie approached the shovel witch. "Friend Karolina?" she asked, seemingly keeping her voice lower than not. "May Siouxsie speak?"

"Of course," replied the witch.

Karolina looked the zombie over. The undead seemed troubled by the possibility. It seemed more self aware than she ever heard her speak before, even if the worry was unfounded. "Oh, Siouxsie. I don't think that was the case. Beltresz had trouble breathing out here. The fight just showed how much trouble she would have in this air if something like that happened again. She didn't blame you when I spoke to her."

Siouxsie seemed to ruminate about it. "But... friend Beltresz did not say good bye to Siouxsie, either. Me wake, and friend was gone."

Karolina sighed. She couldn't guess if Beltresz simply didn't care about the zombie or she didn't want to wake her at the time. She also remembered how Beltresz mentioned that she had trouble making friends with anyone.

"I'm sure she didn't mean anything by it, Siouxsie." It was a diplomatic assurance, but the witch couldn't know for certain. "Maybe we'll see her again someday. I don't think she had anything against you."

"Don't take it personally," came another voice, this one gruff sounding. It was Tulsan, who apparently overheard. "She's just prickly." He shrugged. "Both of us are like that. We grew up a certain way. Just assume we're slow to get comfortable with anyone. I talked with her too, Siouxsie. She didn't have anything against anyone when she left. It was literally just a health issue. When she became a Xibalban, she developed changes to her lungs that make this air too thick for her. There's nothing more to it than that."

For everyone, it was good to hear. Although Karolina had been told by Beltresz how things between them were, it was nice to hear Tulsan say it. He seemed like a relatively straight shooter to them, not particularly akin to lying or embellishment.

Siouxsie seemed to accept it. "Is good. Happy. Siouxsie... sorry, everyone. Be smart more, next time."

"...Not to distract from this moment, but be advised," said Metis, who had been riding atop Karolina's hat like some watchful bird. "We are being watched."

"Huh?" Everyone began to look around. They were in a damp rolling plain of puddles and brown swamp grass. There wasn't much around beyond some boggy land and scattered trees.

Tulsan quickly came to a stop. "Where?" he insisted.

"There is a copse of trees to our right. I see a humanoid form there, but I can't make out more details."

The group turned to look in unison. They were so previously distracted that they failed to notice. Only Metis, who seemed detached from the conversation, managed to see the individual at first. Tulsan quietly cursed his momentary lack of observation.

They couldn't make out details but the humanoid continued to just stare at them from the outskirts of a small grouping of trees, unconcerned if they were being observed as well.

"Well, whoever it is... they're not necessarily afraid of us. They've got cover to retreat into as well as a head start," said Tulsan.

"Maybe they want us to come over and say hi?" suggested Rottkap more innocently. "I mean, if there's trouble, we do outnumber them."

"It could also be an ambush. We shouldn't assume anything outright," he surmised. "Why don't they come to us then? Karolina, I'm just a guide here. You're the Alpha- how do you want to play this?"

She took a deep breath as the weight of decision fell to her. She could imagine Beltresz watching her, judging. "If this person is a local, they might have useful information about what's around. Maybe even a shortcut. That would be more than we have, right?"

"Let's approach. But don't draw your weapon. Not yet. If it seems shady, we'll back off. If this person proves to be a problem and follows us later, we'll deal with them as a group on our own terms."

"I believe... they're waving at us?" said Metis, squinting.

"All right. Let's see what they want," said Karolina. "But let's be cautious, everyone."