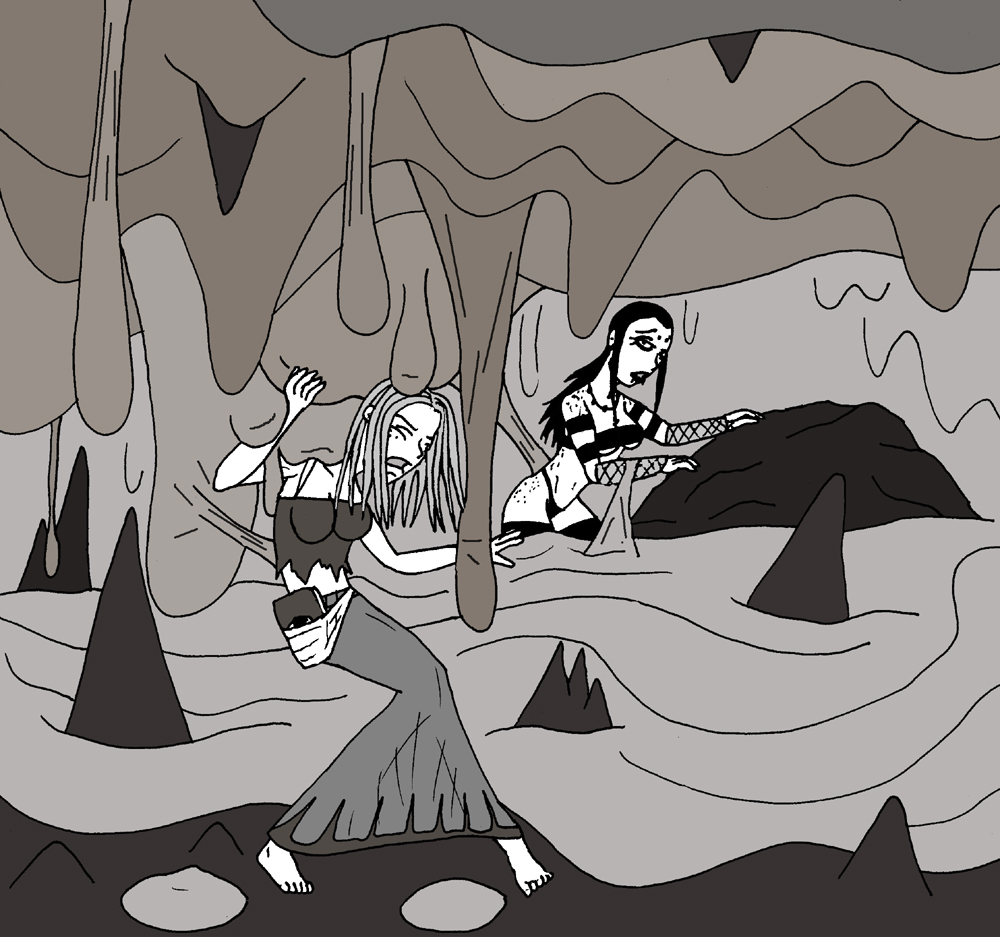 And trouble was easily found, true to Bali's assessment. They two had just started to run when the very ceiling seemed to fall around them in moist squelching plops. Amber toned jelly landed in clumps, while other places oozed unpredictably. And for what seemed like a small initial patch of the gunk, it quickly revealed itself to be insufferably vast, extending into numerous globs and patches. Whether this was all one creature or a colony of amorphous protoplasm, even Bali-la didn't know. But it did begin to descend almost in unison, with one part stirring a chain reaction in the rest. The slime fused rapidly, demonstrating a limited sense of independent movement beyond simply dropping to the floor below.

They ran, but only made it a short distance before a veritable mine field of the stuff manifested all over the stony cave floor. It piled quickly into gooey drifts of slime, surrounding and obscuring the stalagmites around them. The situation was going from bad to worse by the second.

By mere chance, Karolina managed to elude the slime, although she dropped her beloved shovel somewhere in the process. Bali-la, unfortunately, had run into a mass of the stuff after it fell before her. She soon found her legs wading into the gelatinous life form and her pace became more of a determined shuffle, as she searched for some method of escape. Her orange eyes settled on a stumpy boulder-like formation, which sat just above the slime like some tiny island. She struggled to move upon it, grasping the stone before her in both hands. Although even she knew if she could extract herself, this safe spot would be anything but secure shortly. Seeing Karolina slightly ahead of her, she called out to her friend. "Kara, just keep going! I know I said not to split up but I don't think we have a choice here." Grunting, she tried to pull herself onto the rock, but she couldn't seem to get traction or pull free, as the slime mass was dense and somewhat sticky. It felt tight around her legs, as if surface tension and the sheer volume of the ooze was trapping her almost by pressure alone.

The shovel witch hesitated, glancing about rapidly. She was searching both for where she dropped her spade and where this monstrosity might end, but she found neither. "I don't know where to go! This crap is everywhere!" In truth, while scared, she didn't want to abandon Bali-la either. She couldn't imagine going alone under these circumstances, let alone knowing she left her new friend here to some terrible fate.

"Just run, worry about where later! You have to get to the edge of this stuff as soon as you can!" Bali called out, straining to wriggle out of the sludge. She felt a slimy strand then hit her lower back. It seemed to tether to her skin and gently begin pulling her away from the rock. "Damn my luck today..." she groaned, desperately gripping the pseudo boulder even harder.

As for her companion, Karolina seemed to take only but a single uneasy step when the ceiling mass lowered more and a large portion fell upon her back and scalp. She shuddered and for a moment, buckled under the surprising weight of the goo. "Aaagh... good god, it's wet and gross!" She tried to push it off, like some unwanted burden, but the slime seemed to adhere to her and begin absorbing her flailing body into itself. The jelly was cool and viscous to the touch, but as far as she was concerned, it was only some disgusting horrible entity and it warranted no other description.

Bali looked on at their dire situation with growing concern. Although naturally positive natured, it was clear they weren't going to get out of this easily, if at all. She now realized why the Longtooths would not willingly come down here. And she wondered if Rathalos had not simply given them a fake story concerning the Ophidian, if she existed at all. If she was real, it was quite possible that this Saiya person died down here some days ago. And perhaps Rathalos sent the two heroines down here to die cleanly as a twisted act of some mercy, instead of a slow suffering existence as living food stocks under the deep hunger of the Longtooths.

Whatever the truth, Bali had not given up yet. As long as she was alive, there was some chance to be had. Most Xibalbans actively believed that as a daily dogma. Yet, as her body was slowly being pulled away from the safety of the rock and the two girls were gradually being enveloped, she had to wonder just what that possible chance was.