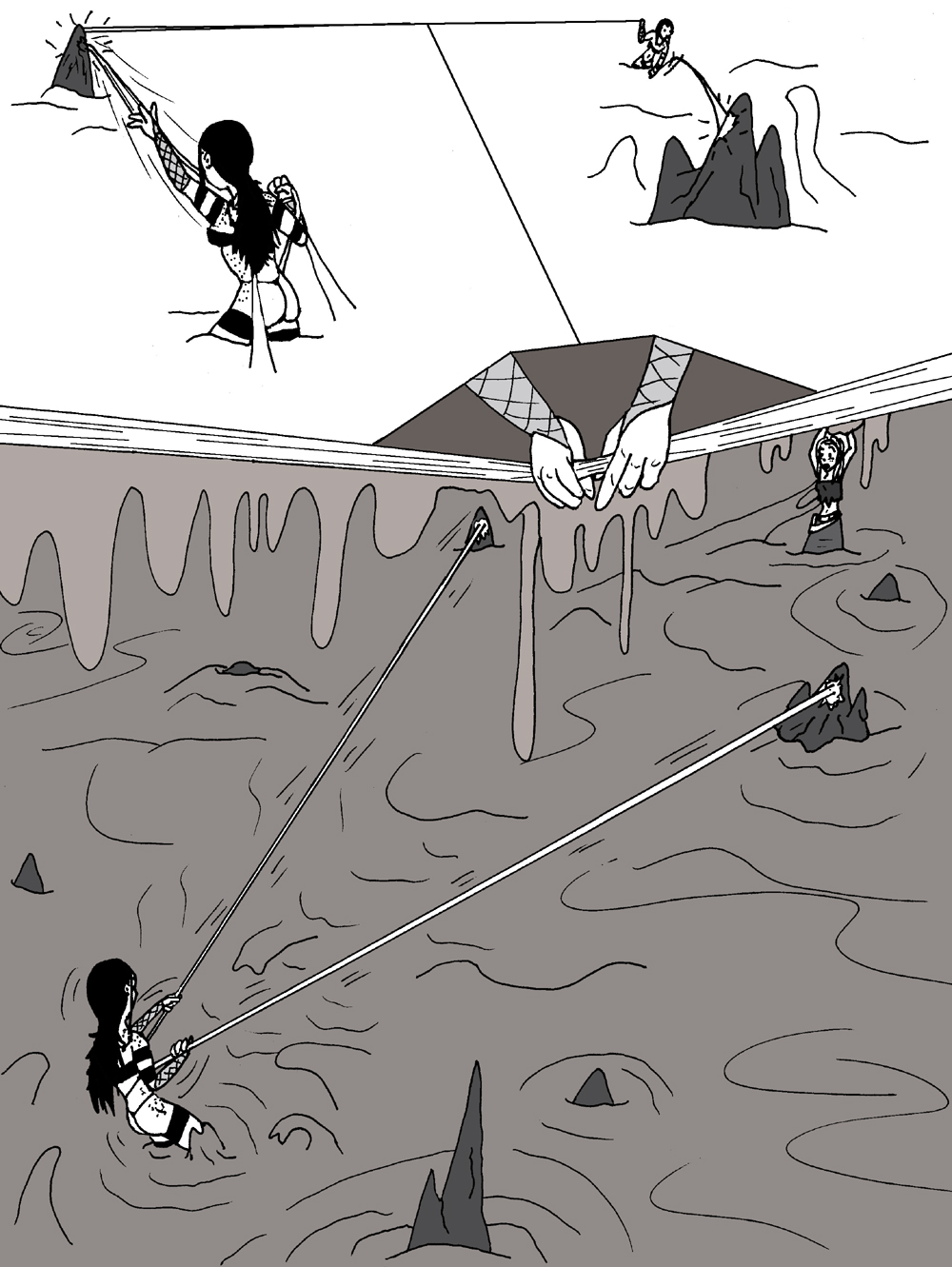 Getting down to business, Bali reeled and spooled the webbing she created into her arm, looping it several times over, as she fed the line to her free hand. Taking note of the few tall standing stalagmites not yet covered in slimy goop, she swing the web line around as if it were a chain. Webbing was not something that lent well to this at all. It was light, tended to catch the air, and had virtually no weight to it. But Bali was no amateur with weaving. Her interest was simple in concept. She would hurl a cord of sticky silk to two separate vertical pointing rocks. She gauged the distance, moving as best as she could in the viscous mess, and slung a cord at each of the two stalagmites. Only because she had practiced this for fun was she able to reach the stones at all. It took a gentle, but very certain throw to get any distance. But in the end, it worked. She now had a silken cord attached to the two rocks and her position in relation them made the outline of a triangle.

Next, she fused the two web cords together, which was easy enough. Her silk, so long as it was sticky by her decision, readily attached to other webs of her making. With a simple twist, the two cords became one. She then positioned the fused web cord behind her lower back and slowly began to walk backwards with it, carefully stepping through the ooze as much as it would allow. Moving segments of the slime seemed almost confused that she appeared to be walking deeper into it. Pseudopods rose to meet her as others slunk back into the slime, but the ooze was ultimately content that prey was moving deeper into its mass. It meant less movement and energy was needed to trap the victim, after all, so it did not become more aggressive.

Karoline managed to pivot around to get a better look at things. There, she found Bali-la was stretching back against a taut line of silk of her own making and she immediately realized what was about to come.

"Bali? Are you... are you about to slingshot yourself? Does that actually work?"

"Yes and yes. We work with what we have, Kara," Bali said with playful glee, despite the situation. "As I said, this is going to be a bit rough for you, I'm sorry to say. Get ready!!!"

"Oh shit..." said Karoline with a clenched jaw. With her arms lodged into the slime above her head, she couldn't protect herself from what she knew was about to come. "Crap. I'm ready as I'll ever be!" Karoline tensed her body for the living missile that was about to come, hoping only that Bali wouldn't smack into her face from the incredibly acrobatic escape attempt.

Hey all. Just a short sweet head's up here.

Come October 15th, I'm moving to a new apartment and as to be expected, my internet will be down for a time until I can get things up and running. It's a very busy time for me right now, amidst packing and getting all the requirements squared away so I may or may not have an Arachnid Goddess 2 update next week. If I do, it'll probably be a simple splash page or a notice of brief hiatus.