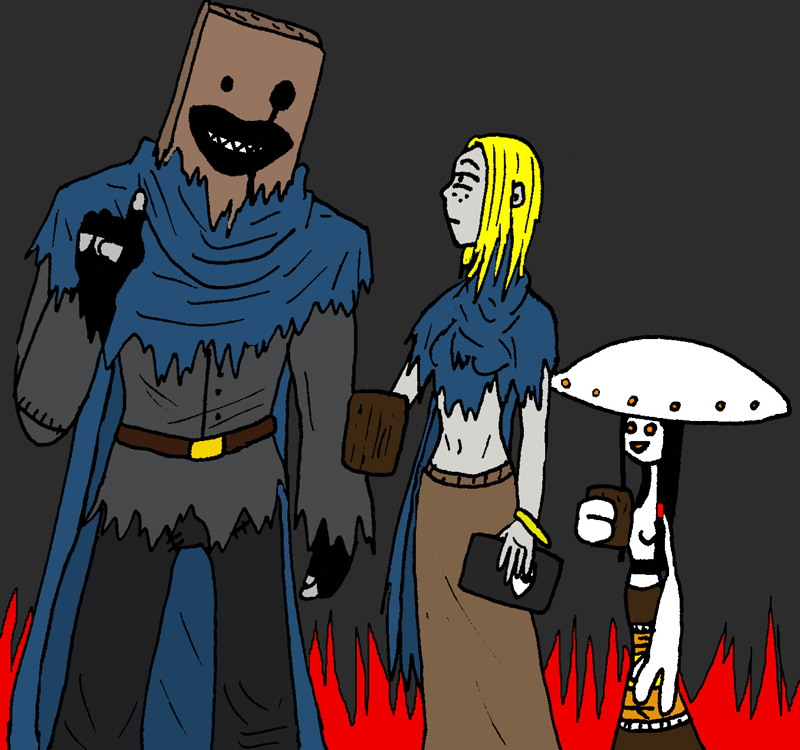 Brand passed Karolina and Rottkap a wooden stein of tan colored drink called Pepper Brew, allowing the shovel witch a moment to whet her whistle before sharing her story. Greedily, Karolina drank of the tall cup, almost indifferent to any idea of it being good or not. It was wet, and that mattered above all else. That said, it wasn't actually that bad.

It was certainly a beer of some kind. Even she wasn't so sheltered as to have never drank alcohol, although it wasn't something Adelaide had in abundance either. This drink was... curiously cool, despite the lack of any and all ice. The taste was a pleasant mix of spice, pepper (it tasted much as the red grass here smelled), and something faintly sweet. Perhaps yams or sweet potato? Either way, she found herself appreciative of it. "Thank you, Mister Brand. I really needed this," she said graciously.

"Please, just Brand will do," he responded in that deep eldritch voice. "What of you, little miss mushroom?"

"It's the best!" Rottkap announced, practically shouting. The cup was massive compared to her little dollop of a head, but her huge simple hands held it easily.

Looking back to Karolina, the paper bag headed man nodded. "I usually charge or make some arrangement for the Pepper Brew, but the first time is always free."

"Indeed. It's an old sales strategy, shall we say. Getting new customers is not always the easiest thing to do in the middle of nowhere, after all. And before you ask, yes, I do make it myself. The recipe is proprietery, unfortunately."

Karolina wasn't sure what that word meant, but from the context, she assumed it meant 'sacred' or 'hidden'. It wasn't important. "So what do you trade in? Do Xibalbans have money out here?"

"Money? Ha! You are a bit sheltered, aren't you? Ah, forgiveness. What I mean to say is, the concept of wealth has largely died with the old era of man. Some engage of the trade of commercial goods. And while I'm not against that, I consider myself more of a broker of information and opportunities, as they present themselves. By telling me your side of what happened during the fall of Adelaide, I consider you to have a bit of credit with me."

"Huh. I see... because the first drink is free, eh? This is good, but I probably shouldn't overindulge. I don't suppose I can get some to go for the credit?"

"As you are sans a wineskin, I'm afraid not. But, perhaps you would like to cover your chest, as most human women do? I happen to have a spare cowl and cloak in your side, if you're interested. It will also keep the flies off your back, I'm sure."

Glancing around, she noticed she was the only one here topless, save for Rottkap, although perhaps she didn't count since she lacked certain features on her breasts. Even the scorpion Xibalban had some kind of chest plate on.

Although she felt less self conscious since meeting Bali, the idea of having something more to wear still appealed to her, so she accepted, noting that this was the second time she was gifted with spare clothing since she left town.

Soon, Karolina was dressed and the cowl just managed to cover her. It was surprisingly comfortable and she liked how the ragged cloak, just as faded blue as his was, seemed to flow in the breeze. He was even kind enough to lend her a comb, although she wasn't allowed to keep it. So, now there was the matter of Adelaide. It was not something she liked to think about for certain reasons. But a promise was a promise. And Brand, despite his bizarre appearance, had been perfectly fair to her. She still couldn't easily look into his vacant empty eye sockets, however. And the fact he somehow could speak through his sharp teeth while just vaguely pursing his wide black lips was taking some getting used to. It didn't look right.

Brand sat down on his wooden stump again and Rottkap, seeming to try and drain every last drop from her cup, sat down nearby. Others in the area may have been listening in, but they didn't join in close. Perhaps they weren't allowed?

"Where should I begin?" Karolina asked, finishing off the last of the refreshing Pepper Brew.

"While your life story might be of interest, I really wish to know just two things, my dear. You seem to be familiar with magick, I take? Tell me of that. And, pray tell, what exactly happened at Adelaide? I'm dying to know."

There's ol' Baghead. Haven't seen him in a while. This world sometimes seems a mix of "Mad Max" and "Alice in Wonderland".

The mushroom gal is cute, in a weird alien way.

That does make for an interesting fusion idea- Mad Max and Alice. I see where you're coming from on that.

As for Rottkap, I didn't want to make her too human looking because it's an easy way out on design theory if I did it all the time. The Xibalbans are supposed to be a medley of odd shape choices, with Bali on the more human end of the design spectrum and Rottkap getting into the weirder side of appearances.

One of the things I enjoy about your comic is how much you flavor you characters, both visually and with personality.